Few things can beat the thrill of cruising down the highway in a convertible. If going topless is something you’re looking for, then these three cars will hit all the right notes as you drive al fresco. 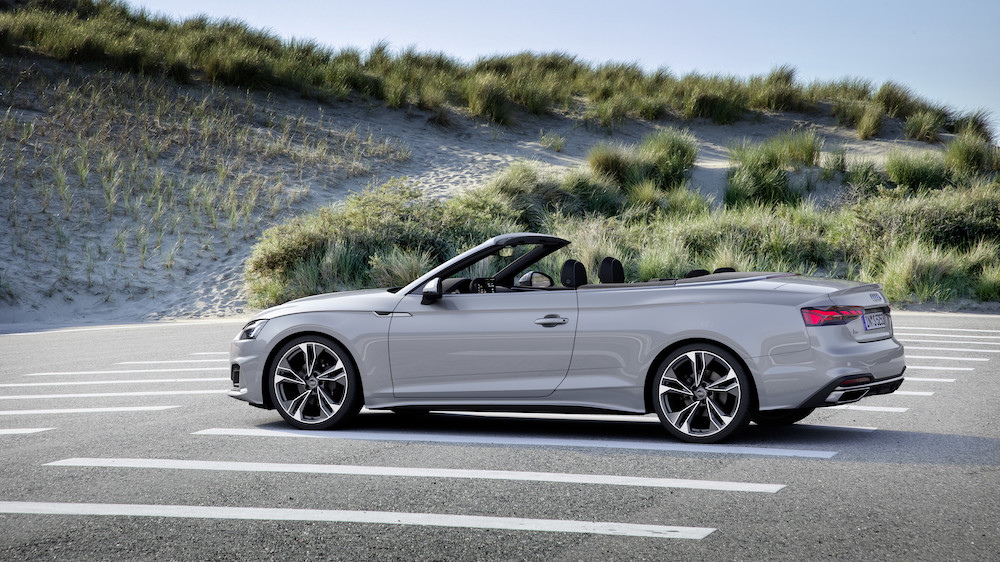 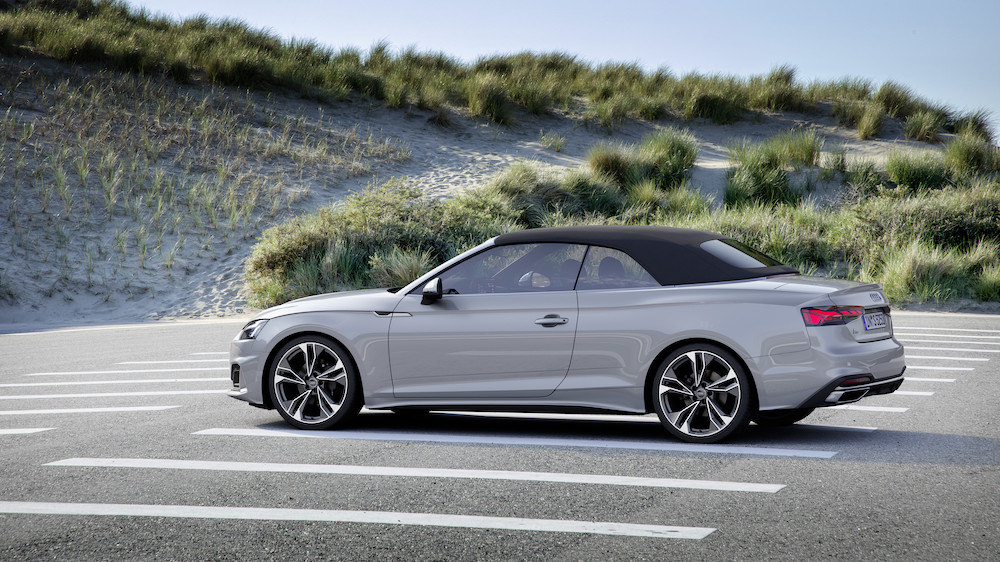 Whether you’re going topless or have the fabric top up, the car’s handsome proportions reflect its sporty disposition while exuding that touch of carefree chic. The first generation A5 Cabriolet came out in 2007; since then, Audi has tilted the design with new and sharper accents.

For the 2020 iteration, the car has had its exterior revised, with the Singleframe front end now boasting a flatter and wider honeycomb grille. The A5 Cabriolet channels the classic Audi Sport quattro of 1984 through the ventilation slits above the grille. Larger air inlets accentuate the bumper, where a bold blade now shapes the lower edge. The side silhouette is rendered slimmer with the new sill, and trapezoidal tailpipes with a diffuser insert widens the look of the rear.

Buyers in Singapore will receive the model in the advanced line. Matrix LED headlights and LED rear lights are now standard, and aluminium silver and titanium black accents on the border of the Singleframe and air inlet frames provide added elegance and sporty styling. And for that touch of customisation, buyers can request for an advanced exterior black styling package and door handles with chrome trims.

One of the main concerns with cabriolets is the quality of the top. Audi has perennially built some of the most technically advanced convertible tops for automobiles, and that is showcased here in the A5 Cabriolet. The lightweight cloth top has three layers of insulation to keep the cabin quiet. At the push of a button, the top opens and closes automatically in 15 and 18 seconds respectively. This can be done when driving at speeds of up to 50km/h if the rear seats are unoccupied. The cloth top comes in red, black, grey and brown.

Storage space has also been optimised. With the top down and stowed, boot capacity is a decent 310 litres (370 litres with the top up). And to accommodate storage, the split rear seat backs fold automatically forward when released.

Audi’s cabriolets have always seated adults in the rear comfortably, and the A5 continues this tradition. A wind deflector comes standard to help passengers keep their hairdos in check, and microphones integrated into the front seat belts helps with phone calls and voice function of the infotainment system when you’re roaring down the ECP. 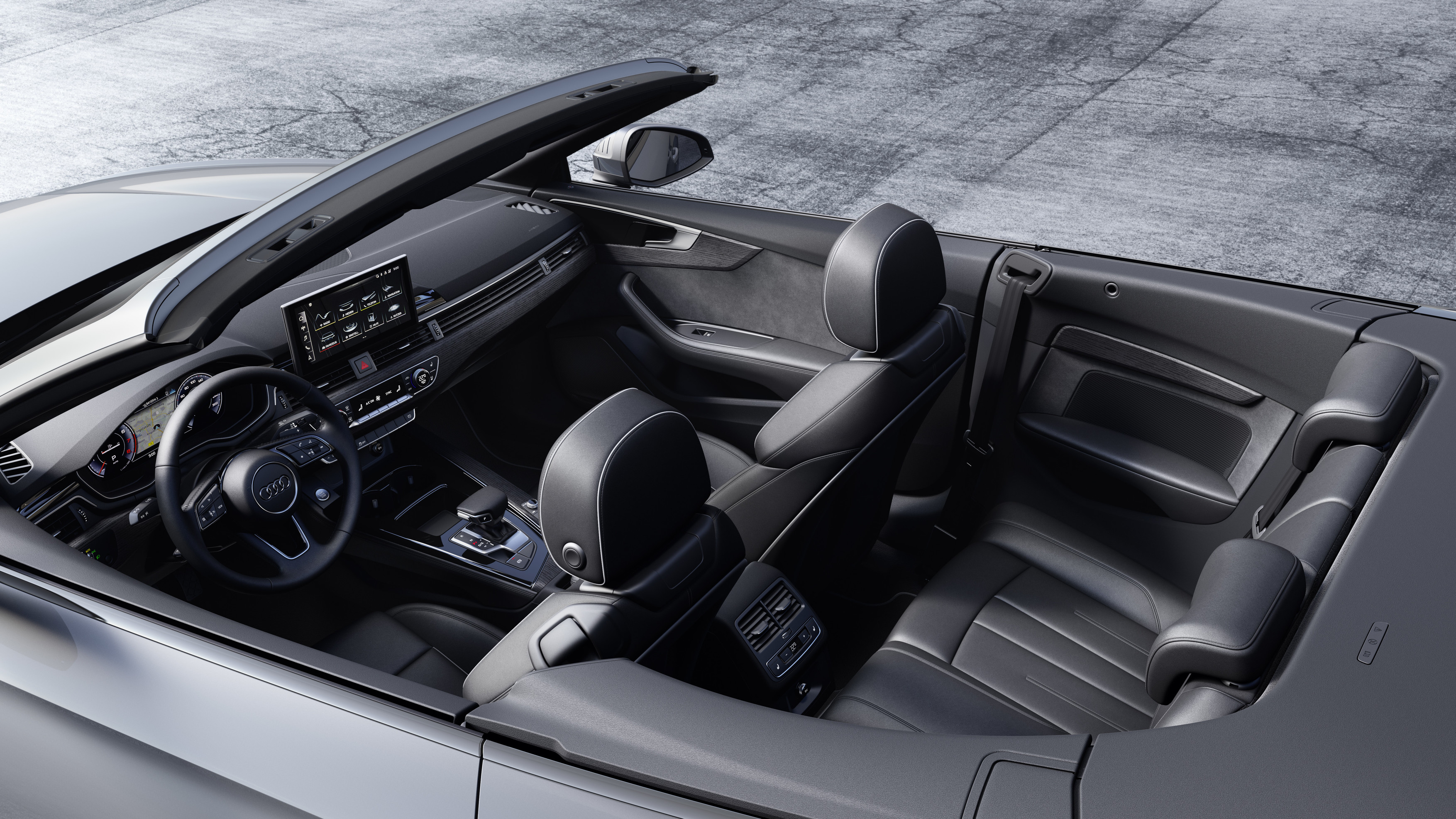 Of course, the Audi A5 Cabriolet is not all about good looks. An updated 2.0 TFSI engine puts out 190hp, and is paired with a direct-shifting seven-speed S tronic transmission. Fuel efficiency is enhanced with the mild hybrid system (MHEV) that integrates the 12V electrical system with the combustion engine, and features a belt alternator starter (BAS) that’s connected to the crankshaft for direct transfer of power.

With Audi’s latest MHEV technology, the A5 Cabriolet can coast between 55 and 160km/h totally on power generated by the lithium-ion battery. The system also enhances the stop-start operation, with the BAS kicking in immediately after a stop to start the engine quickly, quietly and smoothly. According to Audi, MHEV can reduce fuel consumption by up to 0.3 litres per 100 kilometres.

The Audi A5 Cabriolet offers drivers state-of-the-art connectivity and infotainment with the new MMI touch system. Audi has done away with the rotary pushbutton and instead offers a 10.1-inch touchscreen with acoustic feedback. Using free text inputs, the system is intuitively easy to use, and the natural-language voice control can identify everyday speech. The most advanced MMI navigation plus the infotainment control centre is standard on all Singapore cars.

This MMI infotainment system complements the 12.3-inch display of the virtual cockpit. The controls on the multi-function steering wheel allow three different views on the display, allowing drivers to toggle from one to another without lifting a hand. 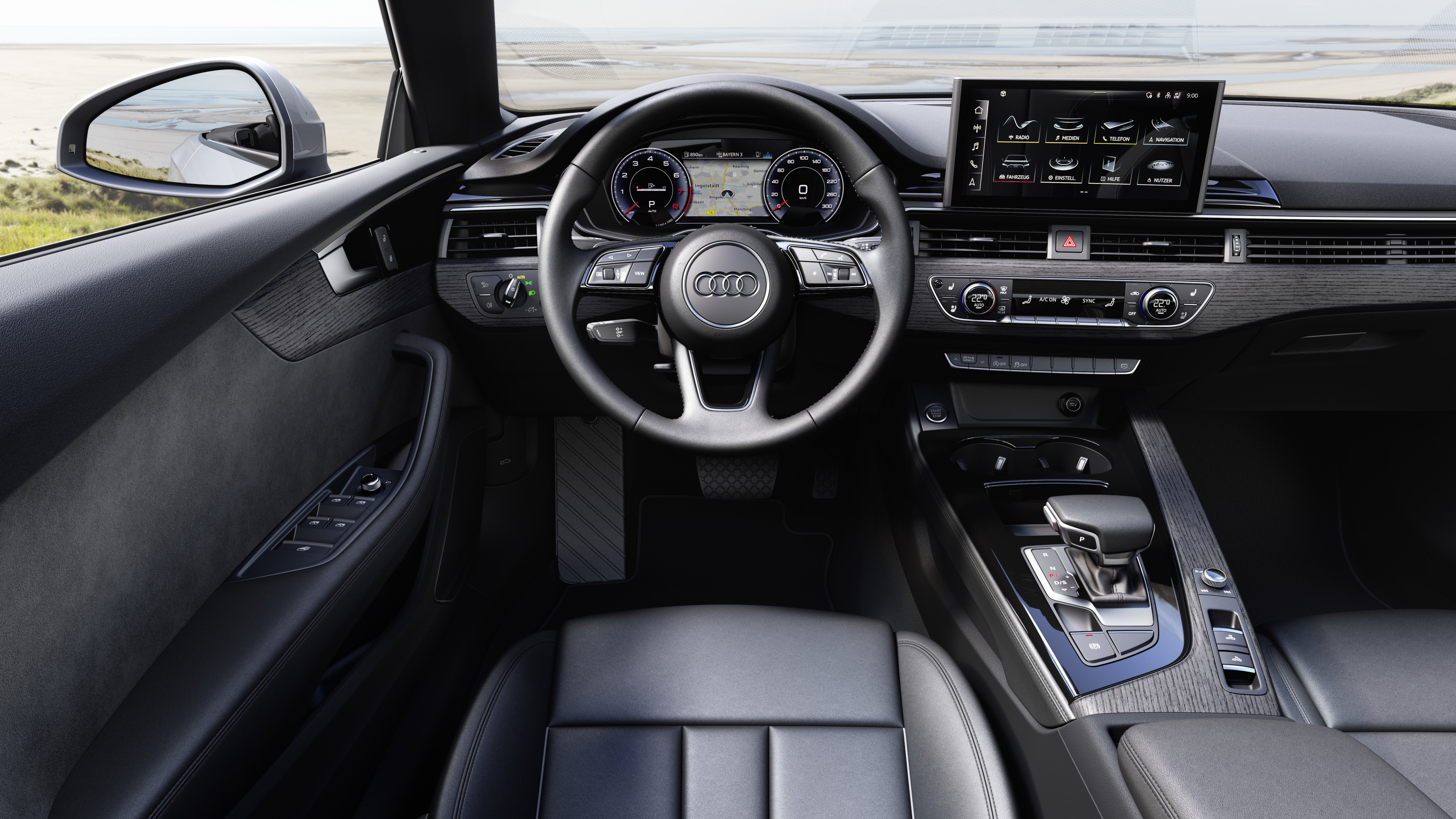 Audi continues to push the envelope on connectivity, and the myAudi app is surely one feature that will gain traction with the tech-savvy crowd. With this app on a smartphone, drivers can access their car’s functions at any time, as well as set seven different user profiles and preferences. If anything, this space-age technological feature juxtaposes expediently with the ageless joy of driving with the top down. 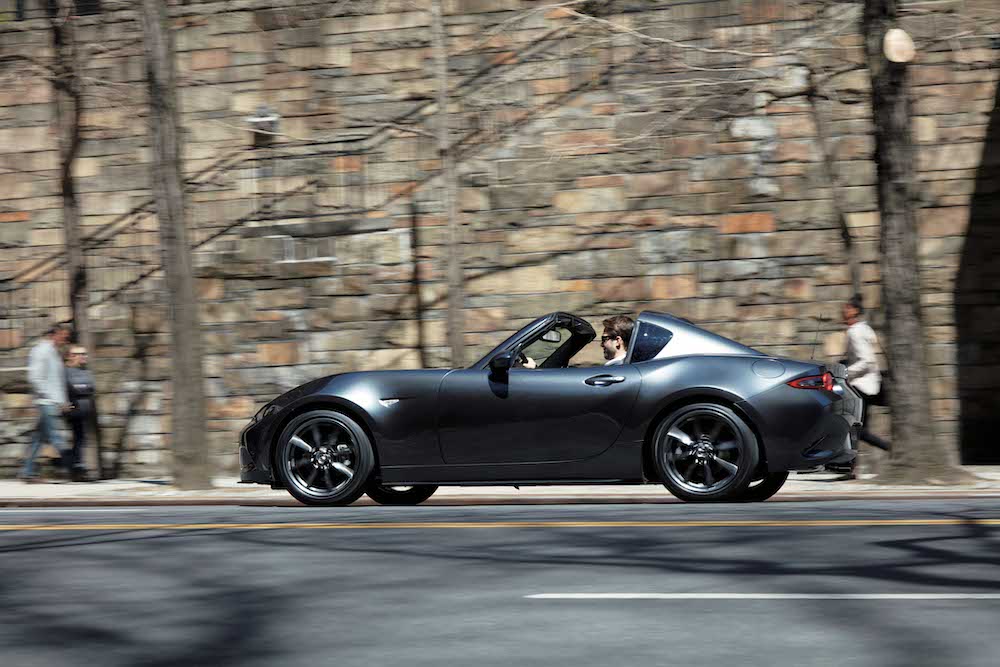 More than three decades have passed since Mazda thrilled the world with the Miata. That little open-top zipper is now synonymous with a fun drive in a neat package that walks that the fine line between those looking for a pleasant weekend drive and those looking for a vehicle that packs a decent punch.

In 2016, Mazda rekindled some of this sporty heritage by re-introducing the car, albeit with modern-day trimmings. The Mazda MX-5 RF was born at the New York International Auto Show (NYIAS), and duly won both the 2016 World Car of the Year and 2016 World Car Design of the Year Award at the event. It was the first time any car has won both titles at the NYIAS.

Today, Mazda imbues its models with a design-and-build philosophy that oversees all its cars. In that respect, the MX-5 RF was conceptualised and produced using Mazda’s KODO Design, i-Activesense Safety Technologies, SkyActiv Technology, and its overarching ‘jinba-ittai’ philosophy. Through it all, every effort was made to retain the freedom and fun associated with the original model.

One of the main features of the MX-5 RF is, naturally, the retractable roof. Mazda’s modern take on the traditional soft top is a hardtop made up of front, middle and rear sections, and the rear window glass pane. With the press of a switch on the front console, the front and middle aluminium sections fold into the boot lid of the car. This can be done when moving at speeds up to 10km/h, and is reflected in an animation in the multi-information display in the meter cluster.

Even though the car has a short overhang rear, there is sufficient space in the boot for two standard hard-case carry-on bags, and also features a multi-purpose toolbox. 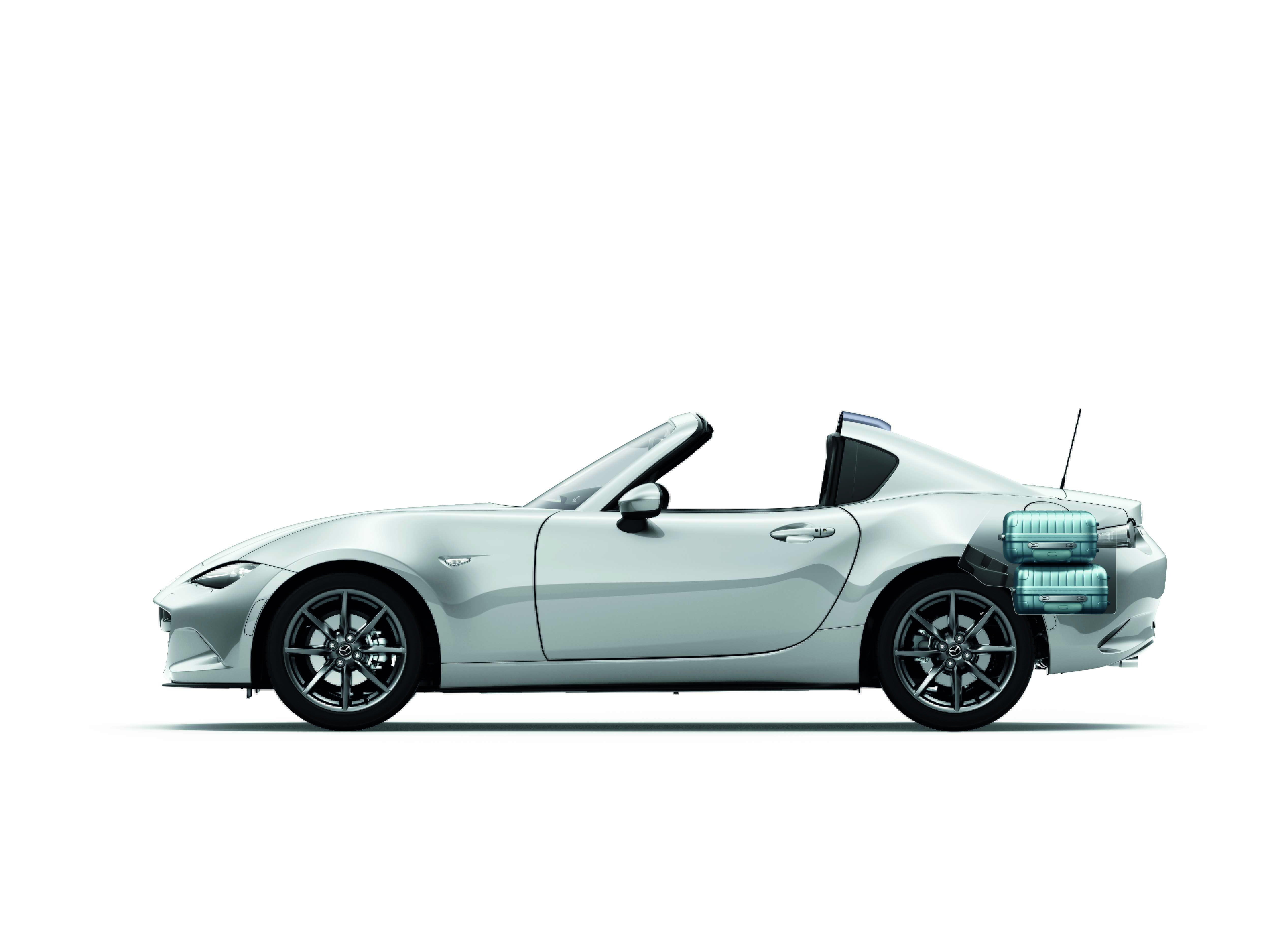 Mazda’s ‘jinba-ittai’ is the foundation of the MX-5 RF driving experience. The original configuration of a rear-wheel-drive two-seater with a front mid-ship engine and 50:50 front/rear weight distribution offered a classic sports car layout that is thrilling to drive and completely balanced. In this fourth-generation model, the engine is now moved rearward, and the centre of gravity lowered for more stability and better handling. Driver position is also moved towards the car’s centre line for better comfort and driving position. With SkyActiv Technology, the lightweight construction of the MX-5 RF is holistically partnered with the suspension and powertrain to optimise the driving experience. 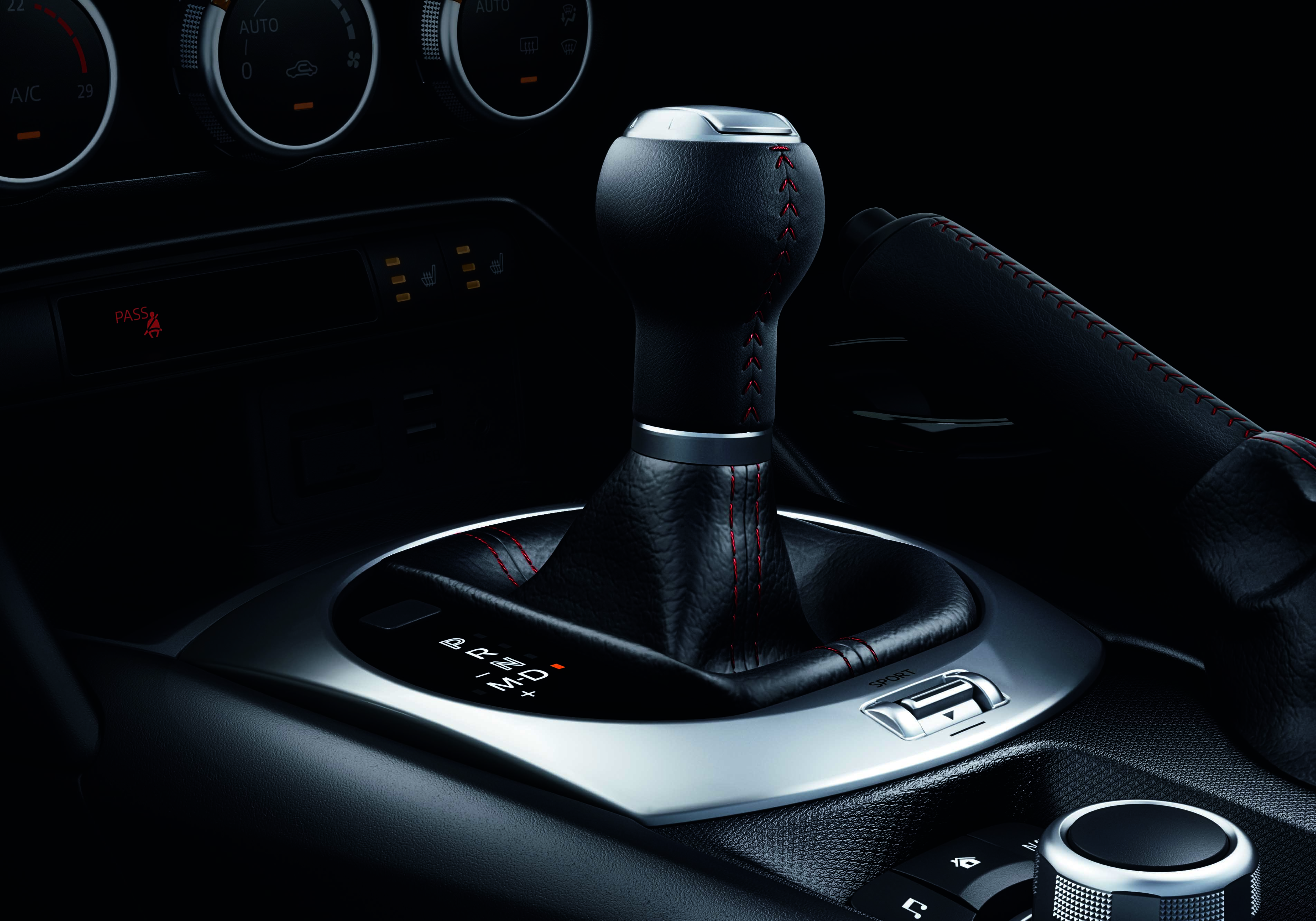 Safety features in the car are also considerable. Mazda’s i-ACTIVSENSE suite of features include Blind Spot Monitoring and Cross Traffic Alert using quasi-milliwave radar sensors to detect vehicles behind and to the side, as well as Lane Departure Warning. The Advanced Smart City Brake Support and Smart City Brake Support (Reverse) detect oncoming vehicles and apply the brakes automatically to prevent or mitigate collisions.

Mazda put great thought into designing the cockpit. Human-Machine Interface (HMI) directed design from the ground up, allowing for a display of information without detracting the driver from attention on the road. MZD Connect allows for in-vehicle connectivity with smartphones, with information for the system’s audio viewable from the seven-inch centre display. If that wasn’t enough, the Mazda MX-5 RF also allows for Apple CarPlay and Android Auto so that you never miss a beat when enjoying the hallmark pleasures of taking this car on the road. 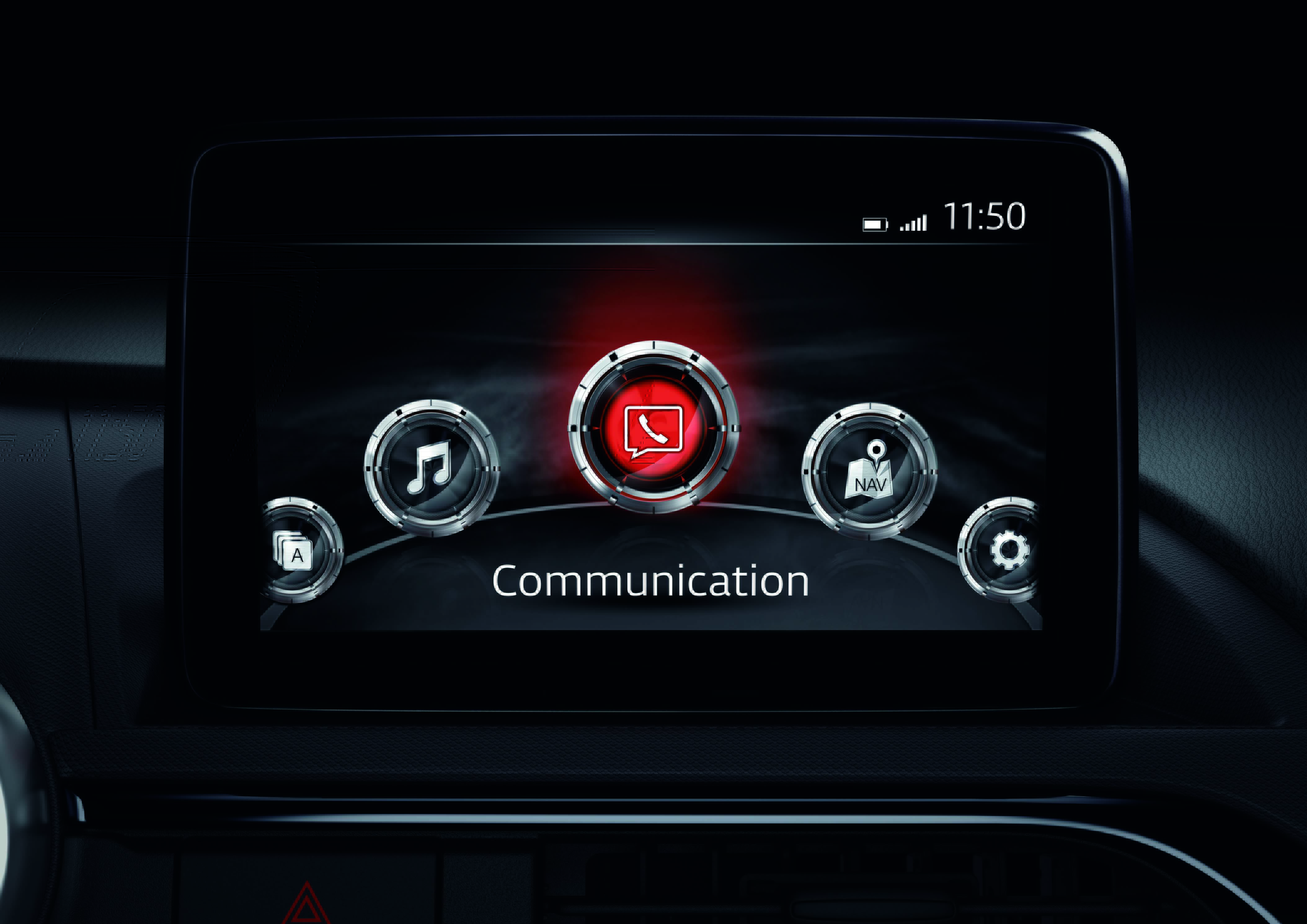 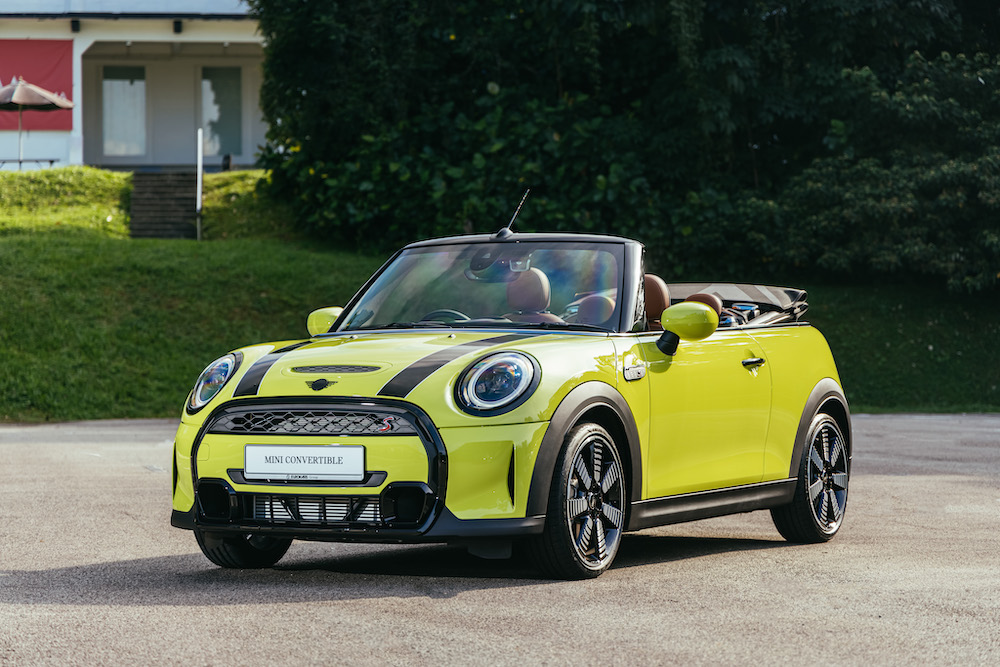 In June this year, MINI announced the introduction of new versions of four of its models. The MINI Convertible was one of them.

While mostly a facelift exercise, the new elements are considerable. And together with the mark changes in both exterior and interiors, driver assistance systems, operation and connectivity all got a boost with new technologies.

Enthusiasts will notice that the new MINI Convertible sports a more dominant radiator grille, with an enlarged hexagonal surround. A black inner housing now accentuates the hallmark round LED headlights. Side indicators, integrated into the redesigned side scuttles, now feature LED technology as well.

The textile soft top is fully electrically controlled, and offers great sound insulation. It takes just 18 seconds to open or close, and can be activated at speeds of up to 30km/h. The top can be retracted partially up to 40cm so that the car offers a ‘sunroof’ function that can be obtained at any speed. In addition to the black version, a MINI Yours soft top with a woven-in Union Jack pattern in titanium grey is also available. 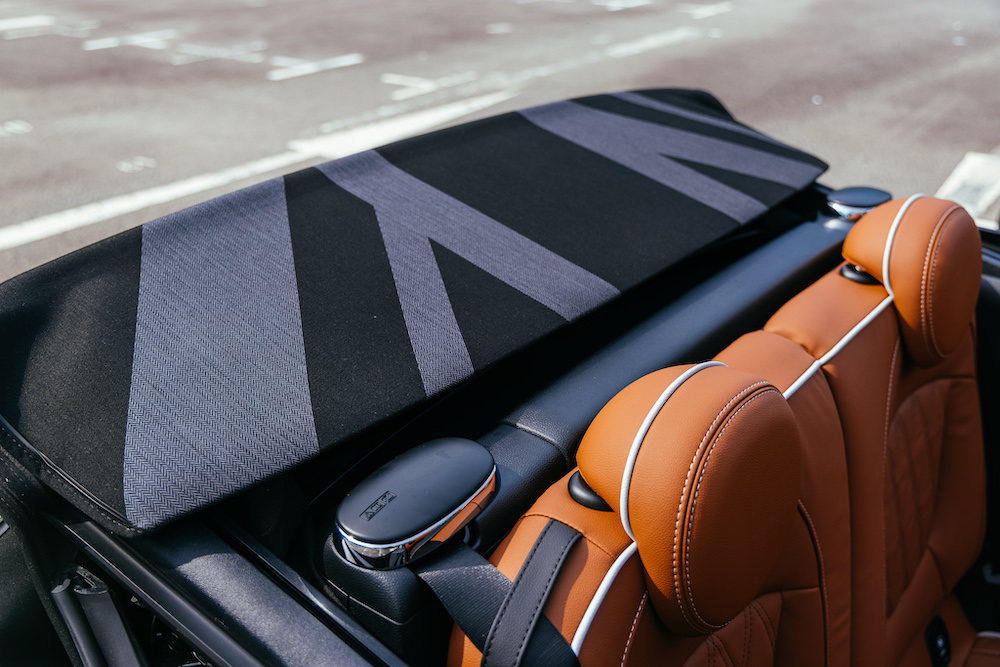 New paint finishes are available in the new MINIs. Rooftop Grey, Island Blue metallic, and Zesty Yellow all serve to add more colour to the array. There are now five new wheel options to choose from as well.

Some of the most significant changes are found in the interior of the MINI Convertible. Elements from the Colour Line, previously selectable as an option, is now standardised to match the respective seat upholstery colour. The use of chrome has been reduced, and internal air vents surrounding the central infotainment system have been redesigned to sit flush with the interior surface. 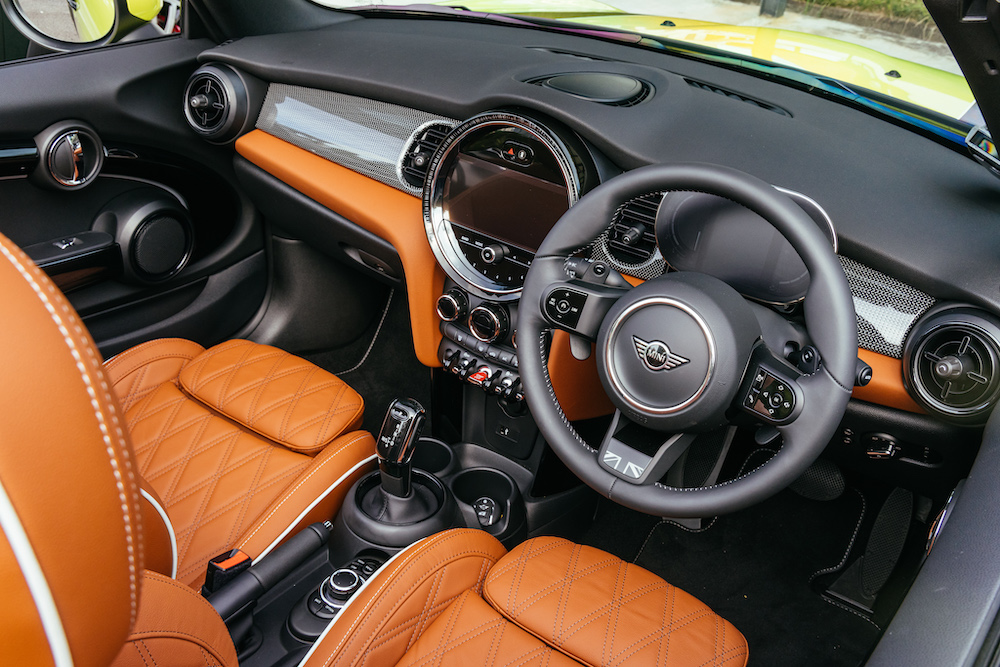 The optimised infotainment system now offers as standard aspects such as touchscreen display, touch-sensitive favourite buttons, and Piano Black high-gloss surfaces. The operating system of the MINI Convertible is more advanced than ever, with increased options for vehicle functions, audio, navigation, hands-free telephone function, and apps. And, for the first time, Connected Navigation is available across all variants, and includes Real Time Traffic Information, which will help find the best possible route to your destination. If that’s not enough, then the wireless Apple CarPlay is also available. Drivers can also charge their smartphone wirelessly, too.

The MINI TwinPower Turbo technology continues to be the workhorse under the hood of the MINI Convertible. The turbocharging unit is incorporated into the exhaust manifold, direct petrol injection, and variable valve timing. Optimised emissions control technology help to make the car comply with the strict Euro 6d emission standard. 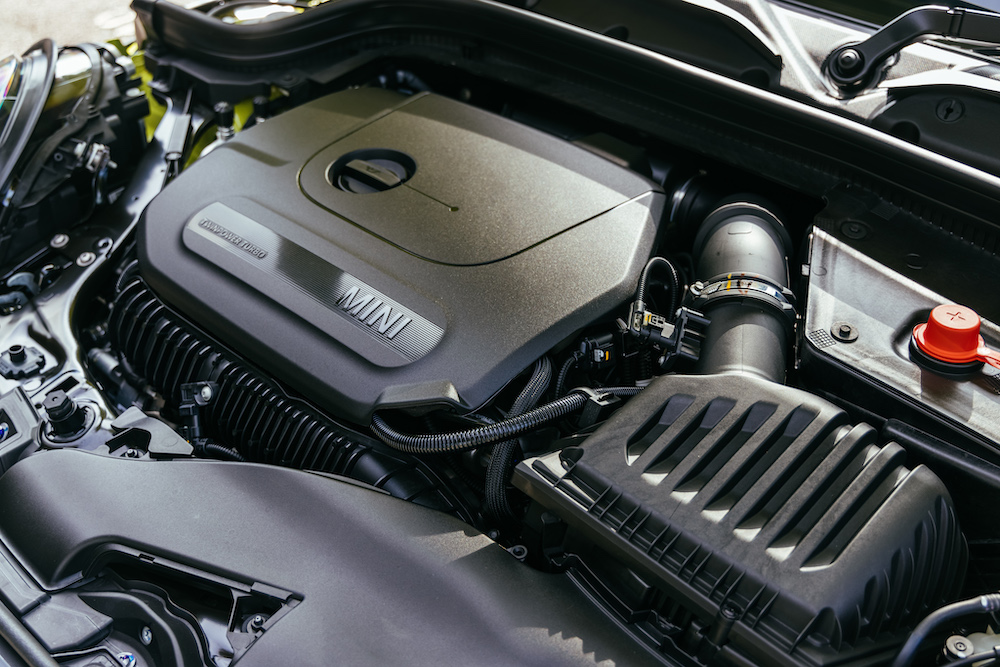 One of the key highlights of the new MINI Convertible is the availability of the Driving Assistant package as standard. The available features include a camera-based safety system that recognises and reports speed limits, collision warning and pedestrian warning systems with city braking functions, cruise control with braking function, and Park Distance Control using sensors at the rear and the rear-view camera.

Lane Departure warning is operational when the car is travelling between 70 and 210km/h, and distance control helps keep a safe distance from the car in front. One premium feature newly introduced is the Parking Assistant, which uses a camera-based system to locate parking spaces and help the driver steer into challenging lots.

Perhaps the most poignant enhancement to the new MINI Convertible is the introduction of the new MINI App. Downloadable onto a smartphone from the Google Play Store or Apple App Store, the app lets your smartphone call up information of the car’s status anywhere, anytime — just one more clever and useful upgrade to help MINI hurtle into the future of motoring.