Car Licence Plates: The Inside Scoop

Uncovering the meaning behind the different types of licence plates and numbers in Singapore. 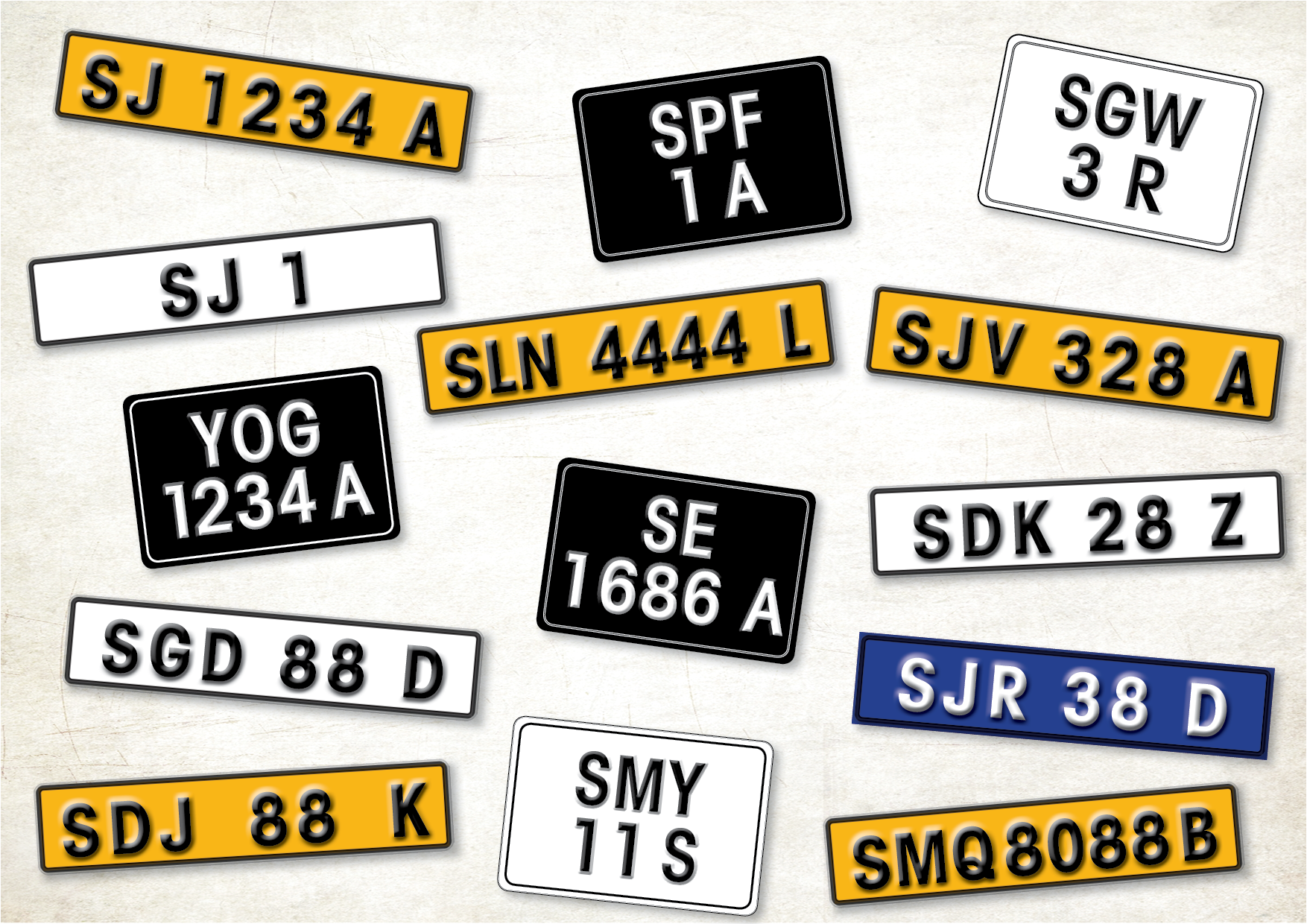 There’s one thing that makes our cars unique — and that’s the licence plate number. Just like our NRIC number, each registered car will be given a specified number plate. For a small country like ours, we sure do have a startlingly wide range of plate types. Some of you may wonder what each of these plate types means.

Licence plates have a variety of prefixes and suffixes. The very first prefix, introduced way back in 1906, existed as a single letter ‘S’, which, back in the day, stood for ‘Singapore’. This was followed by a suffix that ranged from ‘B’ to ‘Y’; the letter ‘A’ was reserved for motorcycles until the mid-1980s.

As more cars were introduced, the ‘S’ was accompanied by another prefix, which ranged from ‘B’ to ‘Y’. Following that was the era of the ‘E’ prefix, which started in 1972, a little too early for younger drivers to remember. The current and more recognisable system of three-letter prefixes of the ‘S’ series had its beginnings in 1984.

MAKING IT OFFICIAL
While private cars take up the majority of licence plates here, there are a few combinations that are specially reserved for state use. The official state car for the President sports a ‘SEP’ plate, which is an abbreviation for ‘Singapore Elected President’. ‘SJ’ prefixed cars are reserved for Supreme Court judges, with ‘SJ1’ assigned to the Chief Justice. The Commissioner of Police is assigned a ‘SPF1’ number plate.

An interesting and wise decision by the Land Transport Authority (LTA) to skip vowels for the middle prefix letter meant that we’ve never seen controversial three-letter words on car licence plates! Back in 2003, LTA decided to skip the ‘SE’ series after ‘SDZ’ ended, and went ahead with ‘SF’ instead. Likewise, ‘SI’ was skipped; in future, so will ‘SO’ and ‘SU’.

For business-related vehicles there are a few specific prefixes that define their business type. ‘Q’ was used for company-registered vehicles up until 1998 for business tax purposes, but since then they have been issued standard plates. Private bus operators all sport the ‘P’ series, while taxis and street hire vehicles, like sightseeing buses, all have the ‘SH’ series. Goods vehicles, if classified as heavy, have ‘Y’ as a prefix; if classified very heavy, they get an ‘X’.

EXTRA SPECIAL
LTA also issues temporary plates for special events — these have special letters linked to the event. The ASEAN Summit in 2018 had ‘ASN’-plated vehicles ferrying delegates to and from summit venues. The 2010 Summer Youth Olympics used ‘YOG’ plates, while official Singapore Airshow vehicles had plates that spelt out ‘AIRSHOW’!

Another way LTA categorises vehicles is by colour. Most of us are aware of the colour plates of private and off-peak cars, but there are plates in other colours that are seldom seen.

Research and Development vehicles with ‘RD’ plates have a top yellow and bottom blue diagonally coloured background. Restricted Use vehicles with ‘R’ prefixes have a top red and bottom green diagonally coloured background. If you have a vintage or classic car, you would have a plate that has two horizontal strips, red on top and yellow at the bottom.

As Singapore rethinks the transport infrastructure to include electric vehicles — from cars and buses to bicycles — we may yet see the vehicle licensing system and design undergo more changes to add to the interesting history of the humble licence plate.