Signed up for an AUTOVENTURE™ holiday in Vietnam? Here’s a suggested list of must-try dishes when you drive through the various cities on this tour. 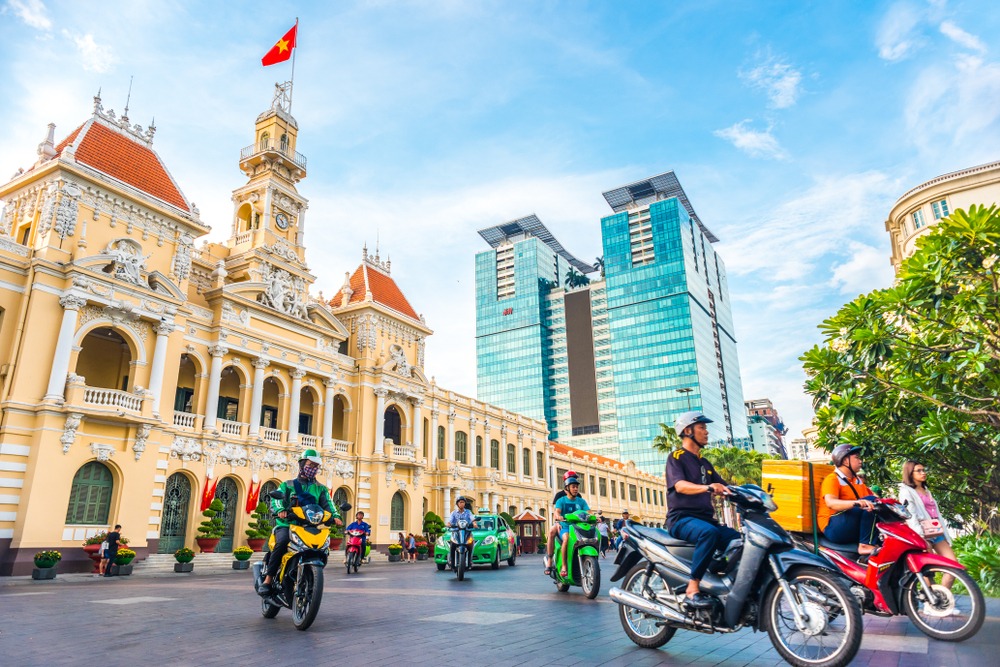 A former French enclave, Ho Chi Minh City still retains much of its colonial past. Its busy streets, teeming with loud hordes of motorcycles, are lined with elegant buildings boasting French architecture. These stand alongside modern skyscrapers, ornate temples, and traditional pagodas.

A tour around the bustling city centre brings you to architectural highlights, such as the red-brick Cathedral Church, with its two bell towers that are still rung to this day. There’s also the iconic yellow Post Office, which features elements of Gothic, Renaissance and French colonial design. Fully operational, it still houses vintage postal paraphernalia, from paintings to old glue pots!

The city is also renowned for its many rooftop bars, where you can watch the world go while nursing a pint of Bia Hoi (a Vietnamese specialty draft beer). And then there’s its cuisine. While there are numerous high-end restaurants offering meals that are fusions of French, Chinese and Vietnamese cuisines, to really get to the heart and soul of Saigon (the old name for the city), you’ve got to eat like the locals. 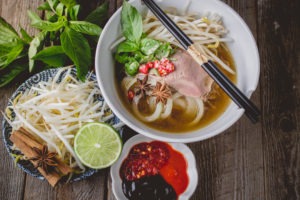 No trip to Ho Chi Minh City is complete without a steaming bowl of pho. The ubiquitous dish can be found virtually everywhere, and is often what the locals tuck into to start their day. Rice noodles, flash-boiled until soft, are served in a hearty broth, topped with either bo(beef) or ga(chicken). Each order comes with a generous plate of fresh herbs, such sawtooth herb, mint, Vietnamese coriander as well as pickled garlic and an often-excellent house-made chilli sauce. 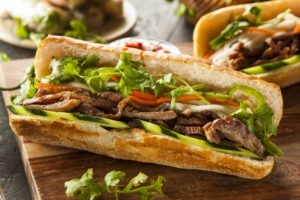 Apart from architectural style, the French also left an indelible influence on Vietnamese cuisine. Banh mi is the Vietnamese spin on the humble French baguette. And you’ll find a cart (usually more!) hawking these little crusty bites at just about every street corner. Sliced in half, the baguette is smeared with mayonnaise, then stuffed with pork, luncheon meat, cured pork skin and pâté. To add a fresh counterbalance to the meats, Vietnamese radish, pickled carrot, sliced cucumbers, and sprigs of coriander are added, before the whole thing is smothered with chilli sauce. It’s a veritable party in the mouth — and usually costs less than $3! 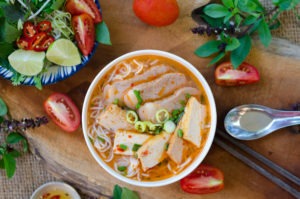 Another popular noodle dish you’ll find in Ho Chi Minh is Bun Rieu. The tangy noodle dish is made from a crab-based stock with tomatoes and rice vinegar thrown in for a tart, well-rounded finish. The noodles, like rice-flour versions of our yellow mee, are topped with a rich crab paste, fried tofu, meatballs, pork chunks, and cubes of congealed pig’s blood. Before tucking in, add a dollop of shrimp or crab paste, chilli sauce, lime juice, and pile on a mountain of fresh herbs and shredded vegetables. 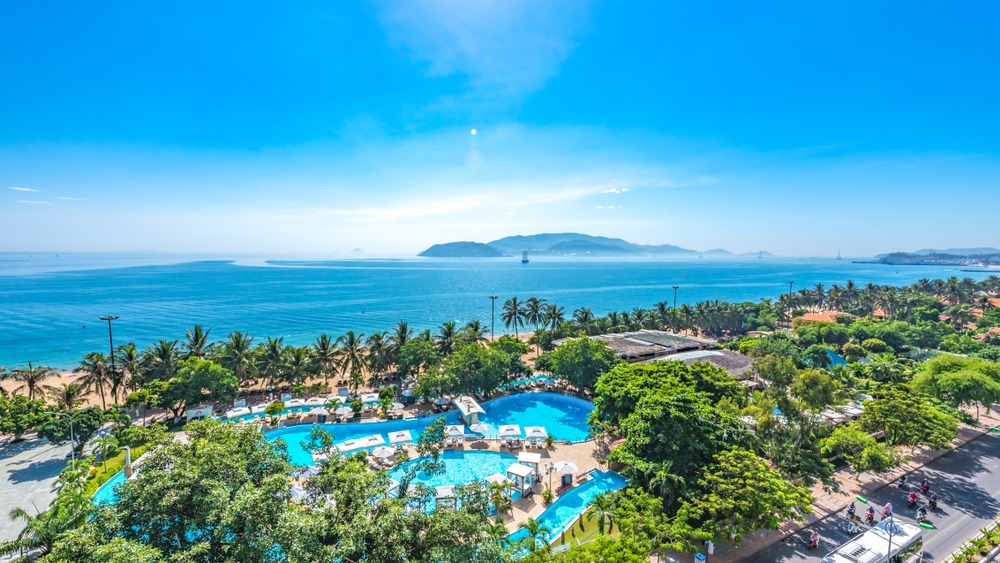 Nha Trang, a coastal resort city in southern Vietnam, is a perfect combination of both urban and coastal living, with high-rise buildings, trendy restaurants, and chic boutiques right next to beautiful white-sand beaches and turquoise waters.

When the sun sets, Nha Trang turns into party central, with its vibrant nightlife scene coming to life in rooftop lounges, nightclubs, and beachfront dance floors. If that’s not your thing, there are 19 islands nearby to choose from to get your chill on — whether it’s snorkelling in stunning protected marine areas or getting a mud bath, a quintessential Nha Trang experience.

And then, there’s hai sanor ‘seafood’. Nha Trang offers some of the best and freshest seafood, with delicacies such as giant prawns, pan-fried squid, grilled red snapper, and crab. If you have a more adventurous palate, try these local delights instead. 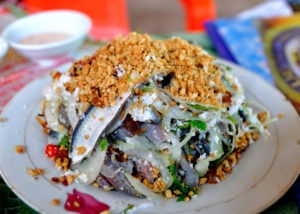 Otherwise known as deep herring salad, this labour-intensive dish looks deceptively simple. It is made with only the freshest deep herring, which is painstakingly deboned and cured with lime water, tamarind, and sour star fruit. Ground roasted soybeans, onions, garlic, coriander, and perilla are then tossed in. However, what makes or breaks the dish is the dipping sauce, which is made from fishbone broth 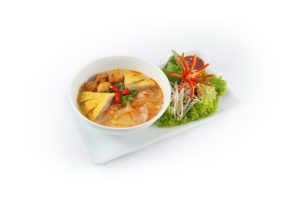 The star of this noodle dish is what the Vietnamese call the foot jellyfish, a thumb-sized variety with a milky white colour that’s believed to be able to cure diseases such as cough and lung inflammation. The jellyfish is thoroughly cleaned, then cut into small slices, parboiled to retain its crunchy texture, and served with rice vermicelli in a light broth topped with grilled fish and raw vegetables, chilli and lime. 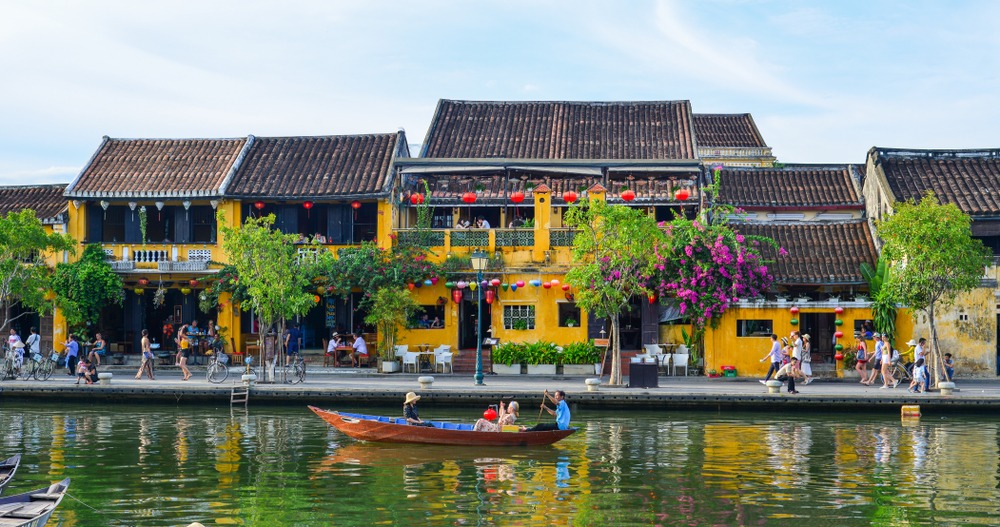 A quaint little UNESCO-listed coastal town, this former port city features an eclectic architectural mix of bygone eras with wooden Chinese shophouses and Buddhist temples, mustard yellow French colonial buildings, ornate Vietnamese tube houses and the iconic Japanese Covered Bridge, all charmingly cocooned in a time capsule. Famed for its immaculately preserved Ancient Town, Hoi An brings old world charm to a whole new level. There are no cars, no high-rises, and the inhabitants are decidedly laidback. Even the cuisine harkens back to an older period. 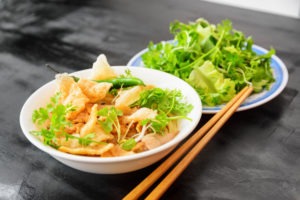 This speciality noodle dish has been a Hoi An mainstay since the 17th century. The hand-cut rice noodles are a brownish hue and impart an unusual flavour, which it gets from being mixed with lye water. Tossed with sliced pork, crisp rice crackers, spices and a bounty of fresh herbs, it’s a slice of history in a bowl. 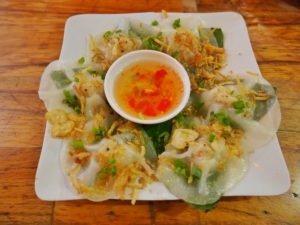 White Rose Dumplings, so called because they resemble little white roses, is a dish invented by White Rose Restaurant, a Hoi An institution. Each dumpling is made with translucent white dough and water drawn from the Ba Le well. Similar to dim sum staple har gowbut with a firmer consistency, the doughy parcels are filled with spiced minced shrimp or pork, sprinkled with crispy fried shallots, and served with a special dipping sauce made with shrimp broth, chillies, lemon, and sugar. 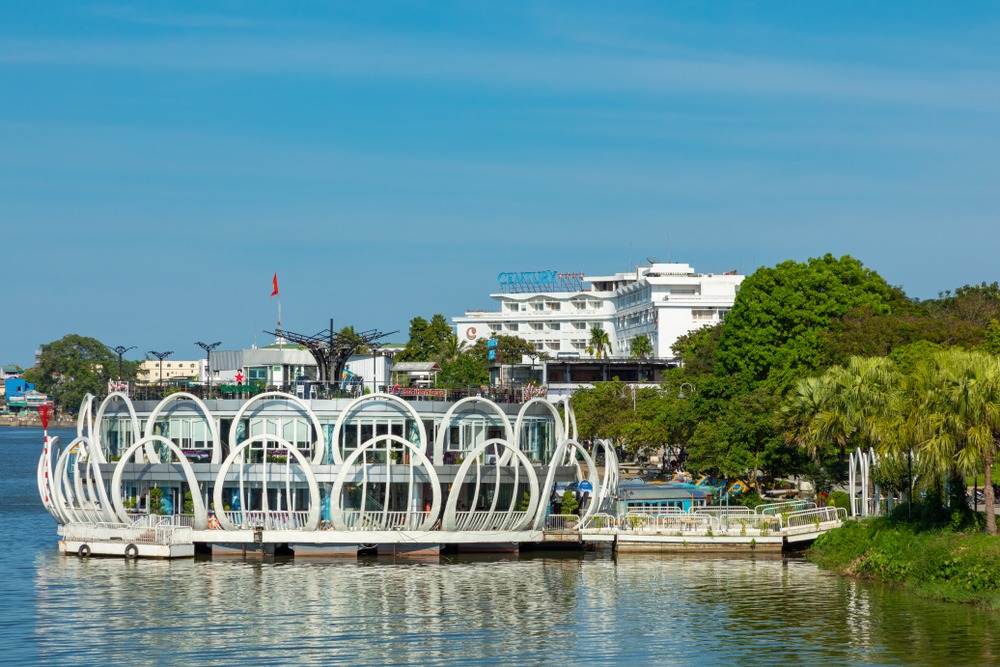 Located on the banks of the Perfume River, the charming riverside town of Hue is a living museum dotted with beautifully preserved ancient architecture and ancient tombs of former emperors. One of the most important royal cities in Vietnam — it is still known as the Imperial City — it is the birthplace of famed Imperial Banquets. It is no surprise then that Hue is often said to have some of the best food in all of Vietnam. 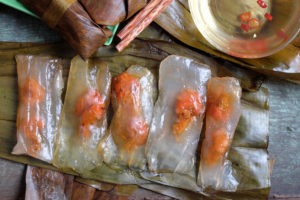 This tapioca flour dumpling is a savoury snack commonly found around Hue. Stuffed with caramelised shrimp and pork, the dumpling is tied in banana leaves and steamed. To enjoy, unwrap the parcel and drench it with nuoc mam pha, a fiery dip made with fish sauce, vinegar, shrimp stock, sugar, water and fresh chillies. 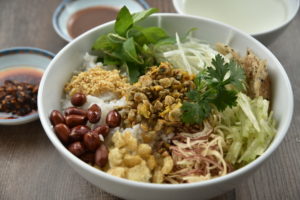 A dish with complementing flavours and contrasting textures, clam rice is one of the most famous dishes in Hue. A multi-sensory treat, crunchy rice is served cold with tender stir-fried clams, crisp pork cracklings, roasted peanuts, banana blossom strips, taro stems, fermented shrimp sauce as well as a bowl of hot clam broth. 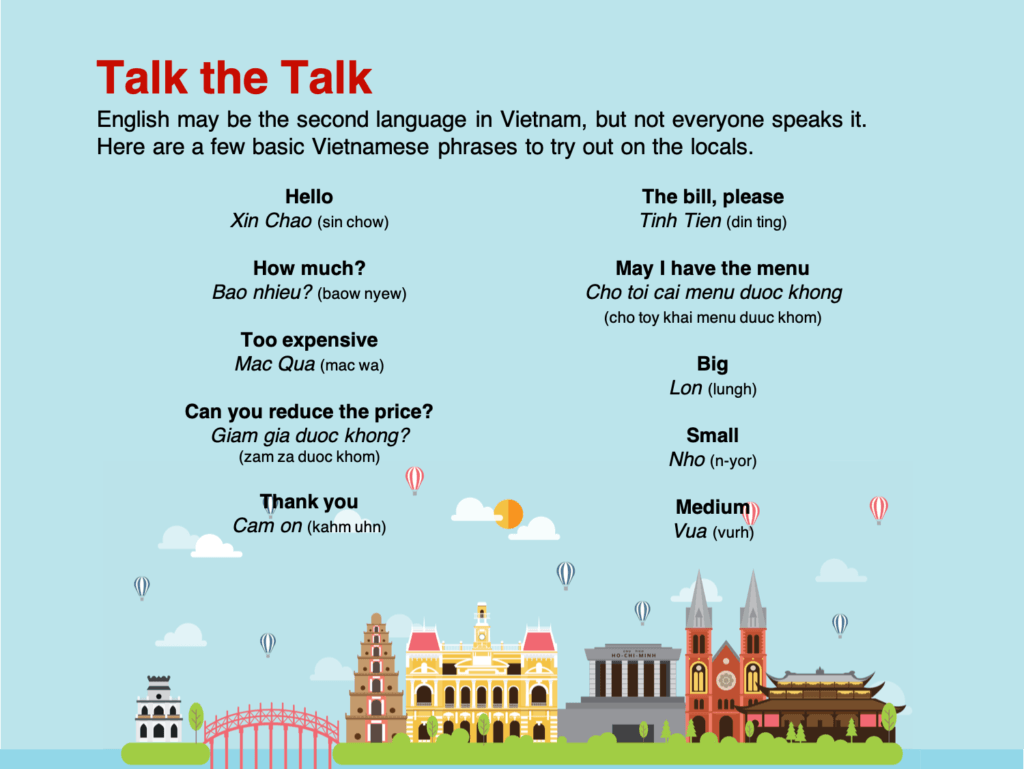 There is still time to sign up for the AUTOVENTURETM 20D19N Fly-Drive Cambodia & Vietnam (8–27 September 2019) — registration closes on 8 August 2019. Check out the itinerary and register here.