Finding cars under $130,000 in Singapore isn’t easy these days, what with the COE closing in on six figures! But you can consider these three four-door models without breaking the bank. 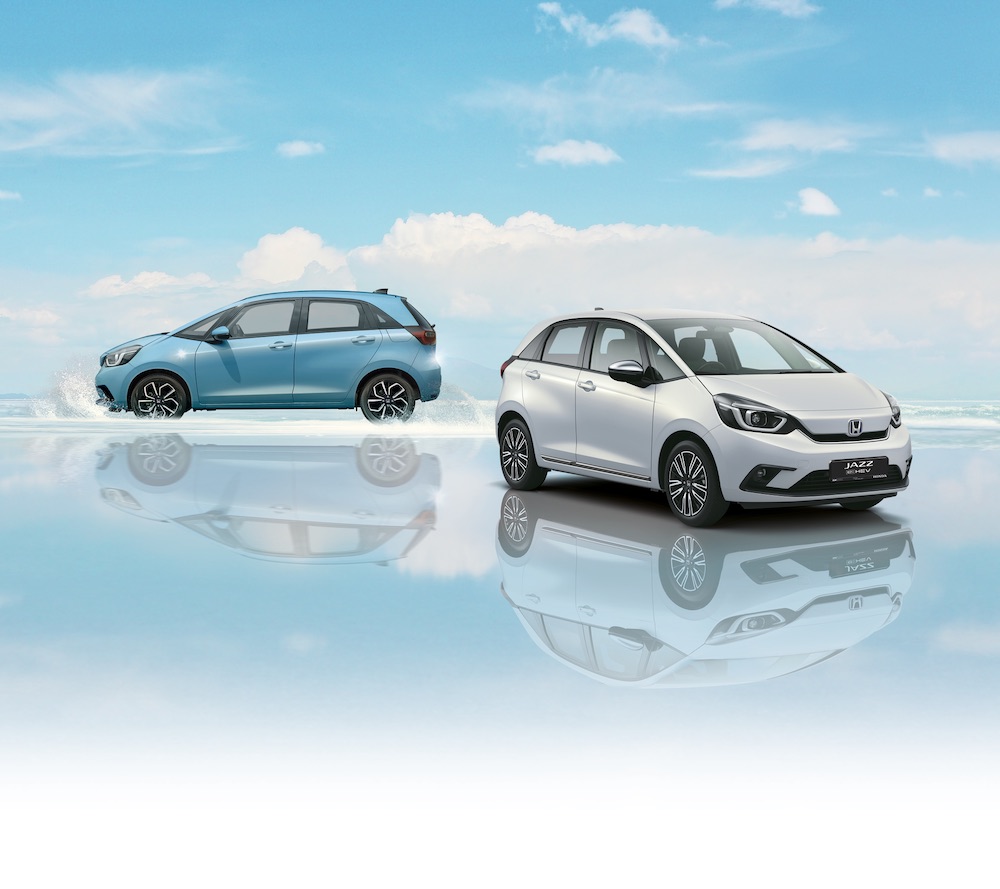 The Jazz has been a favourite of drivers looking for a small car that also is also practical for families. With the COE at astronomical levels lately, this zippy model from Honda is probably getting plenty of second looks from prospective buyers.

The styling of the Honda Jazz has been increasingly modernised over the years. The current iteration is a smart and stylish rendition of classic Japanese design that combines modernity with sensibility. LED Headlights with Daytime Running Lights are an upgrade, and the standard fog lamps enclosed in angled grilles add to a sporty façade. Electrically retractable side door mirrors with Integrated LED Side Turn Indicators offer increased safety, and is a feature found mostly in higher-end cars. You also can’t help but notice the new 16-inch alloy wheels with their bold design. 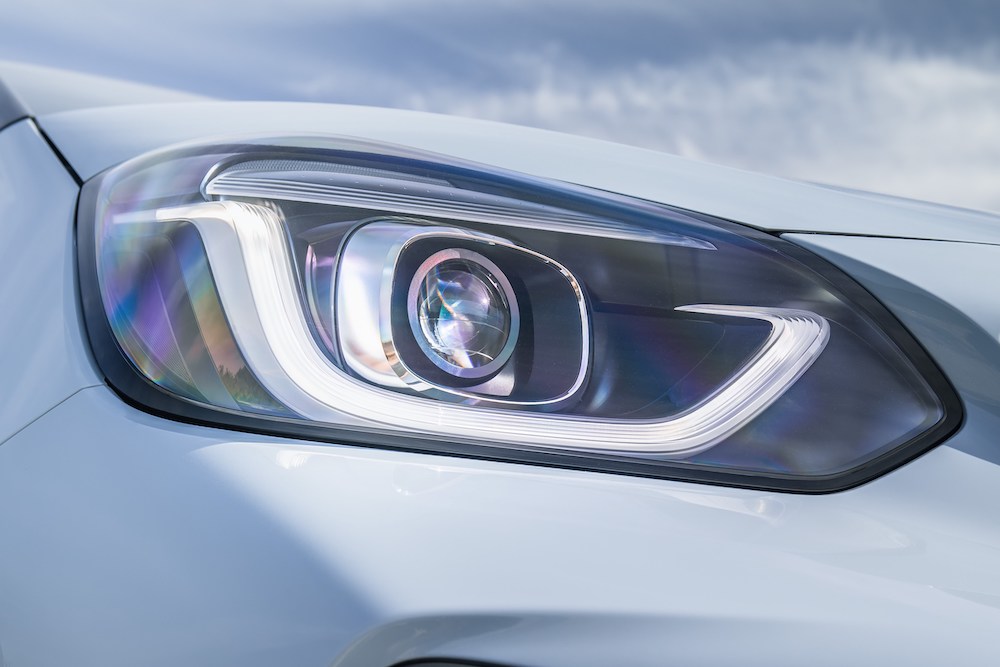 The interiors possess elements that are altogether clever and functional for drivers and passengers. The smartphone pocket at the back of the seats are nifty inclusions. For added comfort, the front seats are specially padded to reduce fatigue. Space within the cabin can also be configured for a variety of uses.

The new DOHC i-VTEC engine in the Honda Jazz is typical from the Japanese manufacturer, combining fuel efficiency with a punchy ride. For a more conservative stance, switch to ECON Mode, which will increase fuel efficiency. The car even comes with cruise control for easy highway driving.

Safety features include an Anti-Lock Braking System, as well as Emergency Stop Signal that turns on the brake and hazard lights in an emergency stop. The multi-angle rear view camera completes the package with wide-angle views on the car’s navigation screen.

Despite being Honda’s entry-level car, the Honda Jazz offers some nice touches when it comes to technology. The nine-inch infotainment display is touchscreen-enabled in a smartphone-style usability, and Android Auto and Apple CarPlay are also included. The Bluetooth Handsfree Telephone System lets you make and receive calls safely, while the Walk Away Auto Lock gives you peace of mind whenever you leave the car. 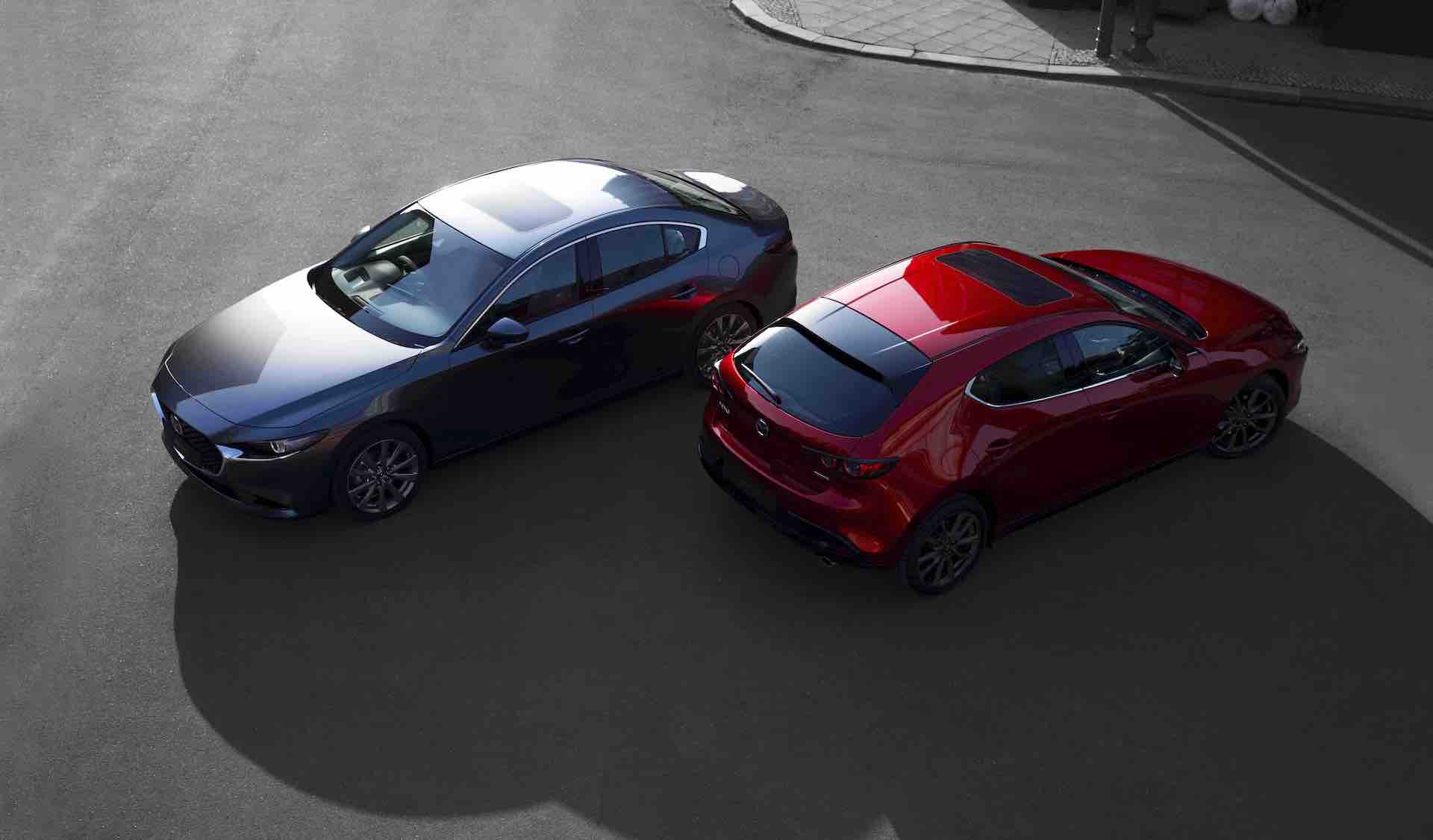 The Mazda 3 sedan has been around for the last three years, but it still turns heads as one of the smartest looking compact sedans on the roads. Much of this success is due to Mazda’s concerted effort in its holistic approach to design and functionality.

The Japanese carmaker prides itself in upholding the concept of ‘human-machine interface’, where the design of its cars are entirely human-centric, seriously taking the person into account. No stone is left unturned.

One example of this is the pedal layout, and how it influences the driving position. Unlike conventional pedal layouts, which is slightly misaligned to our leg position, Mazda 3’s pedals are positioned such that the leg extends comfortably and naturally. Another example is the Active Driving Display, which sits on the windscreen on the driver side just below the driver’s line of sight. Information is delivered in real time here, while essential driving information is shown in the meter cluster LCD on the dashboard. 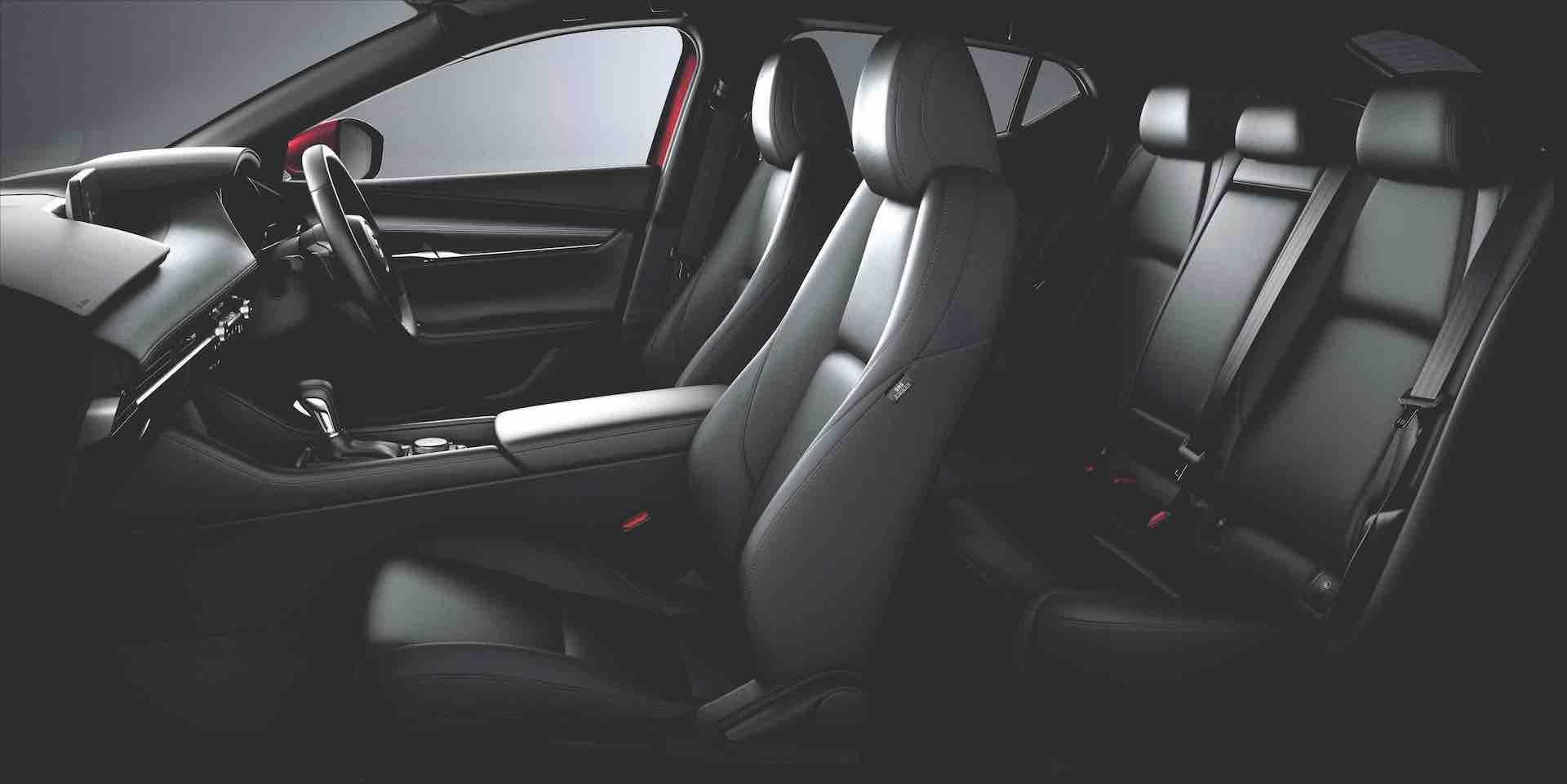 From a features-per-dollar perspective, there is little to refute that the Mazda 3 is arguably one of the best deals in town. 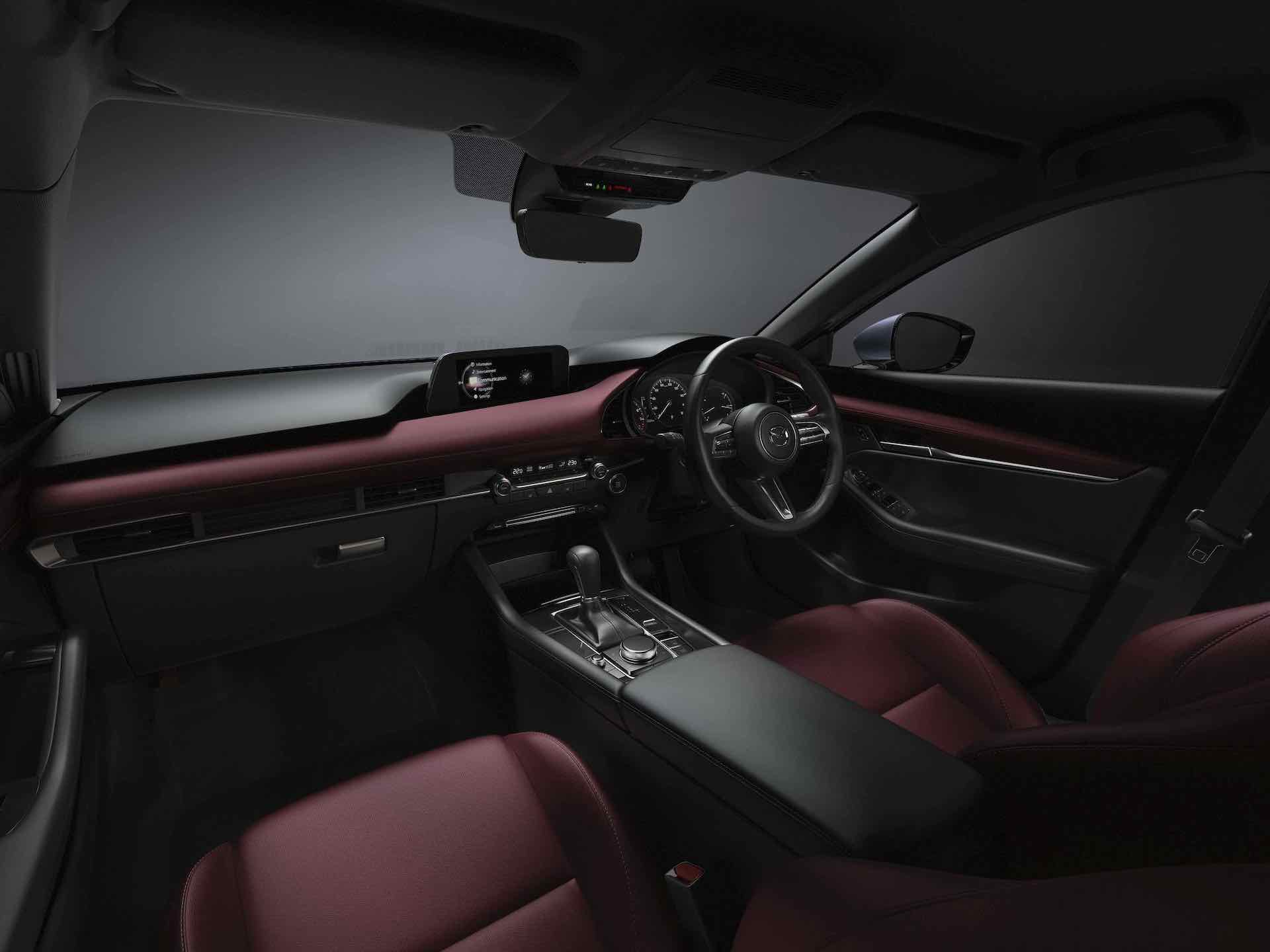 One of the best things about the Mazda 3 is under its hood. Mazda proclaims that the Skyactiv-G, high-efficiency engine is able to compress air-fuel mixture to a higher degree than conventional engines, thus reducing wasted energy from the combustion process. The M-Hybrid system further recovers energy from breaking to power the onboard electrical systems. Using an integrated starter generator (ISG) to convert it into electric power, the system also stores that power in a lithium-ion battery. It then uses a DC-DC converter to convert that power to the appropriate voltage and supplies it to the car’s electrical equipment. Adopting the belt-driven ISG allows the system to provide drive assist and help the engine restart more quietly after shutting down for idling stop. In addition, the lithium-ion battery is mounted between the wheels such that it maximises interior space while optimising weight distribution and contributing to collision safety. 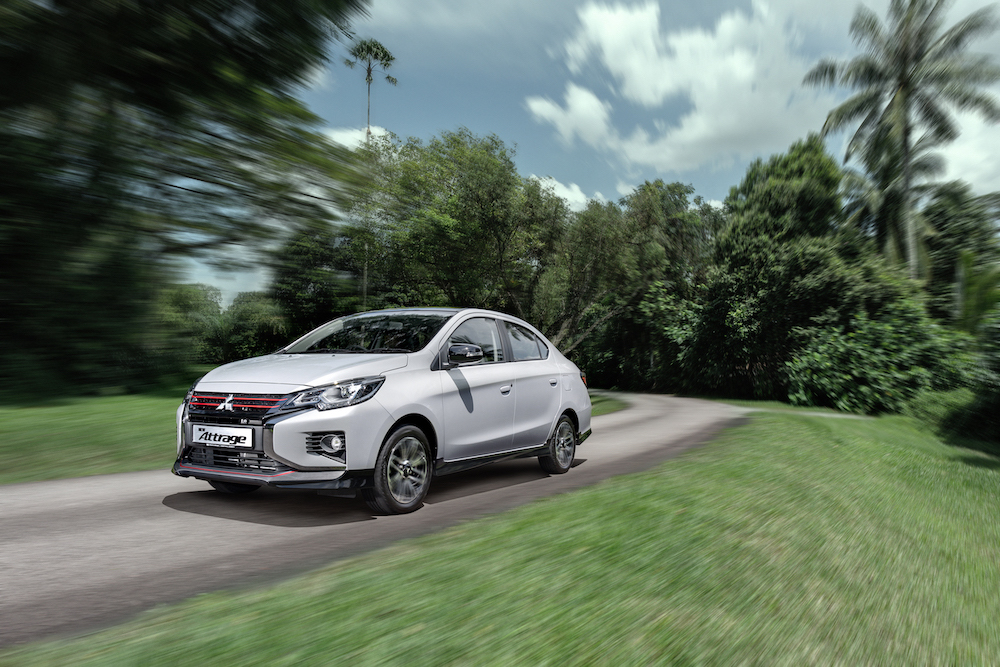 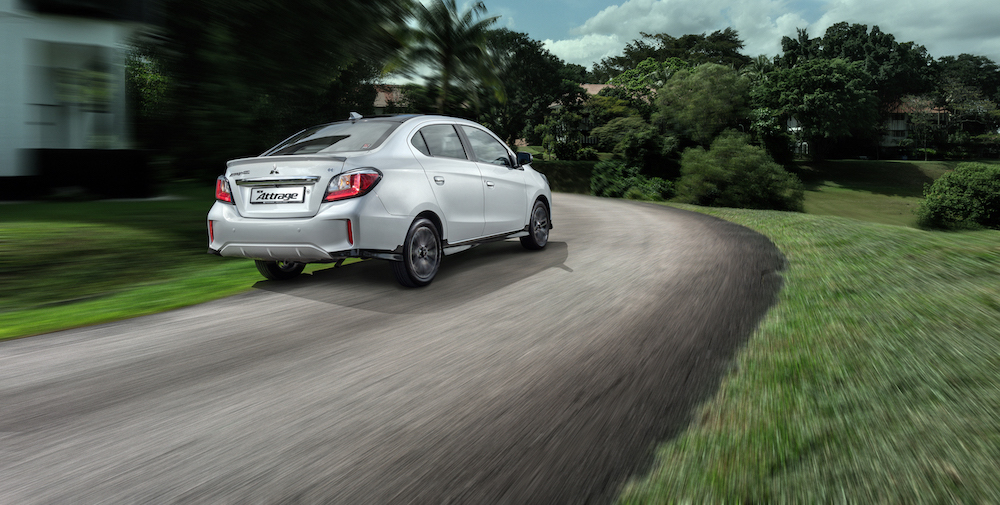 With COEs at nose-bleed levels, it’s hard to find any car under $100K these days. The fact that the Mitsubishi Attrage comes in under that six-figure number is not only pleasantly surprising, but rather serendipitous if you consider what you’re getting for the price.

The Attrage is no slouch when it comes to performance. The 1.2-litre three-cylinder MIVEC engine is probably more than enough for Singapore roads, and is still able to churn out 80PS with 106Nm of torque. The wide-ratio INVECS-III CVT transmission ensures you go through the gears at optimal rpms for a combination of performance and fuel efficiency. The ECO lamp is also a nice touch when it comes on after the engine senses that you’ve been driving in an eco-friendly way. 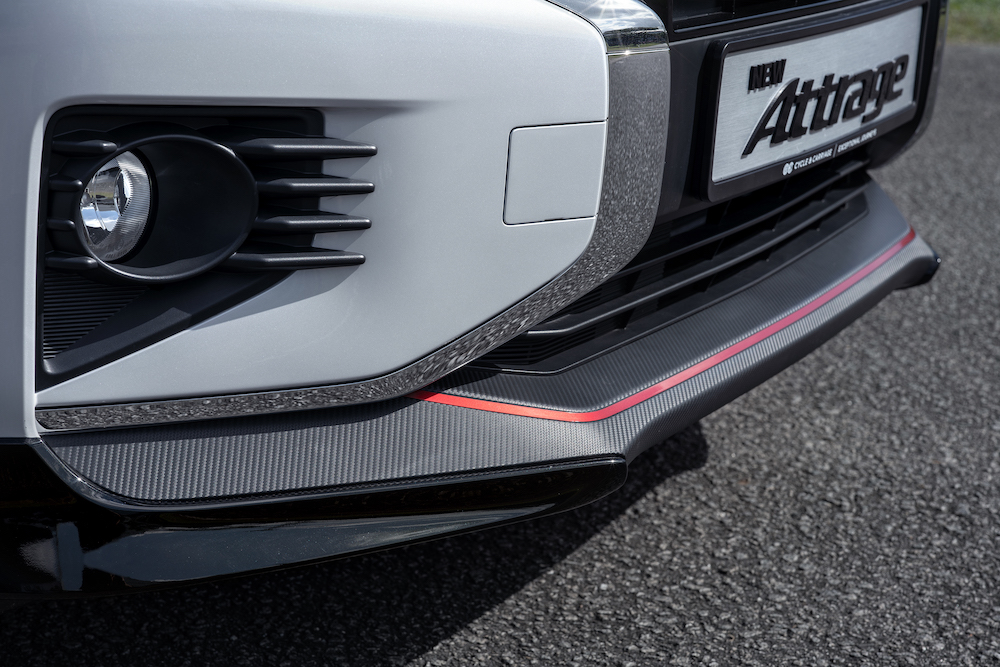 Despite its price, the Mitsubishi Attrage is loaded with features that leave you with little to desire. Apple CarPlay and Android Auto are available with voice activation. The keyless operation system makes getting in and out of the car a fuss-free affair. The 450-litre boot is large enough for most of your needs. The car also has cruise control as well as engine switch button to get on your way.

Safety is front-and-centre with the Attrage, and the car isn’t shy with its features. Anti-lock Braking System, the class-leading six airbags, and pre-tensioners that automatically tighten the front seatbelts in the event of an accident come standard.

Getting To Grips With Tyres