Four doors may hint at practicality, but under the hood, these three cars have enough firepower to take on any racer!

The BMW M5 Competition accentuates its proposition as the Munich brand’s high-performance saloon with brand-new optics. BMW also launched the new M5 along with the M5 Competition, but only the upgraded, performance-enhanced latter is available in Singapore.

First impressions are more self-assuring, highlighted by the larger BMW kidney grille that first debuted on the new BMW 5 Series. The front apron now has larger air intakes that are rendered darker by reflecting less light. The hexagonal centre air intake incorporates the oil cooler along with the radar sensor for the Active Cruise Control (ACC) system.

Towards the rear, thinner side walls of the M-specific tailpipes provide a greater sense of high-tech precision. And the entire rear apron is given a more muscular restyling, with its large diffuser and the new three-dimensional aura of the LED lights.

Inside, BMW designers didn’t hold back in dishing out the technology. The new operating concept, with a larger 12.3-inch central display, makes the BMW M5 more driver-centric than ever. Two new buttons on the centre console give drivers more direct access to settings and displays in the instrument cluster and Head-Up Display.

In M View, a tachometer with coloured warning zones appears in the instrument cluster, and shift lights hint at the best time to change gears. Navigation, distance warnings, vehicle speed and gear, as well as any speed limit or overtaking restrictions detected by the onboard Speed Limit Info system are also shown on the Head-Up Display, stretching its capabilities to greater heights.

M multifunction seats with embossed M logos set the car apart, and let drivers and passengers make a slew of clever adjustments that include seat cushion depth, pneumatic backrest width, and memory positions for the driver. Upholstery comes with Merino trim as standard. 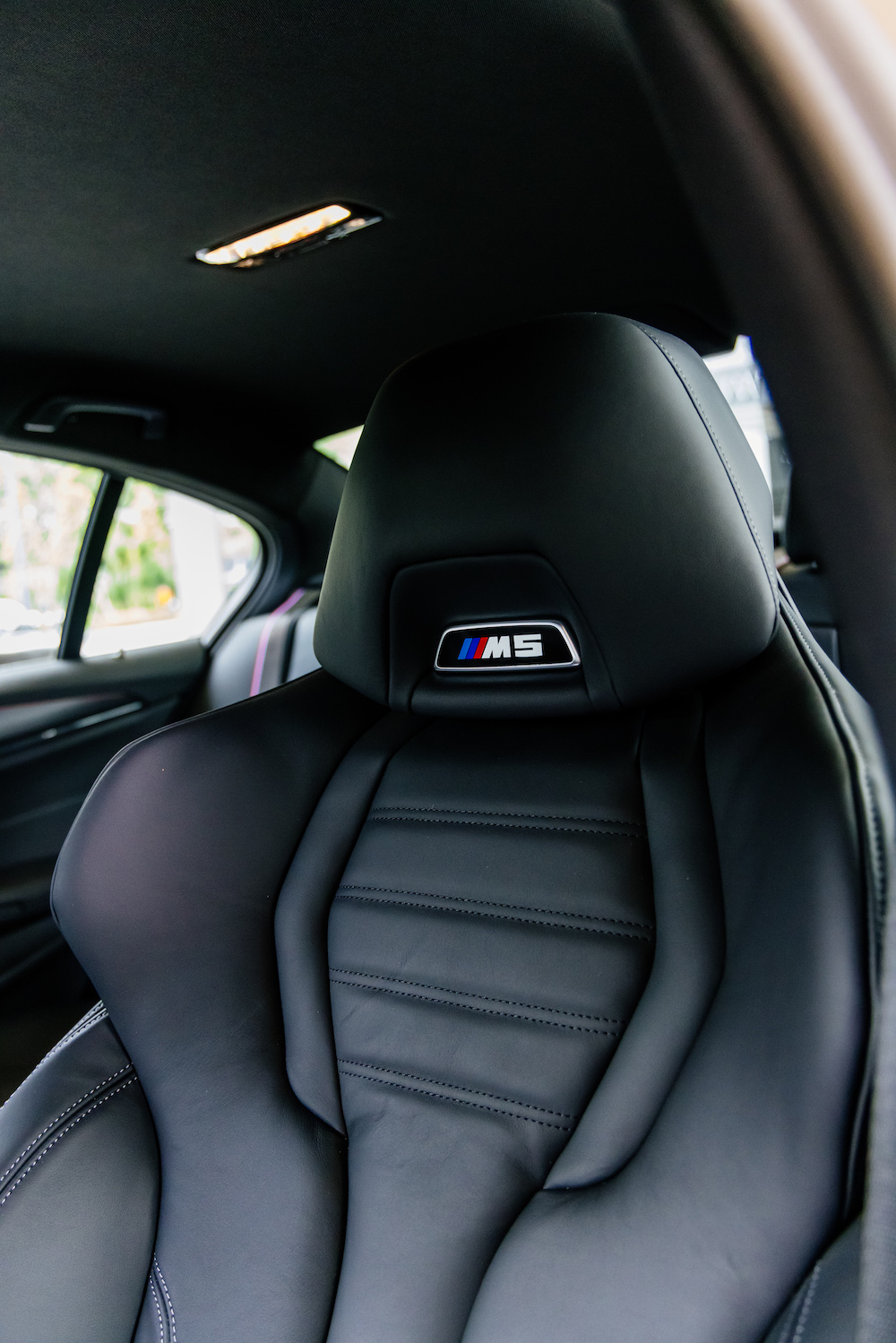 BMW pulled out all the stops when it stocked the BMW M5 with the 4.4-litre, V8 engine with M TwinPower Turbo Technology. With a maximum output of 625hp at 6,000rpm and peak torque of 750Nm, the BMW M5 Competition transforms urban elegance to track audacity in a heartbeat. 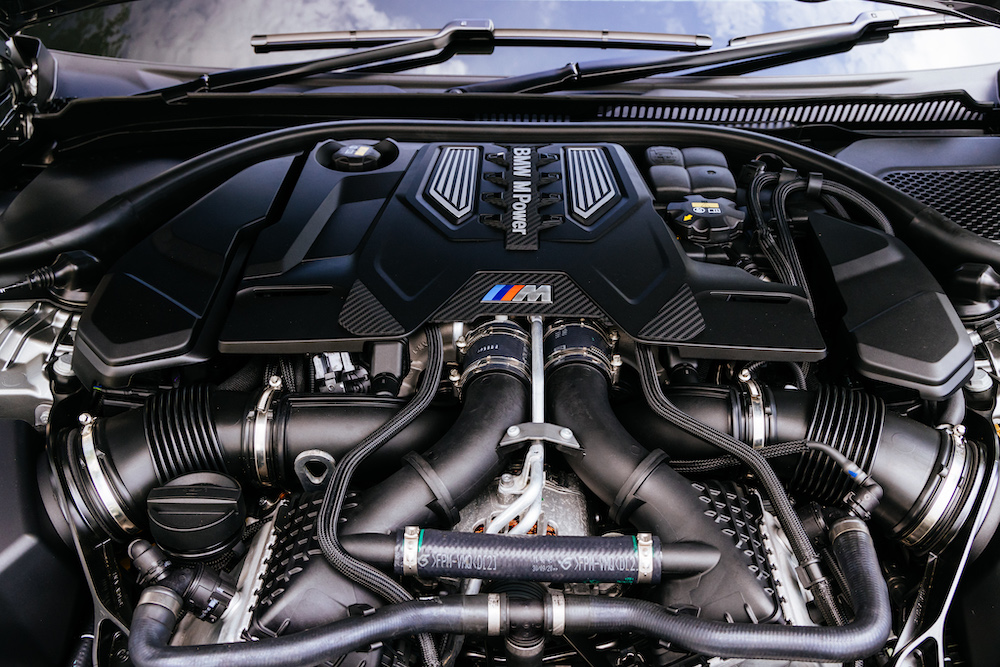 BMW M GmbH has combined the rear-wheel-biased M xDrive intelligent all-wheel-drive system with the M-specific chassis modifications, including special options for the Variable Damper Control system and M Servotronic steering. What this all means is that drivers can now tailor their BMW M5 Competition to personal preferences and driving situations. The dedicated M Mode button allows a toggle between Road and Sport settings. And holding it down engages the Track mode that is dedicated to race circuits.

Thanks to the symbiotic interaction between the M xDrive system and the Active M Differential, nothing is lost when transferring power from the engine to the wheels. An electronically controlled multi-plate clutch allows torque to be distributed between the front and rear wheels in silky smoothness, just before Active M Differential judiciously splits it again between the two rear wheels. Now, drivers, too, can control the distribution of power between front and rear wheels, while also adjusting the level of the Dynamic Stability Control system. 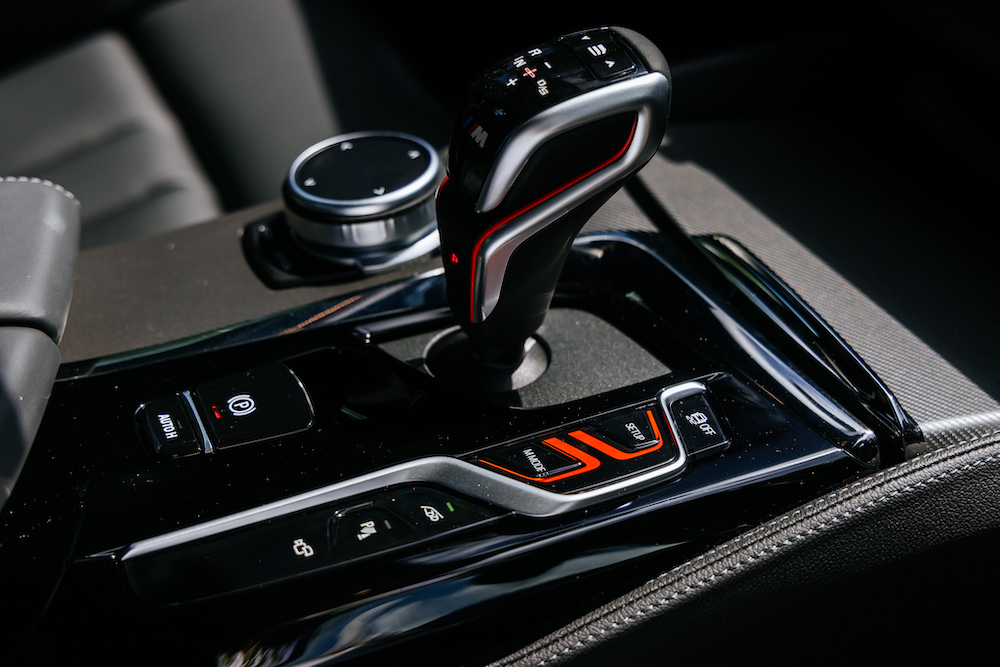 Through the Variable Damper Control and M Servotronic steering, drivers can choose from COMFORT, SPORT, and SPORT+, depending on their needs or moods.

The power of the BMW M5 Competition requires the best in stopping capability. M compound brakes that are significantly lighter than conventional cast iron versions are fitted as standard. The perforated, inner-vented front brake discs are rendered unique by six-piston fixed callipers that are emblazoned with the M logo. At the rear, the single-piston floating-callipers with integrated parking brake can now be painted in High-gloss Black or High-gloss Red as an option. To really stand out, buyers can also opt for the M Carbon ceramic brakes with gold-coloured callipers with the M logo.

Audi’s A4 has been one of the most popular European sedans in Singapore for some time. But for drivers who want a little extra when they step on the accelerator, the Audi S4 is a fine upgrade.

You won’t need a magnifying glass to notice the difference in looks. The S4 owns all the hallmarks of Audi’s handsome saloon line, but with added accents that hint at its sporty enhancements. Large air inlets that are filled with honeycomb grilles are accentuated by silver frames. And the silver exterior mirror encasements together with the silver contoured sill trims catch the eye when viewed from the side.

The S4 is as smart looking from the rear as it is from the front and sides. LED lights with dynamic indicators come standard, and the large diffuser is finished in classy matt dark chrome with a silver trim. The four chrome-plated exhaust pipes are made more noticeable by the rib design in the lower section. Paint finishes for the S4 include Daytona Gray, Quantum Gray and Turbo Blue. 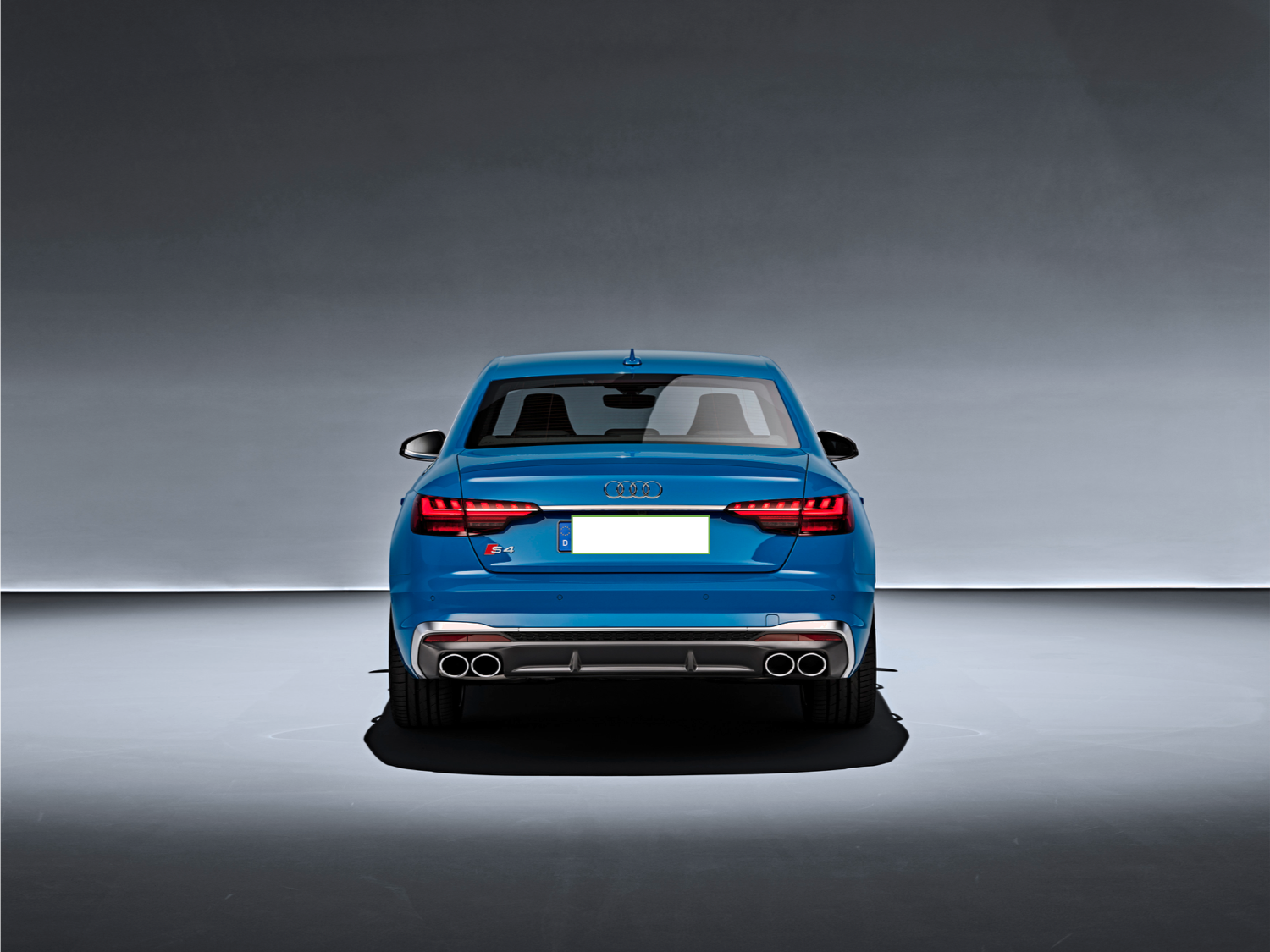 The Audi S4 in Singapore comes powered by the 3.0 TFSI engine that puts out 354hp and 500Nm of torque. The eight-speed tiptronic transmission features short, sporty ratios in the lower gears while lengthening the upper register to improve fuel consumption.

With this sort of power, drivers would be happy to have the quattro permanent all-wheel drive in play. Standard S sport suspension lowers the car by 23mm compared to the A4, and the S4 offers S-specific sport suspension with damper control that is managed via the electronic chassis platform, which controls the sport differential too, if it is opted. Audi drive select dynamic handling system lets drivers choose between Comfort, Auto, Dynamic, Efficiency and Individual to suit their preferences and needs.

Brakes for a car that performs like this never take a back seat. The ventilated discs in front measure a hefty 375mm, and are made distinct with red six-piston calipers with S logos.

Inside, the S4 sets itself from the regular A4 with palpable touches. Cool black is the hue of choice. Sport seats come standard and are adorned with Nappa leather, diamond quilting and S embossing. The pedal caps and the footrest are made of stainless steel; the inlays are made of matt brushed aluminium or optionally carbon atlas. 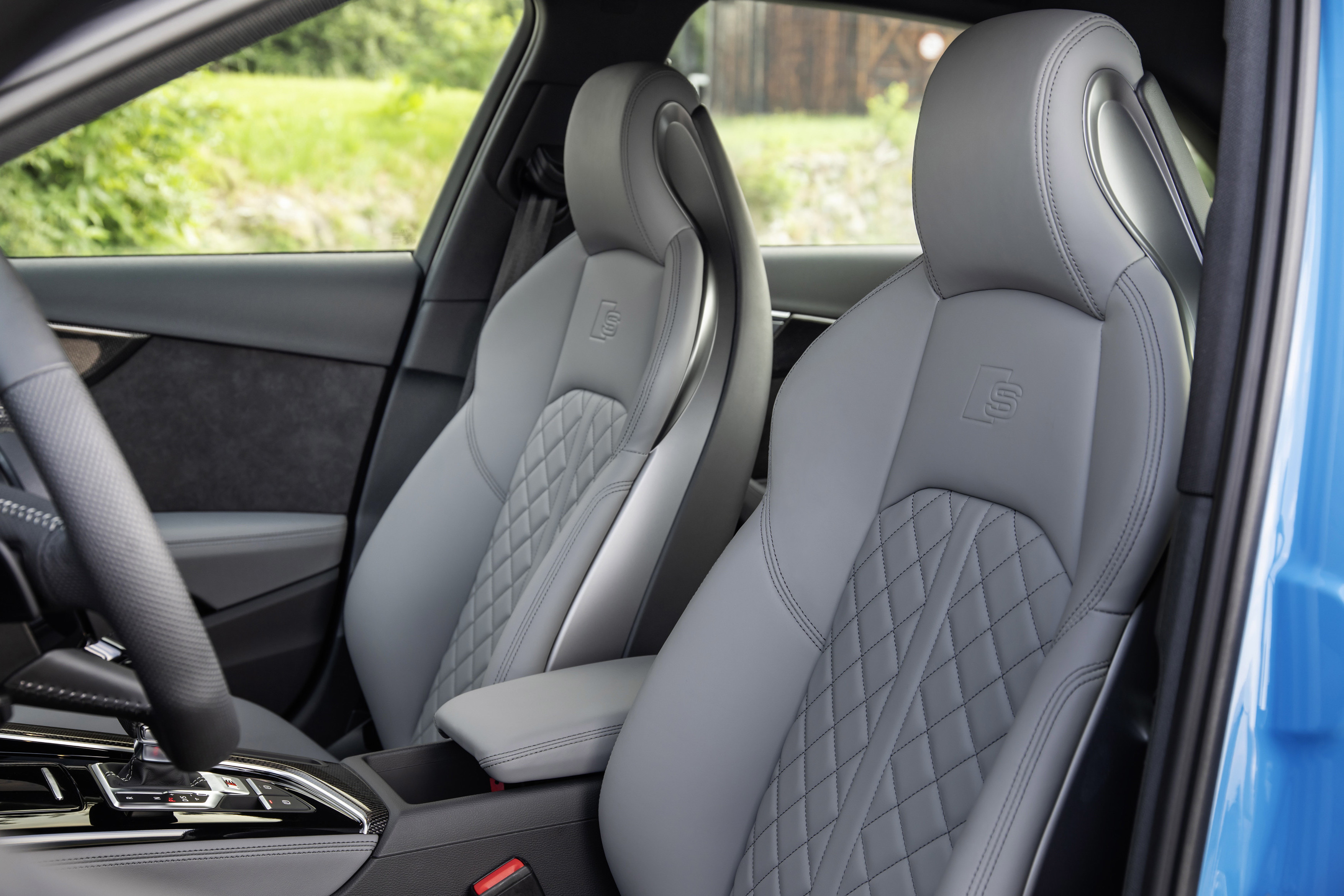 Audi’s virtual cockpit highlights the interior experience with a specific look, starting with a welcome screen. Displays changes with drive mode while also providing information on key items like engine oil temperature, boost pressure of the turbocharger, and even lap times at a track… you know — the kind of information someone who wants an understated rubber-burning performance sedan would love. 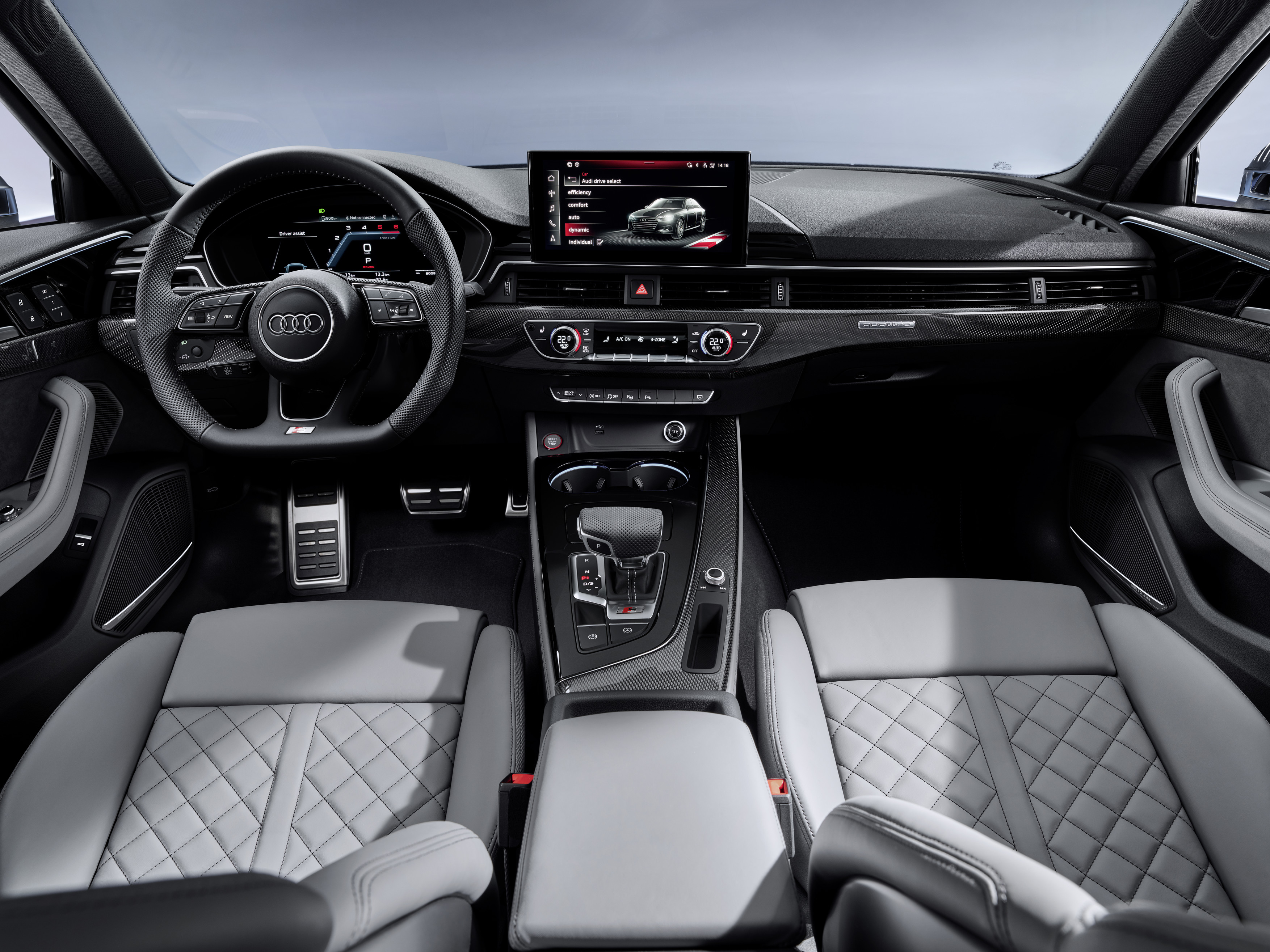 Not many people know this, but Alfa Romeo’s Quadrifoglio has its roots firmly imbedded in the history of motor racing. Nearly a century ago, the Quadrifoglio won the first ever Grand Prix World Championships in 1925, and then claimed the first two modern Formula One World Championships, together with two more world titles, in 1975 and 1977. Needless to say, the people at Alfa Romeo know a thing or two about building performance automobiles.

True to its genesis, the Quadrifoglio’s heart rests in the Alfa Romeo 2.9-litre V6 Bi-Turbo powerhouse. Engineered from a single piece of aluminium, the engine is made more efficient through the Alfa Cylinders’ Efficient Management. There is little compromise as the rear-wheel drive Giulia Quadrifoglio can reach 307km/h in top speed.

With the help of the Alfa Aero Splitter, the Giulia Quadrifoglio can get from 0–100km/h in just 3.7 seconds. This moving carbon fibre appendix is integrated into the front lower fascia, which automatically adjusts to improve aerodynamics and downforce to optimise grip and stability at any speed. Naturally, with this kind of thrust, Alfa Romeo has also put together a suite of road-handling features to improve the drive.

The Giulia Quadrifoglio’s safety and driver assist features are worthy of mention. Active Blind Spot Assist, Forward Collision Warning with Autonomous Emergency Brake, and Driver Attention Assist all work together to ensure you get from point A to B in one piece. And to make driving ever more fuss-free, the Hill Descent Control, Active Cruise Control and Park Assist hint at a future of self-driving cars. 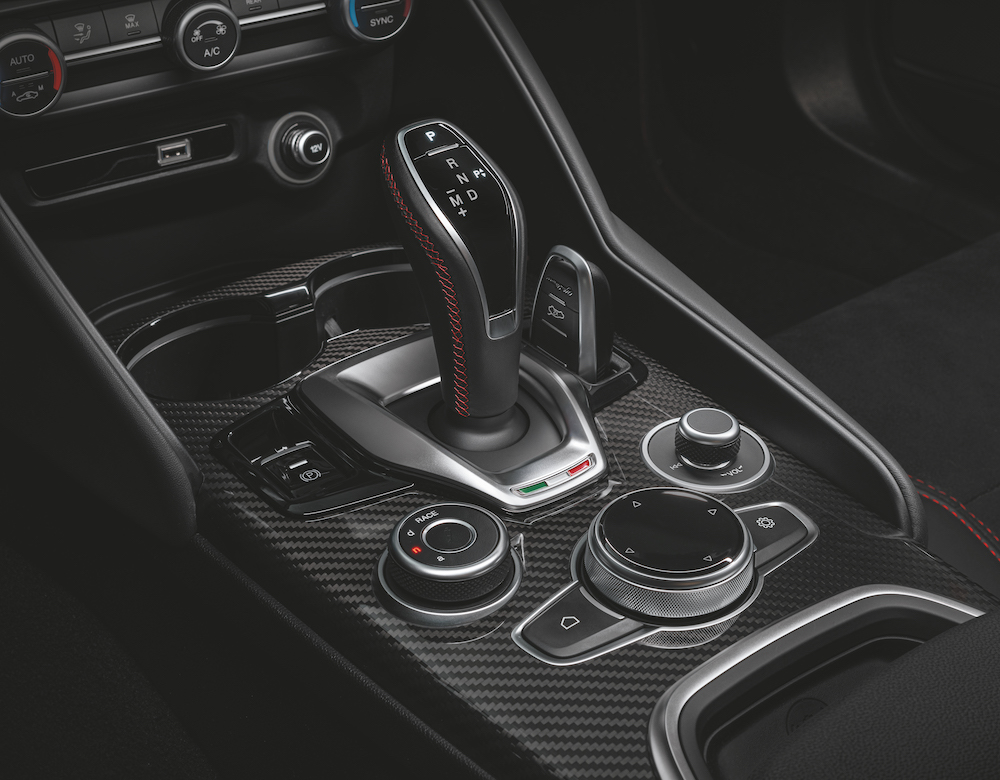 This being an Italian brand, you can expect that form follows function. Inside the Giulia Quadrifoglio, Carbonshell Sports seats by Sparco provide driver and passenger with hand-stitched Alcantara leather. Seating comfort can be adjusted in eight ways, with a four-way power lumbar adjustment. 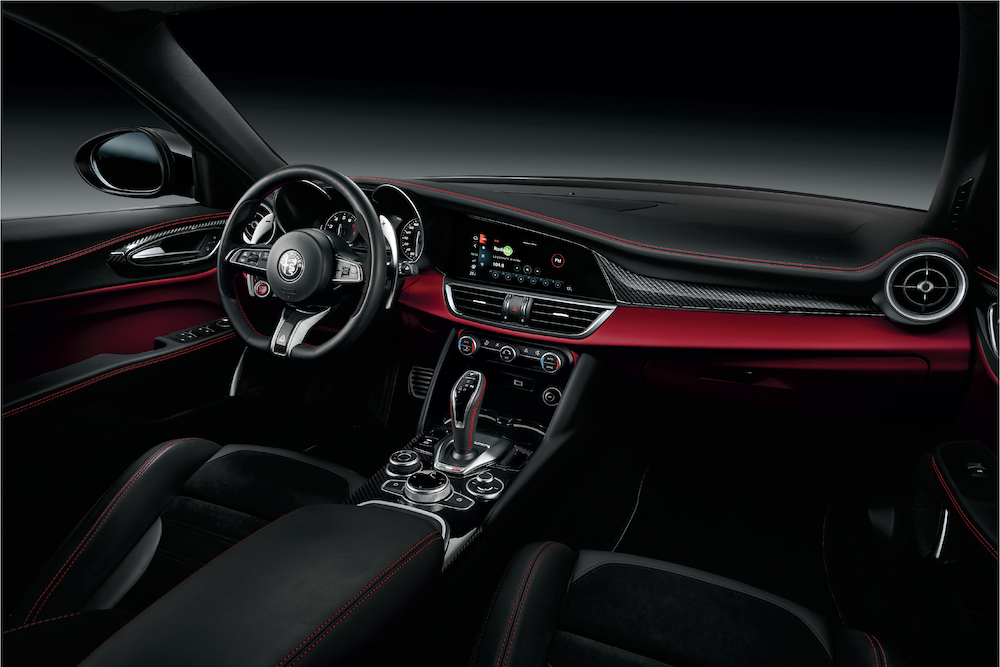 The craftsmanship and design of the centre console combine both artistry and usability. The leather-wrapped gear shifter is well integrated into the control hub, while additional storage space and wireless charging for your smartphone provide needed practicality.

Alfa Romeo’s new 8.8-inch multitouch display lets you manipulate your apps and widgets either on the touchscreen or a rotary dial. Alfa Connect System lets you hook up to Apple CarPlay or Android Auto for customised connectivity. Audiophiles will enjoy the 900W Harman/Kardon system that can pump out their favourite tunes through 14 speakers and one subwoofer, making the exhilarating ride in their Giulia Quadrifoglio even more enjoyable. 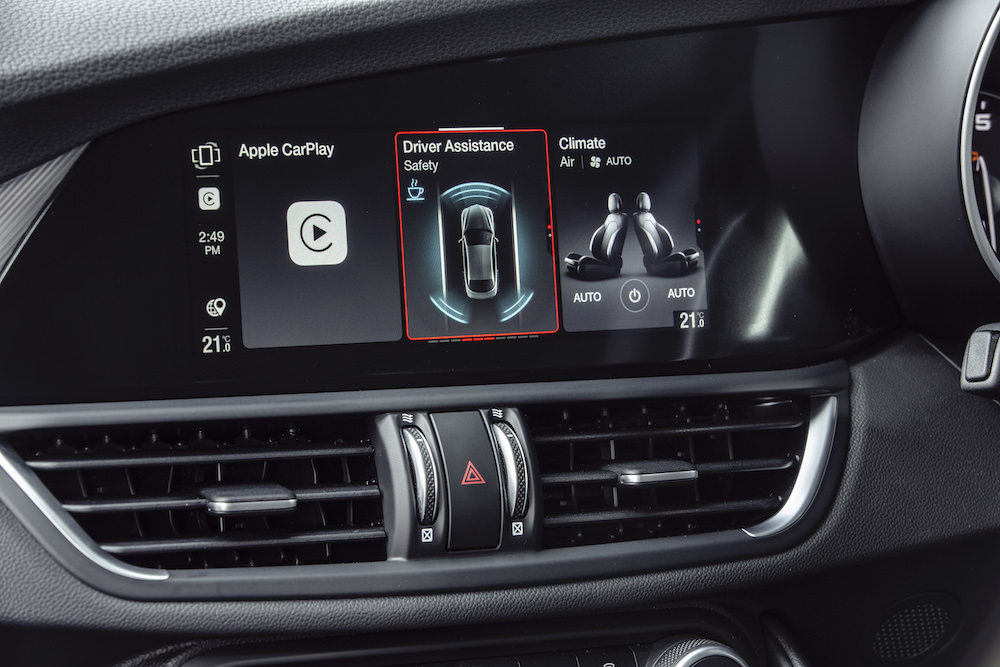 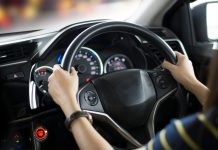 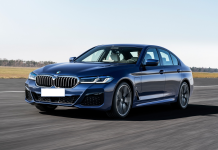 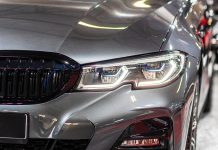 Lighting The Way Ahead