Are you familiar with the new Seven Wonders of the World? 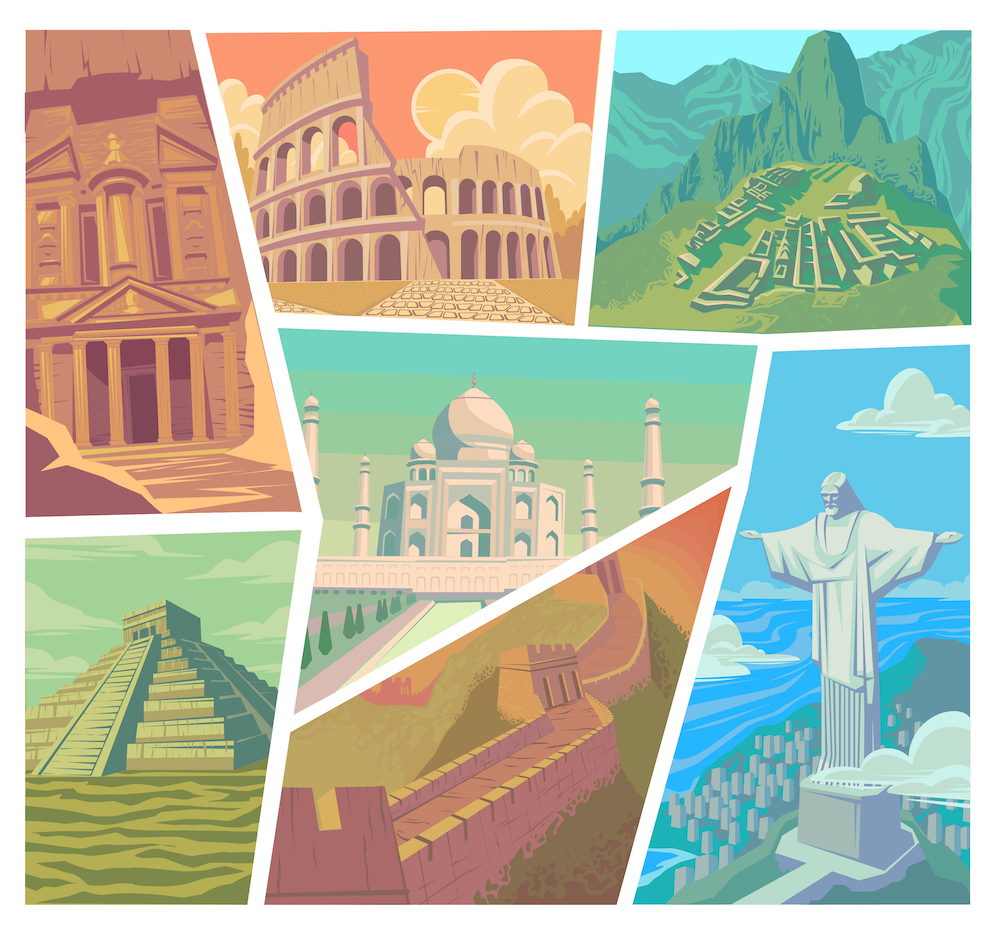 Of the original Seven Wonders of the Ancient World, only the Great Pyramid of Giza still stands. To create a new list, the New7Wonders Foundation, based in Switzerland, started a worldwide popularity poll in 2000, asking participants to choose from a shortlist of 200 existing monuments. By the time the polls closed in 2007, more than 100 million votes had been received. The top seven locations, all of which are UNESCO World Heritage Sites, were announced on 7 July 2007. They are as follows (not in any order of merit).

1 Great Wall of China
Country: China
More than 13,000 miles long, the Great Wall of China is, no doubt, a magnificent feat of human achievement. But it is not visible from the moon — this myth has been debunked many times, yet persists in pop culture. The Wall is actually a series of fortifications built across the ancient northern border of China over centuries to protect against nomadic groups. Construction was believed to have started between the 8th and 5th century BC, during the Spring and Autumn Period, and ended in the Qing Dynasty. Many portions of the Wall have fallen into disrepair, but sections near Beijing and other tourist-friendly centres have been preserved and renovated.

2 Petra
Country: Jordan
If you’re a fan of Harrison Ford and caught Indiana Jones and the Last Crusade, you would have been awed, like the rest of us, by the stunning sandstone façade of this city — hardly anybody had heard of the place prior to the movie’s premier in 1989. The city’s amazingly carved rock faces are testament to its status, between 400BC and 106AD, as the capital of the Nabatean Empire, which grew rich and powerful due to its control of the Spice Road. When Petra was named a UNESCO World Heritage site in 1985, the Bdoul Bedouins, who had always lived in caves inside the city, were persuaded by the Jordanian government to move to Um Sayhoun, a settlement a few miles away. In exchange, the Bdoul Bedouins were granted exclusive rights to tourism businesses in Petra.

3 Christ the Redeemer
Country: Brazil
It is to Brazilians what the the Merlion is to Singaporeans. Standing atop Mt Corcovado in the city of Rio de Janeiro — where Joseph Schooling picked up his Olympic gold medal — this statue is the fourth largest sculture of Jesus Christ in the world, and the largest in the Art Deco style. At 30m tall, with an armspan of 28m, Christ the Redeemer was designed by a handful of engineers and artists, who took nine years from planning to unveiling. You can reach the monument by train or road. The 20-minute train ride is highly recommended, as it crosses a portion of Mata Atlantica, a huge forest hugging the Atlantic coastline of Brazil.

4 Machu Picchu
Country: Peru
Located about 600m above sea level in the Andean highlands of Peru, Machu Picchu is a mystical complex of palaces, plazas, temples and homes built by the people of the Inca Empire. Archaeologists are still not sure whether it was built as a ceremonial site, a military stronghold, or a retreat for ruling elites. Many buildings are aligned with astronomical events; more amazing is the depth of engineering skill displayed even though the Incas did not have the benefit of mortar, metal tools, or even the wheel! Today, this city is no longer hidden from the outside world — more than 75,000 people visit it each year. It is accessible by train from the city of Cusco, or hiking on the Inca Trail, which comes in a four-day or two-day package.

5 Chichen Itza
Country: Mexico
Located in the Yucatan state of Mexico, this archaeological site is one of the most visited places in the country. Built by the Maya civilisation, the site’s name means “the mouth at the well of Itza”. Experts say the city reached its zenith around 600AD and fell around 1000AD. The famous stepped pyramid that dominates this site, the Temple of Kukulkan, actually sits on a much older temple. Visit during the spring and autumn equinoxes (20 March and 22 September) and you are likely to see serpents slithering down the pyramid — thanks to the sun casting strange shadows. Other notable structures include the Great Ballcourt and the Temple of the Jaguars.

6 Colosseum
Country: Italy
Think of it as a giant, al fresco version of our Esplanade. While it was famous for holding gladiatoral fights to the death, the Colosseum also hosted dramas, reenactments and even public executions. Located in the Eternal City of Rome, Italy, this massive amphitheatre (189m L X 156m W X 57m H) could hold 50,000 spectators in its heyday. Construction began around 70AD and took about a decade to complete. Each Good Friday, the Pope will lead a procession in the Colosseum — perhaps to appease the many Christians who were killed there for sport during the early days of Christianity. Tour tip: instead of queuing for individual entrance tickets, join a guided tour with a local guide and skip the long lines.

7 Taj Mahal
Country: India
This monument to love and devotion, located in the city of Agra, is renowned for its symmetry. The gorgeous main building is a mausoleum, the final resting place of Mumtaz Mahal, the favourite wife of Mughal emperor Shah Jahan. Construction, beginning around 1632, took about 20 years. The ivory-white marble of the structure has been inlaid with semi-precious stones — such as jade, amethyst and turquoise — that form patterns. Stay for more than a few moments and you are likely to see the marble change colour throughout the day. The complex also includes a garden with long reflecting pools and a mosque. Photo tips: the east-facing side of the main building has a beautiful glow in the morning sun; and wear strong colours to stand out against the white marble

Did you know that Singapore has its very own UNESCO World Heritage Site? The Singapore Botanic Gardens received the recognition at the 39th Session of the World Heritage Committee, which was held in Bonn, Germany, in 2015.

So if the travel bug has bitten you hard, but you aren’t able to fly to see any of the new seven wonders of the world due to COVID-19 restrictions, mitigate those feelings by taking a stroll around the beautiful grounds of the Singapore Botanic Gardens — and please put on a mask and maintain social distance!