AA’s Emergency Preparedness on the Road seminar saw experts sharing insights on how motorists can respond better in critical situations. 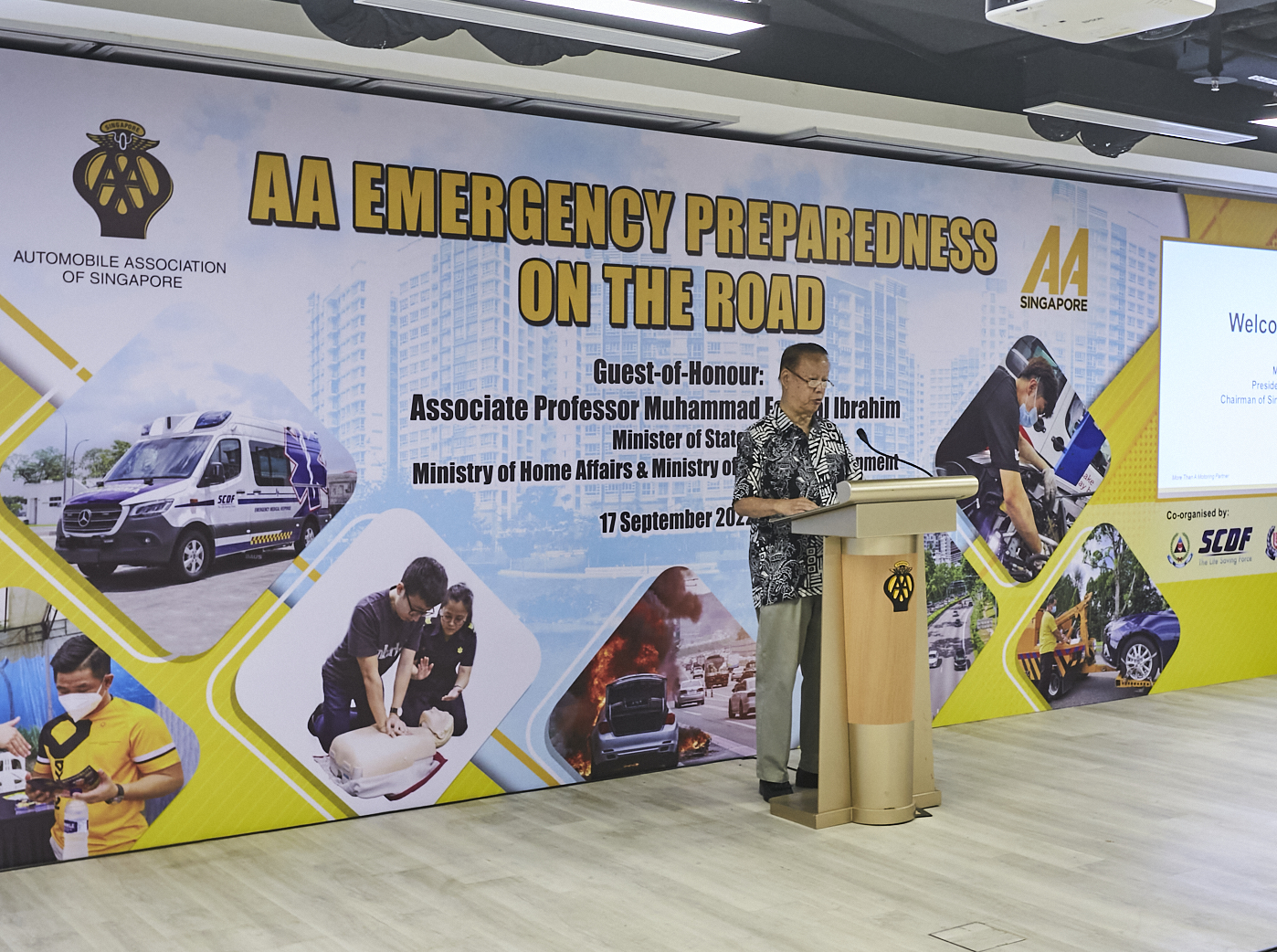 In his address, Mr Tay expressed concern over the number of traffic accidents and vehicle fires in recent months – and that the AA Emergency Preparedness on the Road event would be timely in addressing the concerns drivers may have and educating more drivers on essential emergency knowledge that drivers may face on the road.

Mr Tay elaborated on how vehicle fires start small but can develop rapidly due to the presence of inflammable materials, such as petrol, diesel and lubricants like engine oil, transmission fluid, and brake fluid. As these liquids can combust quickly, it is therefore crucial for vehicle owners to maintain and service their vehicles regularly, and also to react quickly in the event of a road accident or vehicle fire, as failing to do so may impede quick access to the scene of the accident, Mr Tay pointed out. 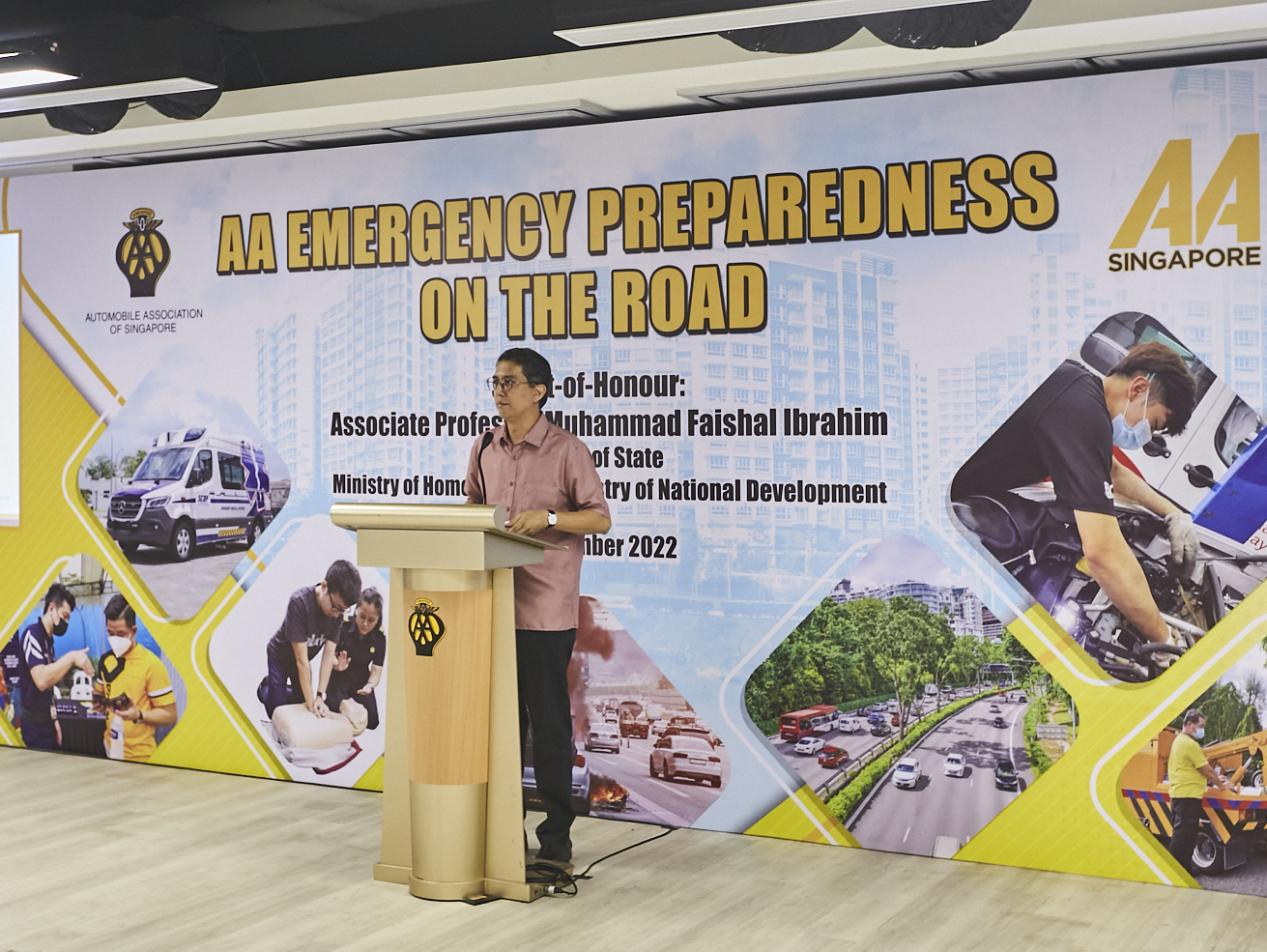 EVERY SECOND COUNTS
The Guest-of-Honour, Associate Professor Muhammad Faishal Ibrahim addressed the participants and thanked AA Singapore, SCDF, SRSC and TP for their partnership and contribution in helping to keep our roads safe. Having worked with Mr Tay for more than 10 years, Associate Professor Muhammad Faishal Ibrahim also thanked Mr Tay’s involvement and commitment in his efforts to improving road safety in Singapore.

Noting that the number of fatal accidents had risen by 25% from 2020 to 2021, he observed, “More people were hurt in traffic accidents last year. Recently, there has been news of vehicle fires. It is therefore important for road users to know how to react in such urgent situations, as every second counts in an emergency.” 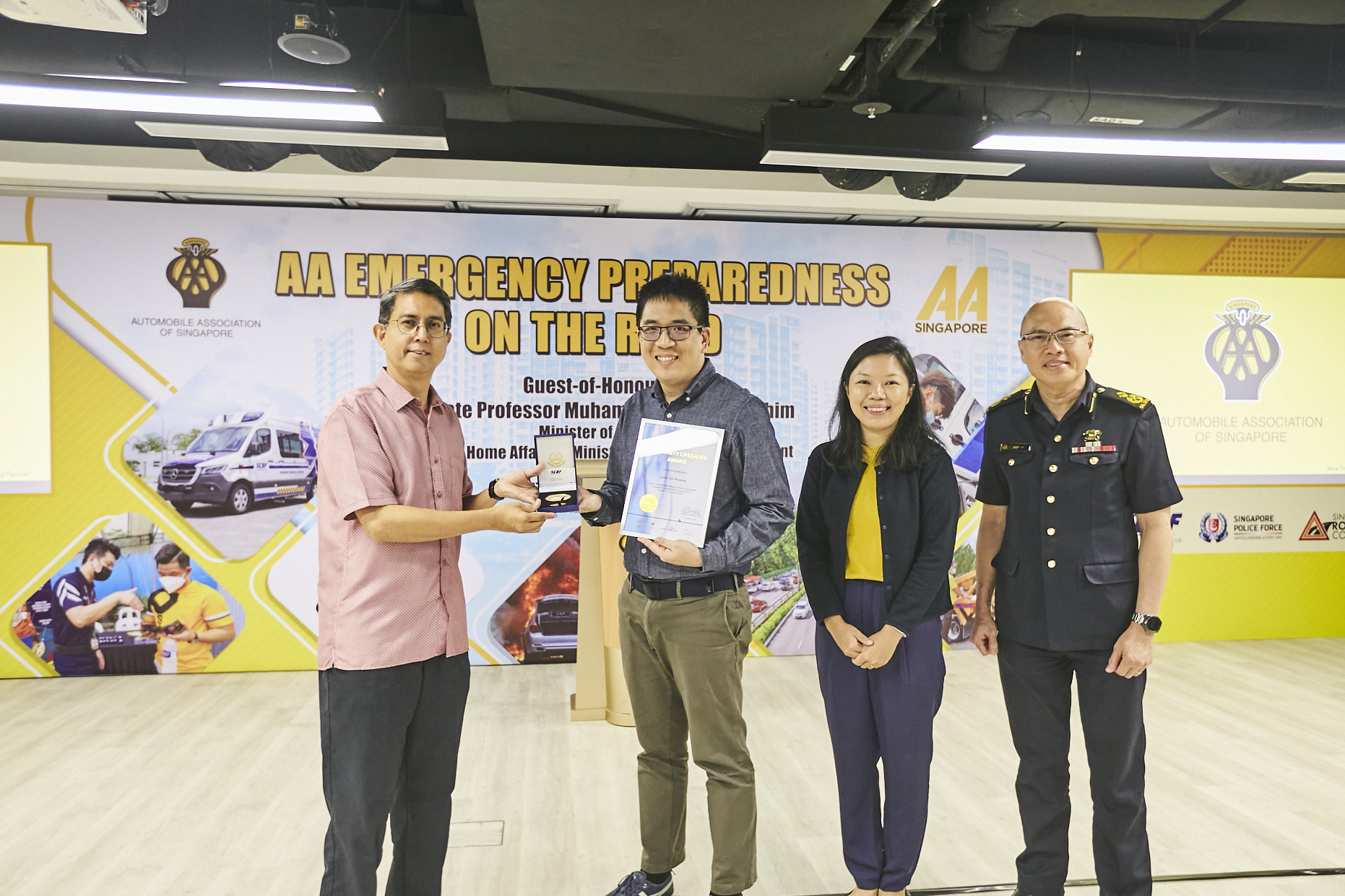 Reminding motorists to give way to emergency vehicles, Associate Professor Muhammad Faishal Ibrahim commended Mr Leslie Lee, for having rendered first aid to an injured motorcyclist who appeared to have skidded under wet conditions near Pasir Ris Drive 8 on the morning of 16 August. A lecturer for paramedic and emergency care at the Institute of Technical Education (ITE) College East, the 40-year-old driver took a first aid kit from his car, bandaged the rider’s bleeding right arm, and stayed with him until the ambulance arrived. 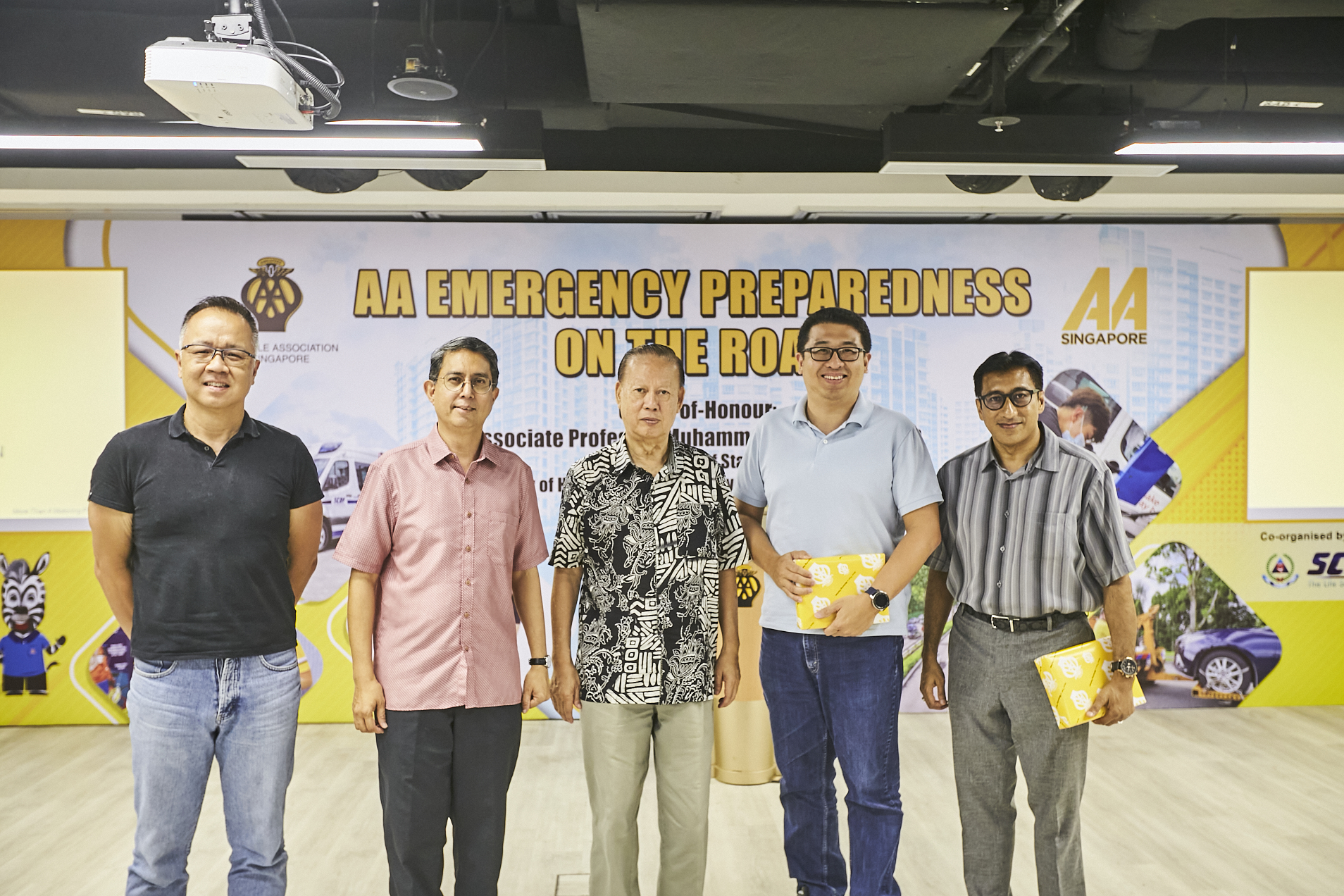 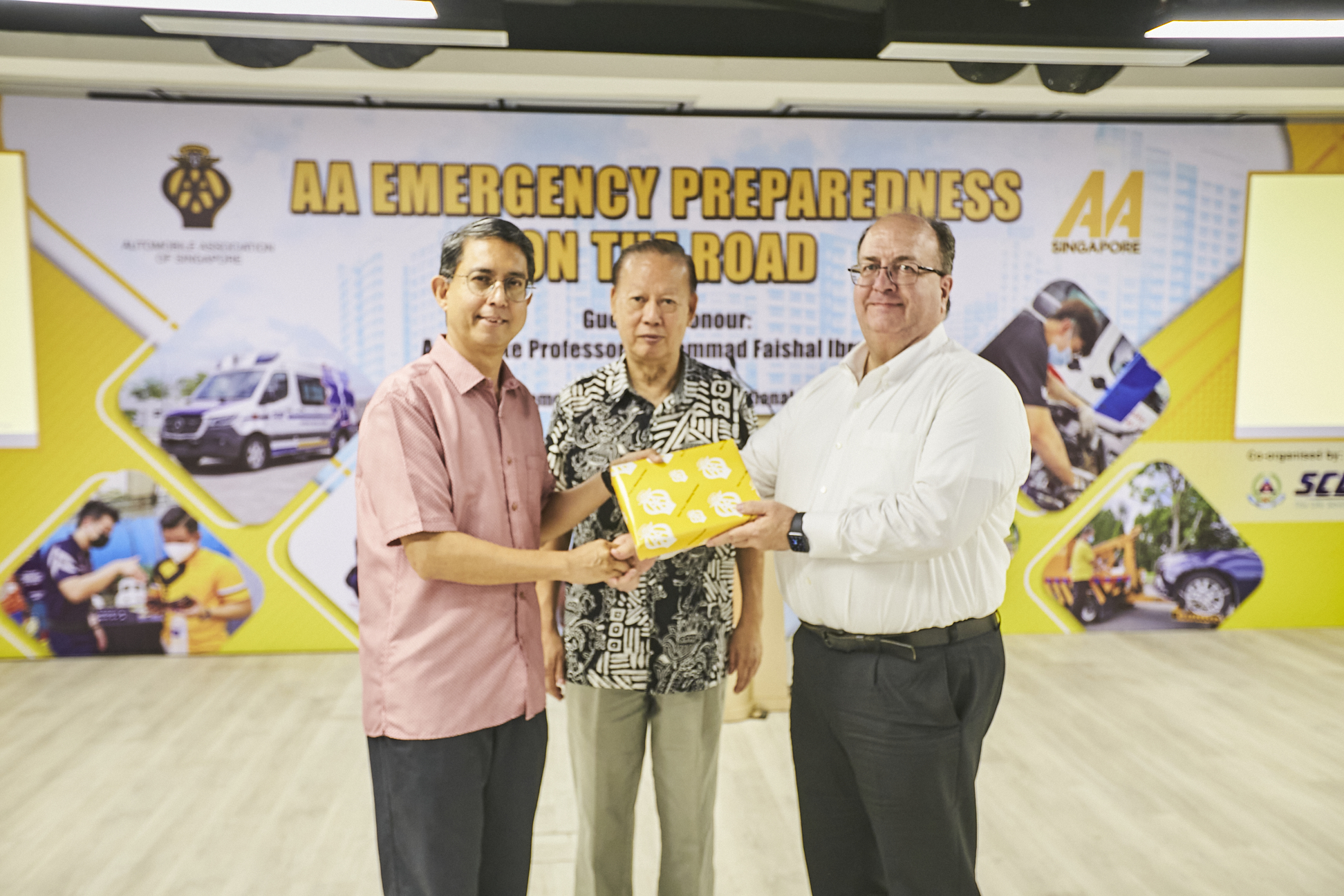 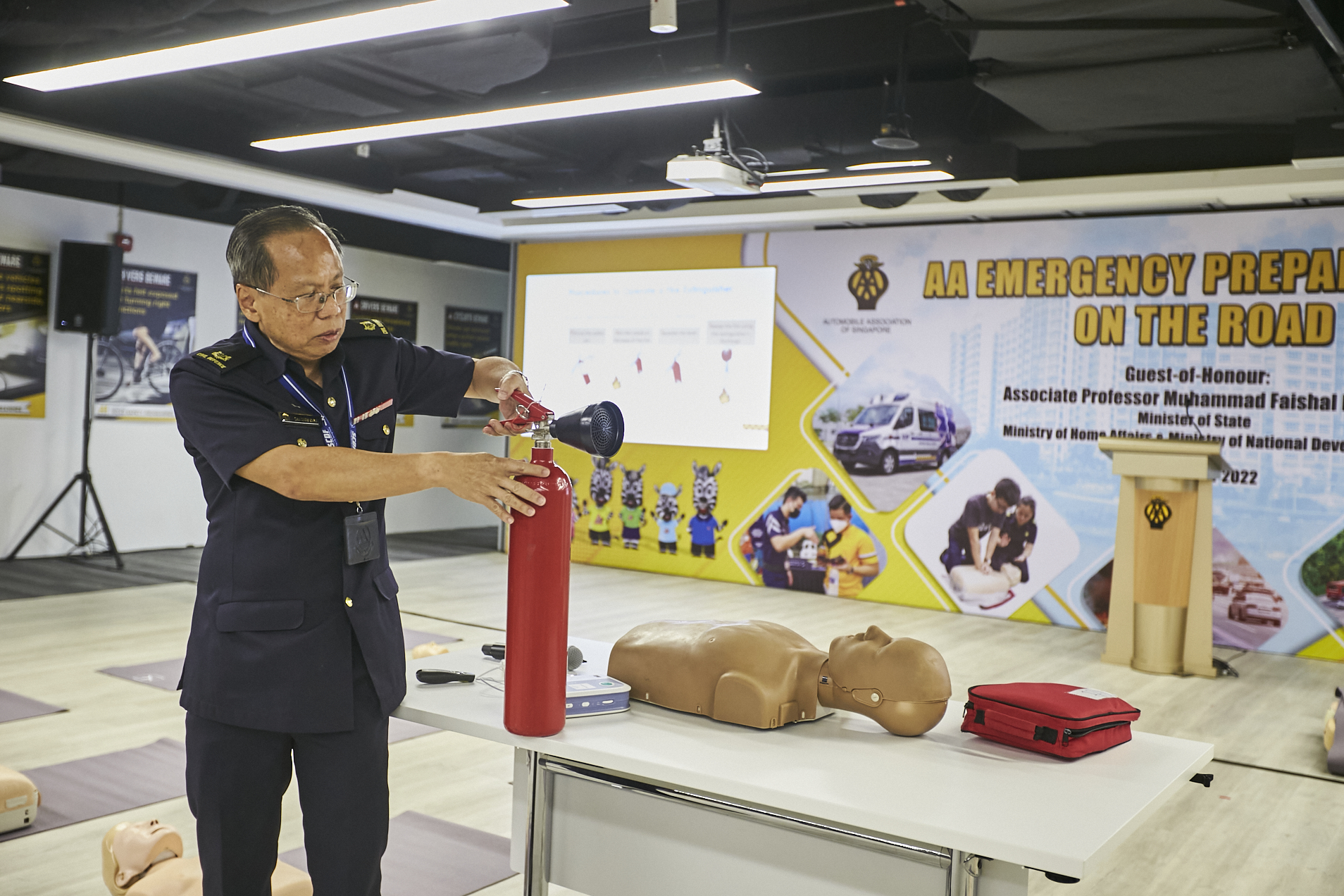 MANAGING VEHICLE FIRES
Guest Speaker, SCDF Major (V) Tan Teow Chye, went through with the participants on what they can do in the event of a vehicle fire, as well as how to escape safely.

Major Tan shared that vehicles can catch fire at any time and it does not matter whether the vehicle is moving or stationary —  he also shared that vehicle fires happen primarily due to overheating, electrical faults, or after a collision. “As all fires start small, it’s important that we fight the fire before it gets to the stage where more effort will be needed to put it out,” said Major Tan, who then advised and encouraged motorists to always keep a fire extinguisher in their cars to suppress the flame while waiting for the arrival of SCDF.

He also stressed the necessity of car maintenance, such as servicing one’s vehicle regularly, and checking for defects to prevent fires. Participants were also given pointers on ways to minimise injuries during a fire. 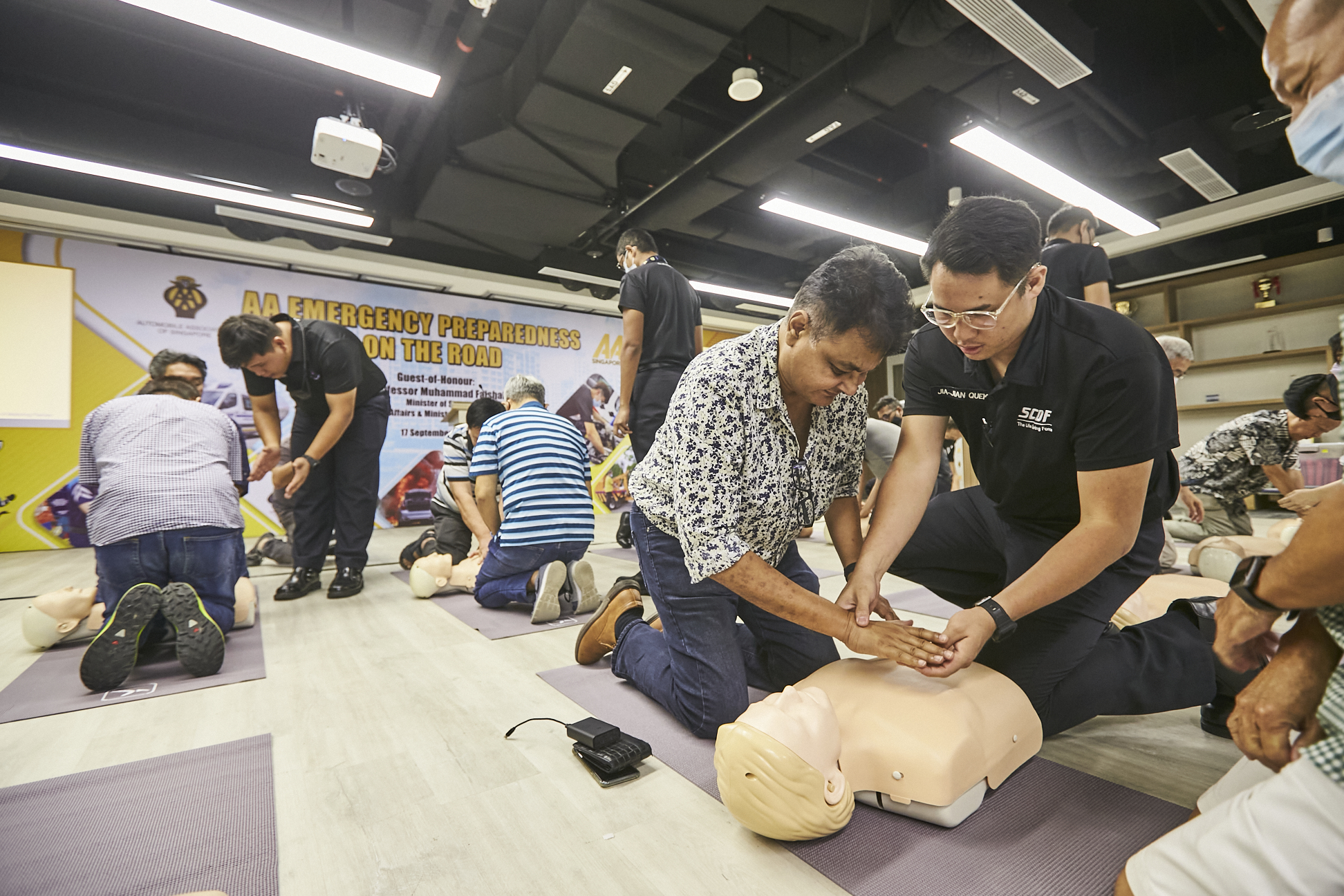 Major Tan also spoke about SG Secure, a national movement that aims to sensibilise, train and mobilise Singaporeans to prevent a terrorist attack. He then gave a demonstration of improvised first aid skills, offering tips on performing cardiopulmonary resuscitation (CPR) as well as on how to stop bleeding. Participants had a chance to try out CPR techniques on mannequins as well as practice applying bandages to stop bleeding. 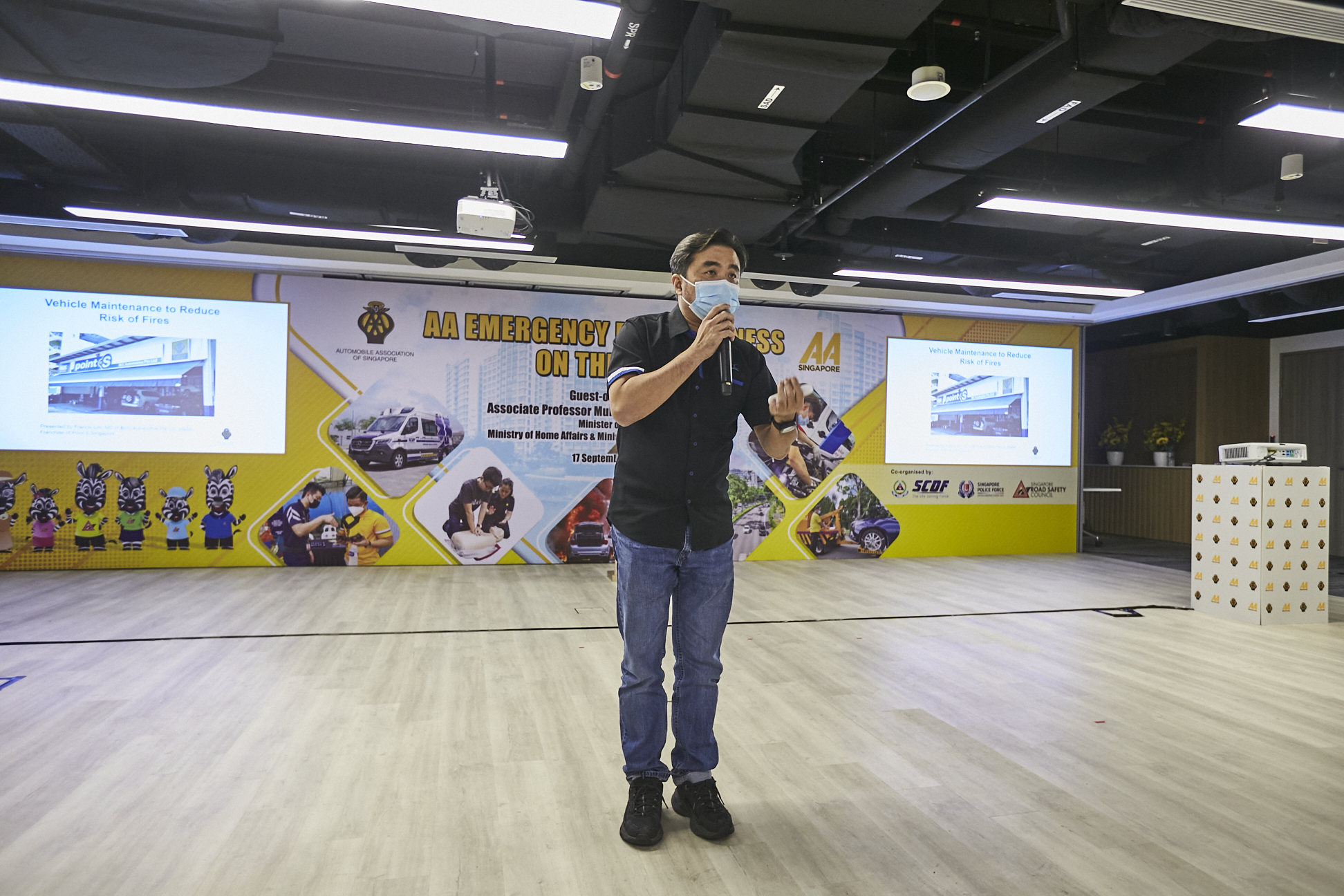 Mr Lim then highlighted the importance for drivers to conduct self-inspection of their cars and to send their vehicles for periodic vehicle maintenance, to reduce the risks of fire. He also provided participants with tips on how to identify the signs that might possibly indicate that their vehicle is on fire. 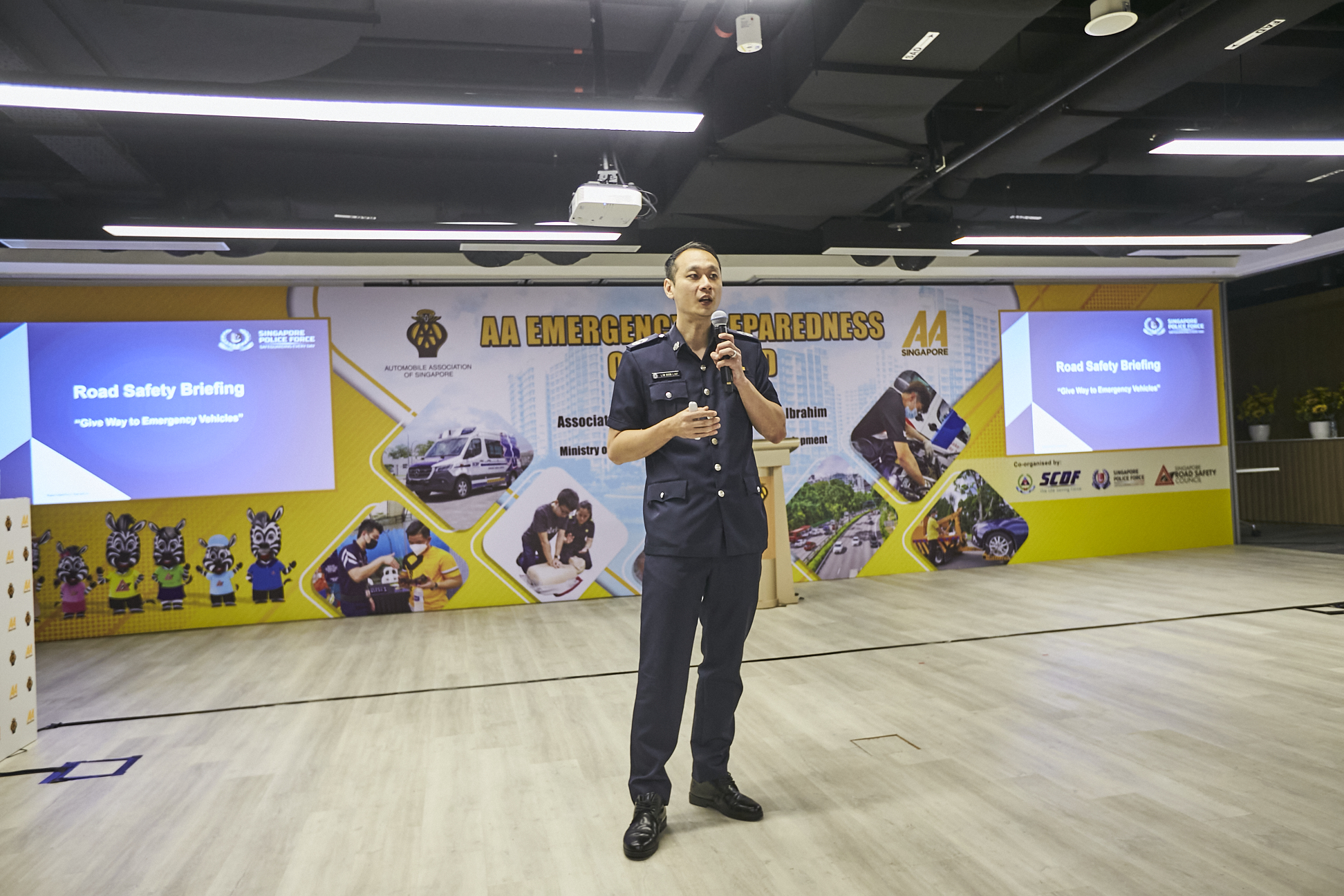 GIVING WAY TO EMERGENCY VEHICLES
For the last segment, Mr Lim Boon Liat from TP took the opportunity to give a Road Safety Briefing to all the participants.

In his segment, he informed motorists that obstructing emergency vehicles that were responding to a crisis, could result in fines and demerit points. At the same time, he stressed the need to give way to such vehicles in a safe manner, in which there is no excuse for a reckless act, even if it was done for a noble reason, and drivers caught doing so will be held liable. 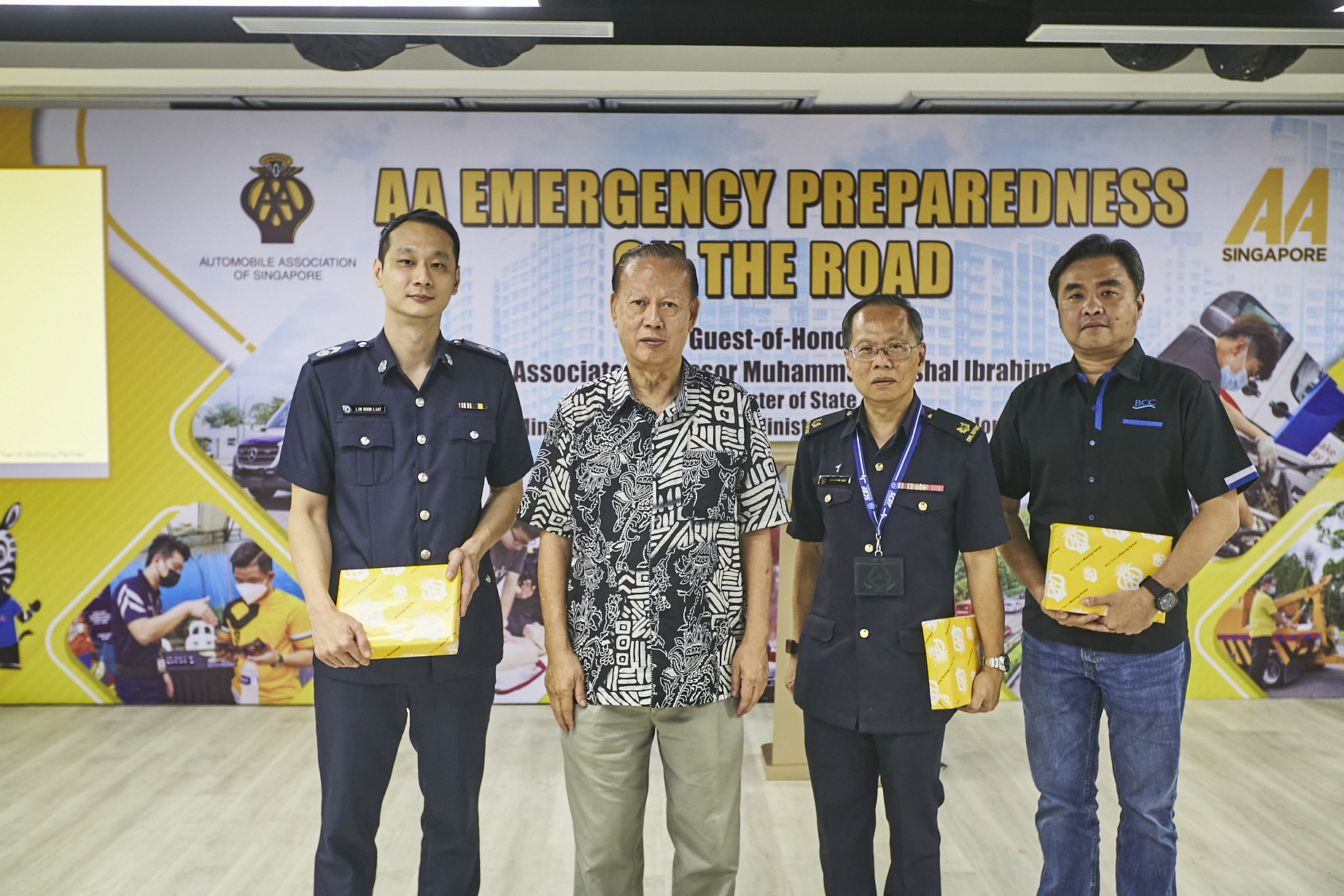 AA Singapore, Mr Bernard Tay presented a token of appreciation to the Guest Speakers, for their insightful sharing with the participants of the AA Emergency Preparedness on the Road Seminar and for making the seminar event possible.

Lastly, AA Singapore CEO, Mr Lee Wai Mun, concluded the AA Emergency Preparedness on the Road with a closing speech.  In his closing remarks, Mr Lee commented that he is glad that AA Singapore can have the opportunity to organise the AA Emergency Preparedness on the Road seminar event, which will help address and cover important topics and equip drivers with relevant skills that they may utilize when faced with an emergency on the roads. 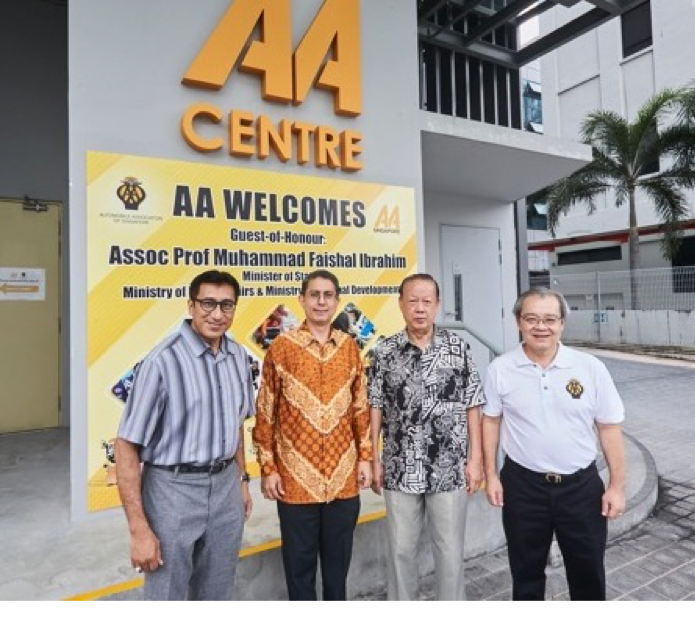 A Great Way To Listen