There are many things you can do to ensure your child is safe while riding in your car. One of them entails installing your child’s car seat in a right place.

So you’ve purchased a car seat for your baby and are ready to take him on a drive. Before you set off, make sure you know how to place your car seat in a safe way.

The optimal place for your child’s car seat is in the back seat, away from active air bags. If the car seat is placed in the front seat and the air bag inflates, it could hit the back of a rear-facing car seat — where your child’s head is — and cause a serious or even fatal injury. An air bag could also hit and harm a child riding in a forward-facing car seat.

THE SAFEST POSITION
If you’re placing only one car seat in the back seat, install it in the centre of the seat. A study conducted in 2008 to evaluate the association of a car’s placement in the back seat and risk of injury revealed that children between the ages of zero and three seated in the centre had a 43% less chance of injury in a collision than those seated on the driver or passenger side of the vehicle.

Although statistically not the safest car seat position, the rear passenger side appears favoured by parents. This is likely because it provides parents with ease of access, as the restraint is on the pavement side of the vehicle. Also, it may not always be practical or even possible to place the car seat in the middle because of the size of the seat or the lack of a seat belt or ISOFIX points of your vehicle. ISOFIX, or the International Standards Organisation Fix, is an international standard system that allows you to fix your child’s car seat to your car without a seatbelt.

Placing the car seat in the rear driver position is still considered safe; however, it is less so compared to the rear passenger because it’s a more common side of impact. Generally, it is recommended that this be done only if you have more than one car seat that needs to be installed.

Being in the front should be the last resort due to the higher risk of distraction to the driver as well as being close to the most common side of impact. If you have to put your child in the front passenger seat, make sure the front airbags are deactivated before you set off. A child under the age of 12 should never be positioned in a seat with a passenger airbag. 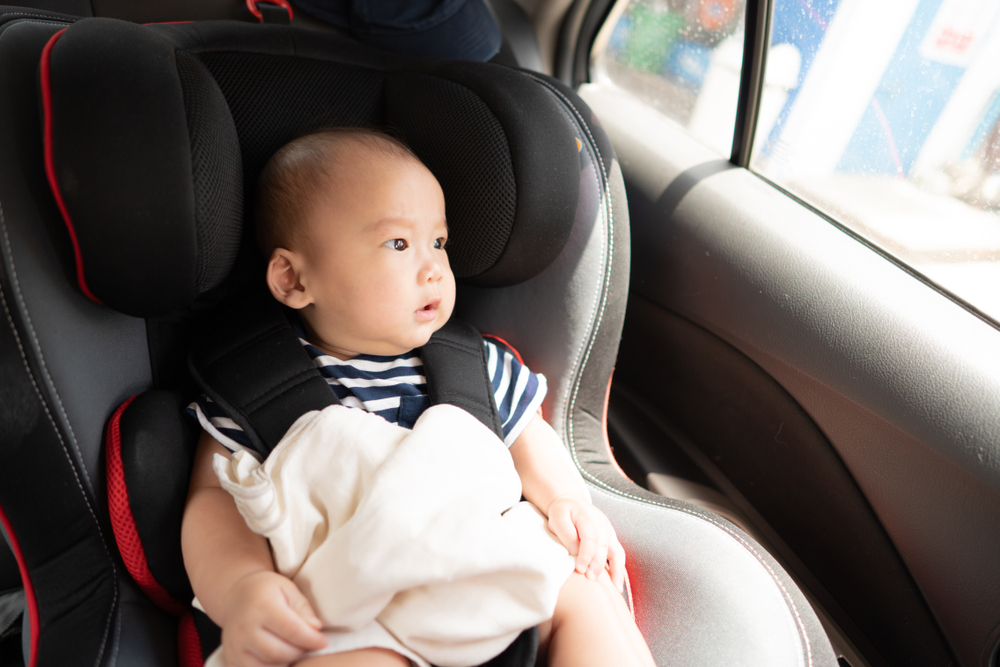 MORE THAN ONE SEAT
If there are three children in the family — say a newborn, a toddler, and a four-year-old — and you can’t fit three seats along the back, you could place:

If you have two car seats, the rear centre seat and the seat behind the passenger are the best places to install them. The child in the car seat with the least protection should ride in the middle.

When To Use Hazard Lights