The 92-day London-to-Singapore drive was flagged off by Singapore’s High Commissioner to the UK, Her Excellency Ms Foo Chi Hsia.

On 10 August 2019, Her Excellency Ms Foo Chi Hsia, Singapore’s High Commissioner to the United Kingdom, flagged off a convoy of 16 cars lined up at Intercontinental London – The O2. The 31 participants of the convoy were off on the longest AUTOVENTURETM yet: a road trip from London to Singapore that is estimated to last 92 days.

Singapore’s High Commissioner to the UK, Her Excellency Ms Foo Chi Hsia, commencing the flag-off as she waves the Singapore flag.The day’s programme began at 12 noon, with a lunch at the hotel’s Market Brasserie. The convoy participants were joined by AA Singapore’s President and CEO, Mr Bernard Tay and Mr Lee Wai Mun respectively, as well as distinguished guests, including Guest-of-Honour Her Excellency Ms Foo.

In Mr Tay’s opening speech, he highlighted the significance of this drive. “This year is a meaningful one for both Singapore and the UK, as it will be for our participants as well,” he stated. “As Singapore celebrates her Bicentennial, it also commemorates the beginning of a new era for the UK. The trip will not only be the experience of a lifetime, but also a great opportunity for us to proudly share the accomplishments of Singapore Bicentennial across the world through our participants on their travels.”

After Her Excellency Ms Foo’s address, in which she wished the participants a safe and memorable adventure, it was time for some photo-taking before the convoy set off for their first stop: Canterbury, England.

The drive will be challenging for the convoy as they will be travelling across different terrains and varying climates through 15 countries. The highest altitude they will encounter could go up to 6,345m, when they pass through China. They would also need to adapt to driving on different sides of the road in different countries.

But this was not stopping the members. “When I first heard of the trip, I knew I had to participate in this bucket-list adventure,” AA Member Mr See Lew Hang said excitedly prior to departing for the UK. At 82 years old, Mr See is also the oldest member of the group. “It is definitely a test of endurance, as 92 days is a substantial amount of time to be on the road. However, I feel much safer travelling under the hands of AA Singapore’s experienced expedition leaders, as they would have carefully curated the itinerary and taken care of all necessary travel arrangements,” he added.

A National Day to remember

The flag-off was scheduled on 10 August, the day after National Day, so that AA Singapore could arrange for participants to celebrate the nation’s birthday while still getting sufficient rest for their long drive, which began the next day.

AA Singapore thought it was important to give them a morale booster, since they were thousands of miles away from sunny Singapore. As such, the Association hosted a special National Day lunch on 9 August at Rubens at the Palace. Everyone who turned up were dressed in the colours of the Singapore national flag: red and white. Her Excellency Ms Foo also joined the festivities. But what made the event extra special was the live-streaming of the National Day Parade at the lunch venue.

Later that day, participants attended evensong at Westminster Abbey, together with staff of Singapore’s High Commission to the UK and other UK-based Singaporeans, to pray for Singapore and its people. 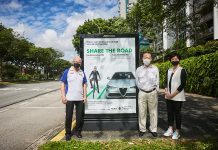 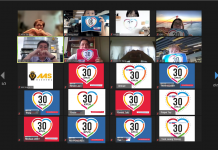 Looking Back… And Forward