When we last caught up with the team, they were about to enter Iran. What did they get up to in the land formerly known as Persia? Read on to find out! 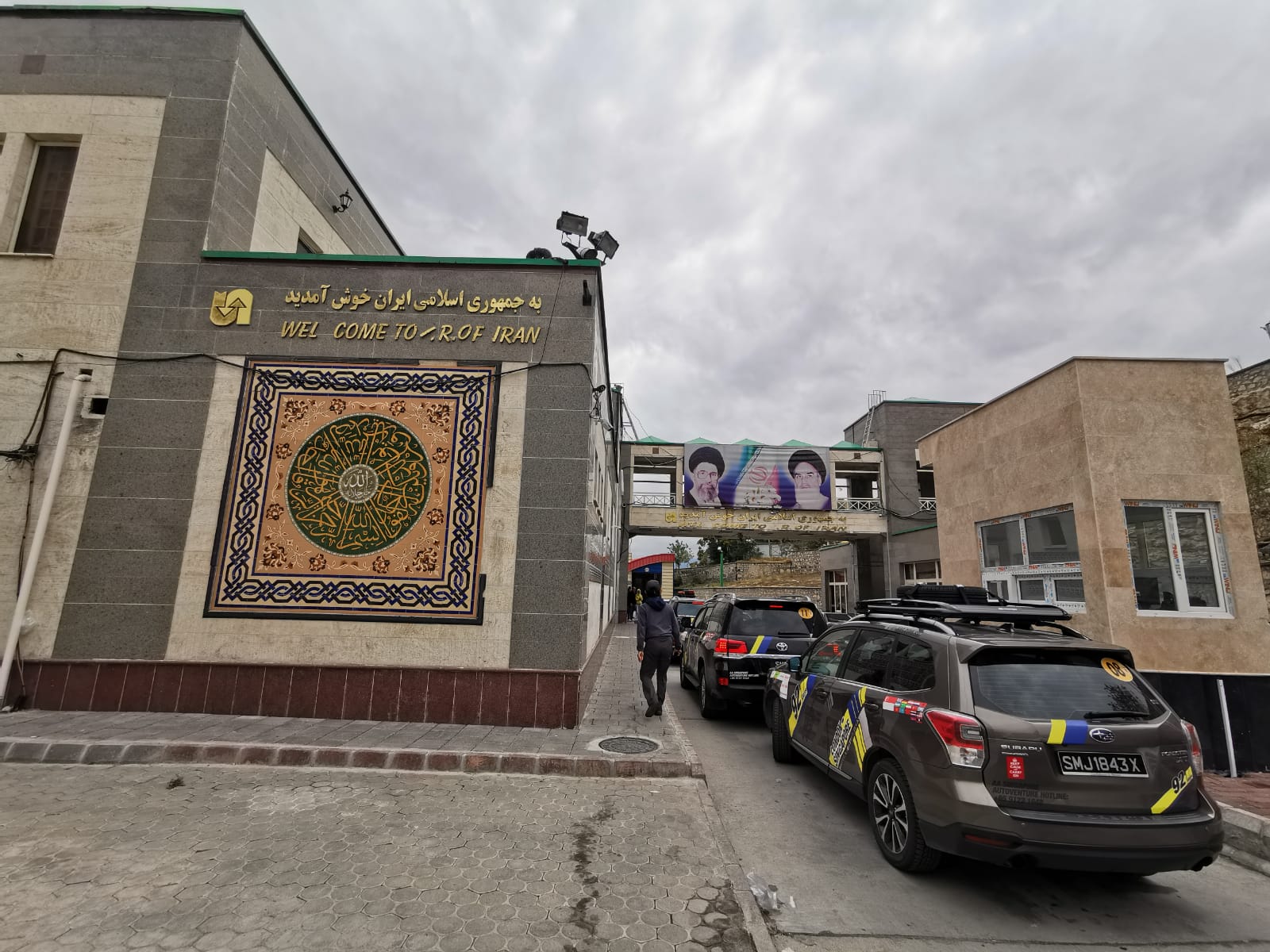 From Van, it is a 215km drive to the Gurbulak border crossing, across which is the country of Iran. The team continued in an upward curve to the North East, followed by a downward curve South East to Tabriz, the capital of Iran’s East Azerbaijan province, where they rested for the night.

The next day, the expedition participants took some time to explore Tabriz, including the Bazaar of Tabriz, the largest covered bazaar in the world and a UNESCO World Heritage Site. The bazaar is divided into subsections known as bazarche, each dedicated to a type of product, such as gold and jewellery (the Amir section) and carpets (Mozzafarieh section). 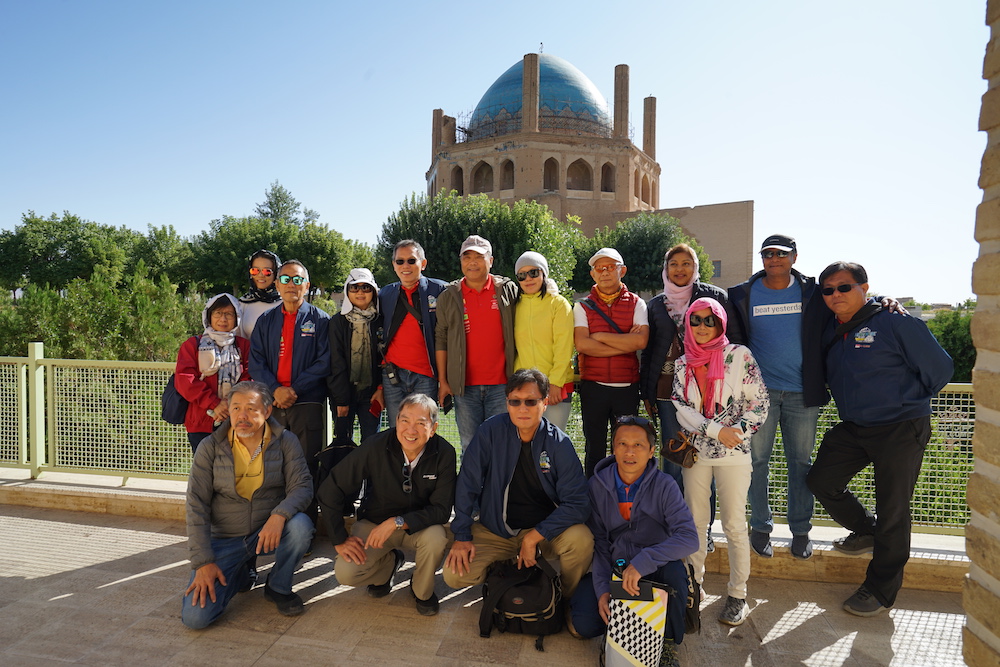 After their shopping spree at the Bazaar of Tabriz, the convoy made their way towards the city of Zanjan, the capital of Zanjan province. Zanjan is famous for its beautiful traditional handicrafts, such as knives, sandals called charoogh, and malileh, which are wares made with silver wires.

Moving along 45km on the road towards Tehran, the participants arrived at Soltaniyeh, famous for the Dome of Soltaniyeh, which are the ruins of a complex built around the mausoleum of a Mongol ruler. The dome itself is the third largest in the world (after the Duomo in Florence, Italy, and the Hagia Sophia in Istanbul, Turkey), while the interior of the complex still holds gorgeous mosaics and murals.

It would be another 300km of driving before they reached Tehran, the capital of Iran. Here, the team rested for two nights before heading south towards Isfahan. 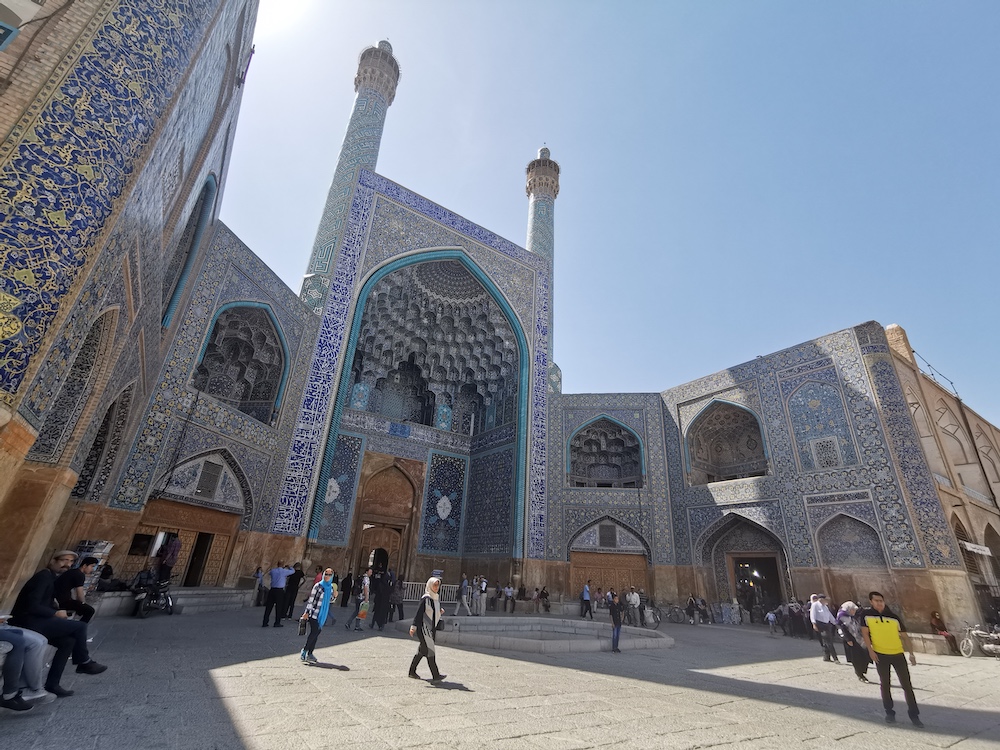 Tehran to Isfahan (450km)
Isfahan was once the capital of the Persian Empire, and is now the third-largest city of Iran. The city is known for its numerous architecturally significant bridges across the river Zayanderud. The team went to view two of these bridges.

The Si-o-Se Pol, or Bridge of 33 Arches, the longest of the city’s bridges at 297m. Beautifully lit in the evenings, the bridge is a popular meeting point, attracting many strollers after sunset. Khaju Bridge, although shorter at 137m, is considered the city’s finest. The interplay of vaults and inlets cools down the air, keeping the temperature pleasant even during the hot season.

They also visited the stunning Masjed-e Imam, which is renowned for the beauty of its seven-coloured mosaic tiles and calligraphic inscriptions. Originally called Masjed-e Shah, its name was changed after the Islamic Revolution of 1979. Construction of the mosque began in 1611, and it is considered a masterpiece of Persian architecture — no wonder it is listed in UNESCO’s World Heritage Sites.

The team took a day trip to Kashan, a roughly two-hour drive north. There, they dropped by Tabatabaei House, referred to as the ‘bride’ of houses in Iran. This is because of the 5,000m2 property boasts beautiful Persian-style architectural details. 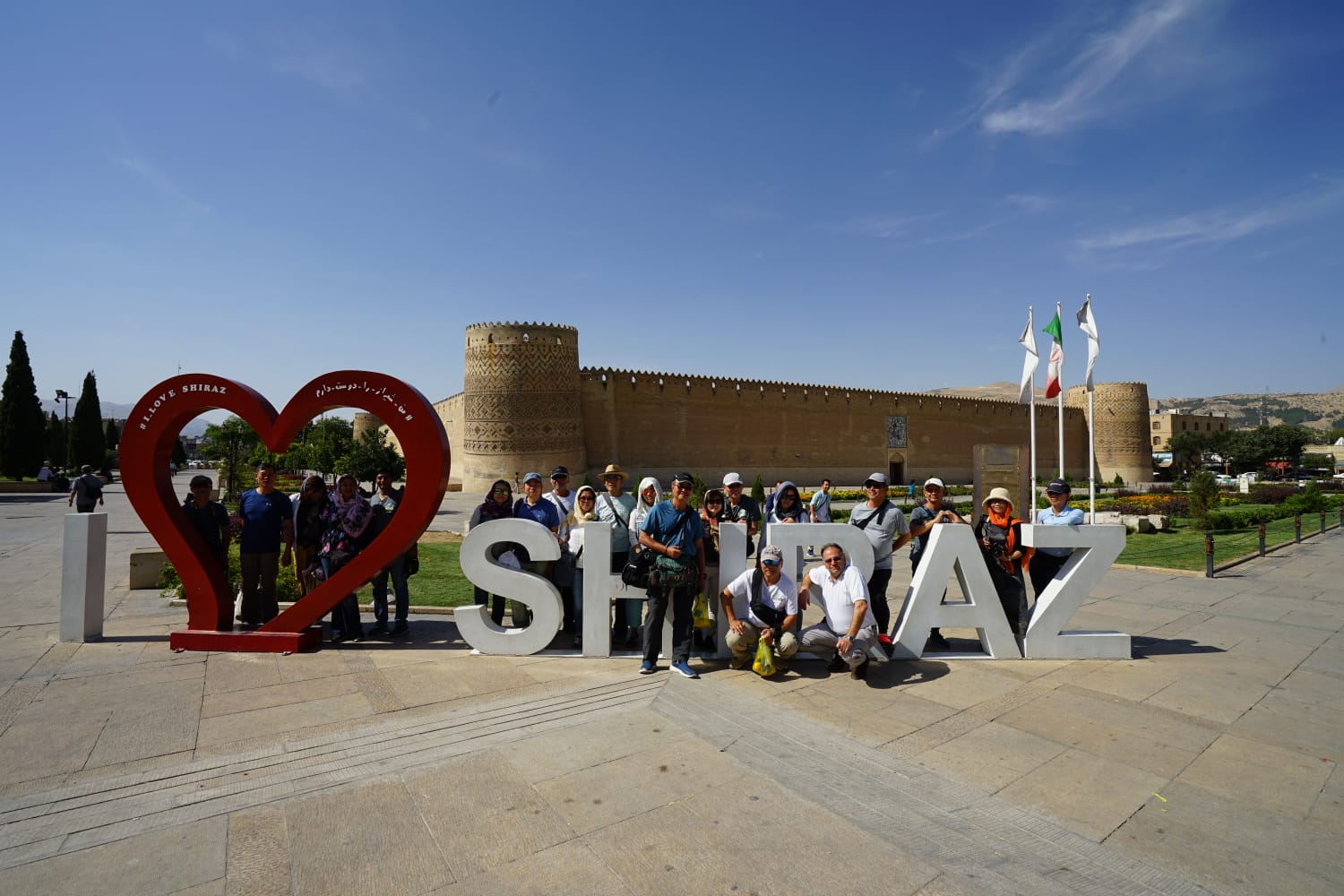 Isfahan to Shiraz (480km)
From Isfahan, the convoy headed south towards the capital of Fars province, Shiraz. Well known for its numerous gardens, Shiraz is one of the oldest cities of ancient Persia, and was its capital during the Zand Dynasty (1750–1800). The team lingered in this city for two nights.

During their time in Shiraz, participants were taken on a day tour of the city. Specifically, they visited the Nasir ol-Mulk Mosque, Shah-e Cheragh Mausoluem, and Tomb of Hafez.

Nasir ol-Mulk Mosque is more popularly known as the Pink Mosque due to the extensive use of coloured glass on its façade, leading to a pink glow on the inside when the sun shines through the windows.

Shah-e Cheragh Mausoluem is probably the most important place of pilgrimage in the city. The site houses the tomb of brothers Ahmad and Muhammad, sons of Mūsā al-Kādhim.

The Tomb of Hafez, which holds the remains of the celebrated Persian poet, is topped by an open pavilion and located in Musalla Gardens. 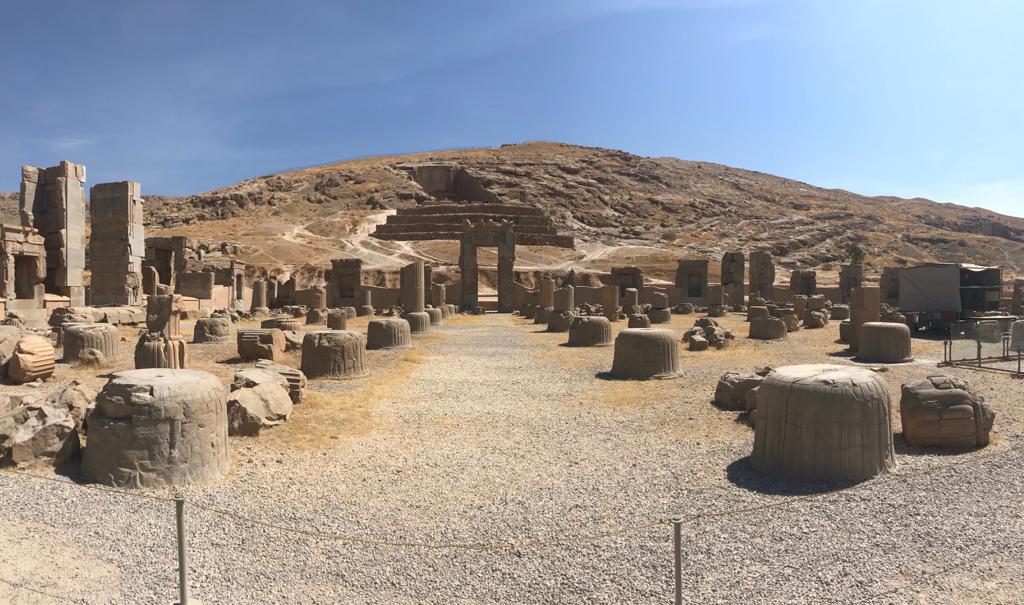 Shiraz to Yazd (440km)
From Shiraz, the convoy sped northeast towards Yazd, the capital of Yazd province. Along the way, they made a pit stop about 60km into the drive to see Persepolis, one of the world’s greatest archaeological sites.

Founded by Darius I in 518 BC, Persepolis was the capital of the Achaemenid Empire. Inspired by even more ancient structures from Mesopotamia, it was built on an immense half-artificial, half-natural terrace into a huge palace complex.

Upon arrival in Yazd, a UNESCO World Heritage Site, the team got to know first-hand why the city is also known as a City of Bicycles: Yazd has the highest number of bicycles per capita in Iran!

The next day, on a day tour of the city, they got to see sites such as Dowlatabad Garden, Jameh Mosque and Amir Chakhmaq Complex.

Dowlatabad Garden was first constructed around 1750, and is considered an architectural jewel that attracts visitors near and far. Besides the main pavilion, another significant structure holds a wind tower (badgir) that — at 33m — is the tallest in Iran.

The 12th century Jameh Mosque, which is still in use today, is depicted on the obverse of the country’s 200 rial banknote. The pair of minarets that flank the main entrance — at 52m — is the tallest in Iran. 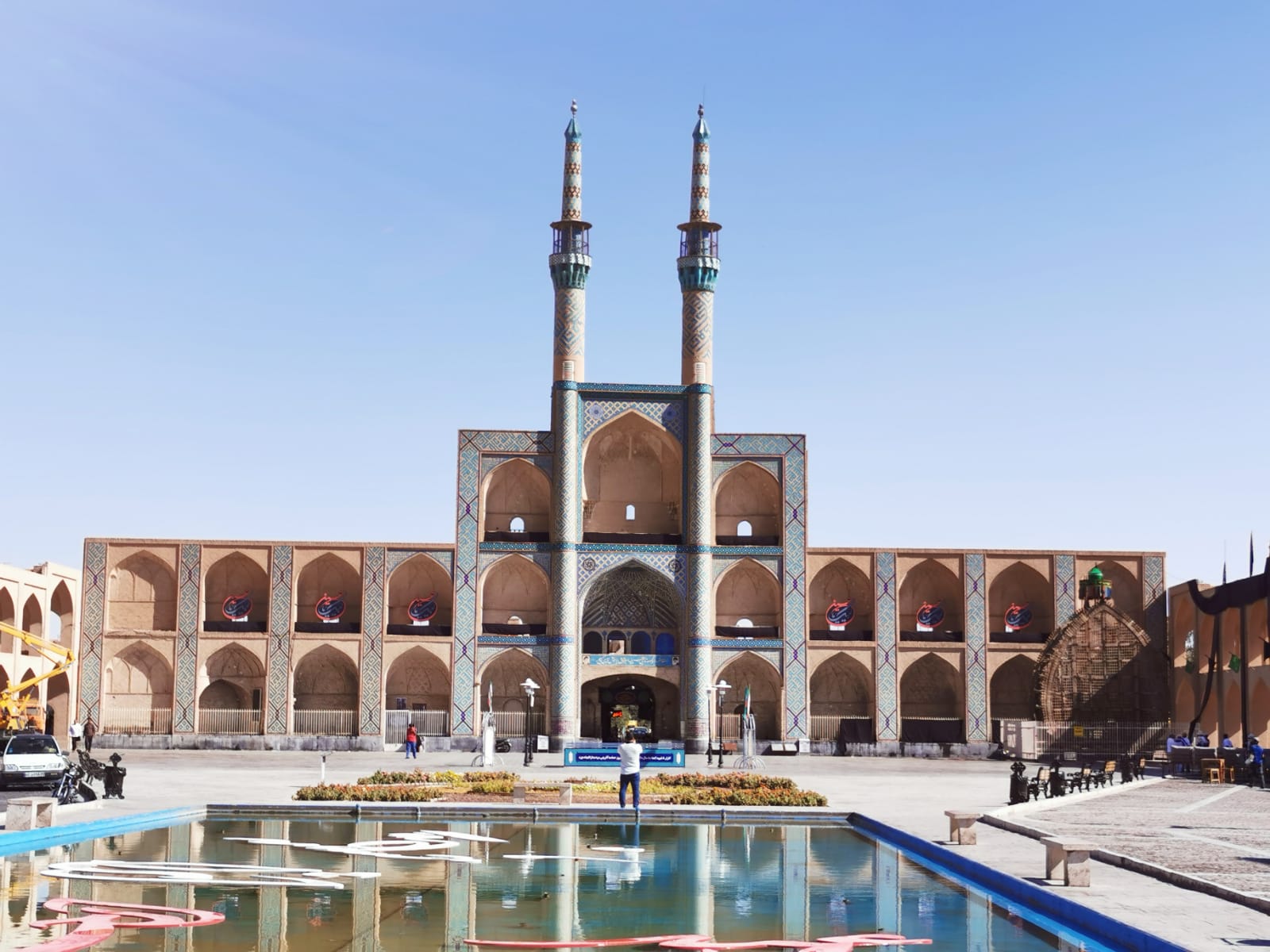 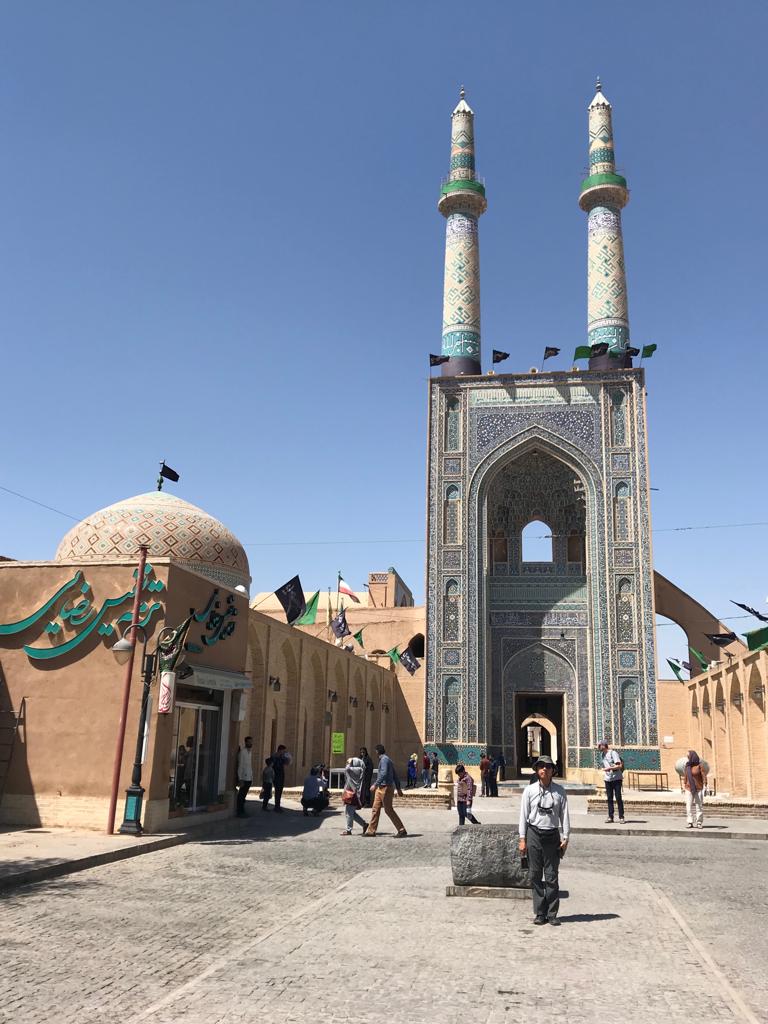 Yazd to Masshad (900km)
The next day, it was off to Ferdows, located about 540km north east of Yazd. After resting a night, the participants carried on in the same general direction to Masshad.

Masshad is not only second-largest city; it is called the Holy City of Iran because it contains the tomb and shrine of Islam’s eighth Shia Imam, Imam Reza. This shrine attracts millions of pilgrims from around the world, giving the city a spiritual and multinational feel. Not surprisingly, the shrine was part of the convoy’s itinerary.

The participants also took advantage of Masshad’s position as a hub of the saffron trade to pick up a little of this expensive spice at a local bazaar. How expensive? The spice is known as ‘red gold’ because of its colour and because it can be as expensive as — or even costlier than! — gold of an equivalent weight. 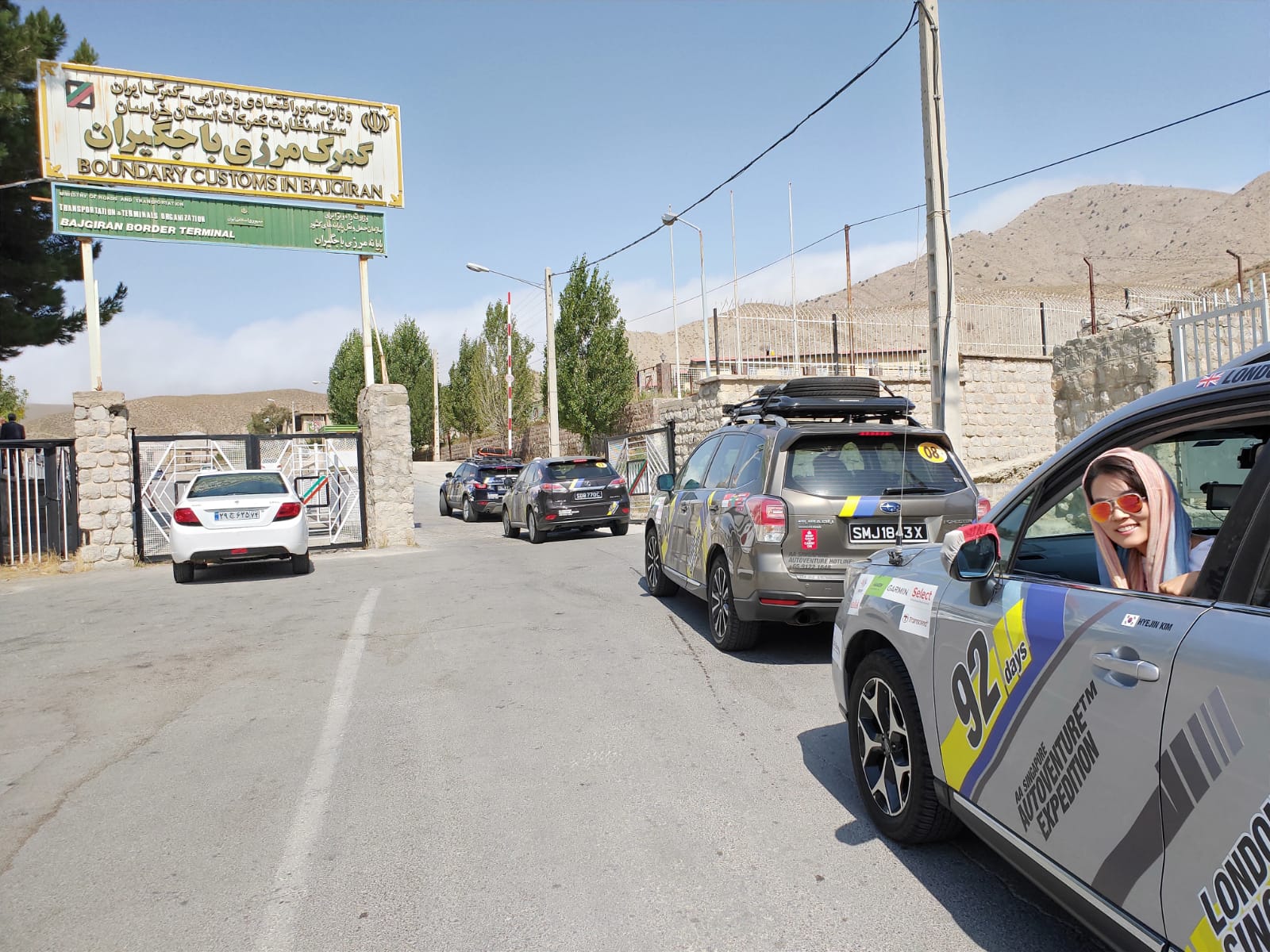 Masshad, Iran to Ashgabat, Turkmentistan (280km)
After spending the night in Masshad, the convoy was anxious to stay alert for the next stage, which finally took them out of Iran and into the country of Turkmenistan.

The reason for their anxiety? The road towards the Bajgiran border terminal is buffeted by heavy winds and involves many hairpin turns!

Join us for the next instalment as we report on the convoy’s journey through Central Asia.