Zharkent, Kazakhstan, to Urumqi, China (710km)
About two months into the expedition, the convoy entered the Middle Kingdom on Day 62, on 8 October 2019, entering via the border town of Korgas, located about 35km away. This area contains a special cross-border, visa-free special economic zone for trade and shopping. It is also a dry port for transporting goods.

After staying one night in Korgas, the convoy carried on eastwards towards Dushanzi, located in an area known for its oil industry. After overnighting in Dushanzi, the team pushed on towards Urumqi, capital of the Xinjiang Uygur Autonomous Region.

Urumqi, according to the Guinness Book of World Records, is the city most remote from any sea in the world; it is also the largest city in Central Asia in terms of population, with about 3.5 million inhabitants as of 2015. 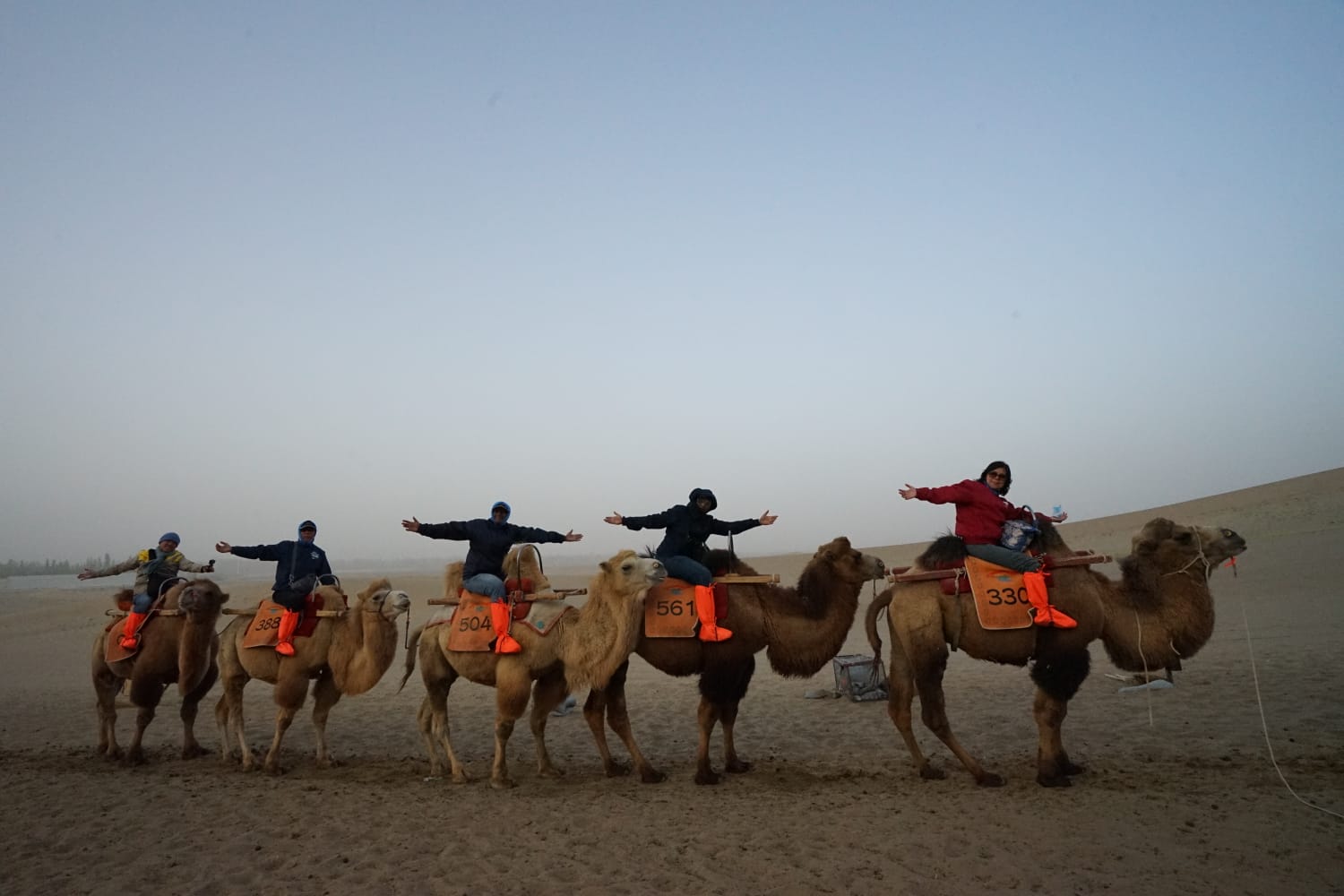 Urumqi to Dunhuang (1,010 km)
From Urumqi, the team headed for Tulufan. This city is located along the ancient Silk Road, and built on a fertile oasis. The next place on the expedition list was Hami, sited roughly 400km away from Tulufan, and home of the deliciously sweet Hami melons.

Breaking with the generally eastward trajectory of the expedition, the convoy headed south for Dunhuang. This city prospered in ancient times because it sat at the crossroads of two trade routes on the Silk Road. Today, what usually attracts visitors to the city these days are the numerous Buddhist caves located around the city, the most famous of which are the Mogao Caves. The Mogao Caves, also known as the Thousand Buddha Grottoes, contain some of the finest examples of Buddhist art spanning a period of 1,000 years! The participants took the opportunity to go on a camel ride while viewing the incredible sand dunes of the area. 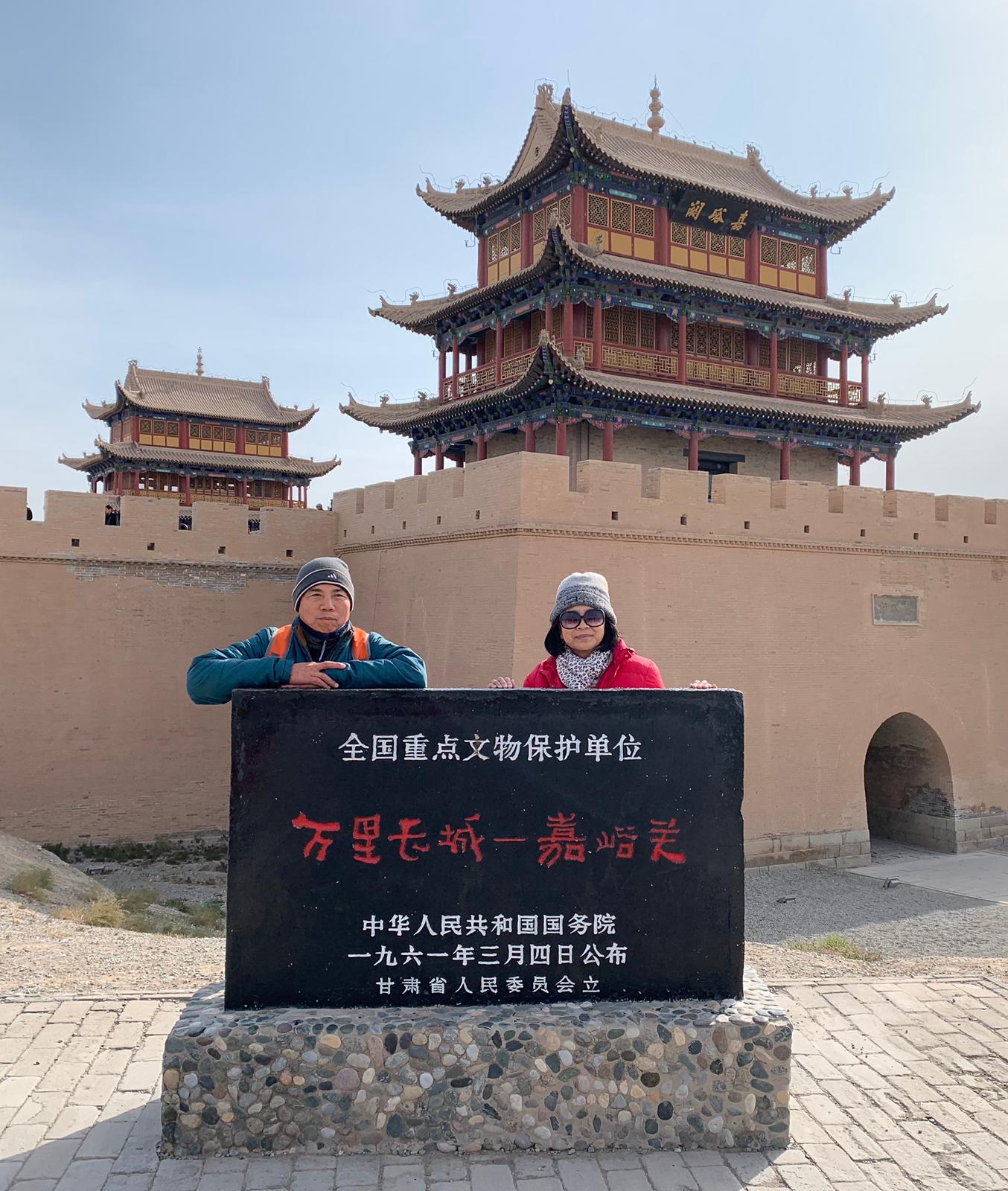 Dunhuang to Tianshui (1,420km)
Resuming an easterly direction, the convoy headed for Jiayuguan, a city built from its proximity to Jiayu Pass. The pass was built during the Ming Dynasty, and is part of the Great Wall of China. However, rather than stones and bricks, the sections here were built with rammed earth. After exploring the city and its surrounding walls, the convoy headed for Wuwei. 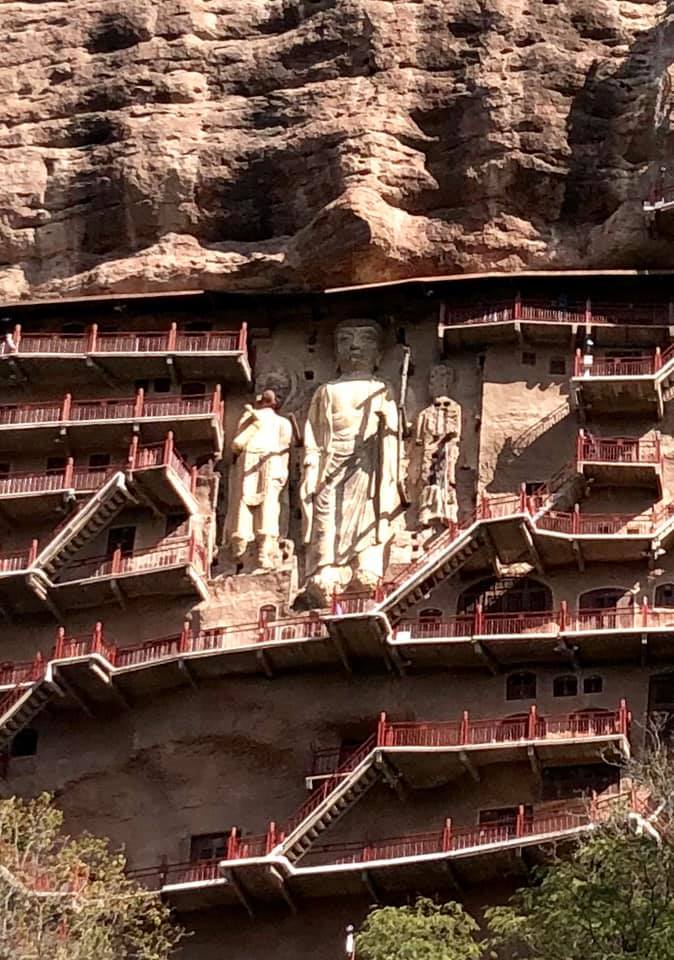 The area around Wuwei has been inhabited for the last 7,000 years, so it is no surprise that it is considered one of the most famous historical and cultural cities of China. One of the best-known historical building is the Confucian Temple, the largest and best-preserved temple in Gansu province. 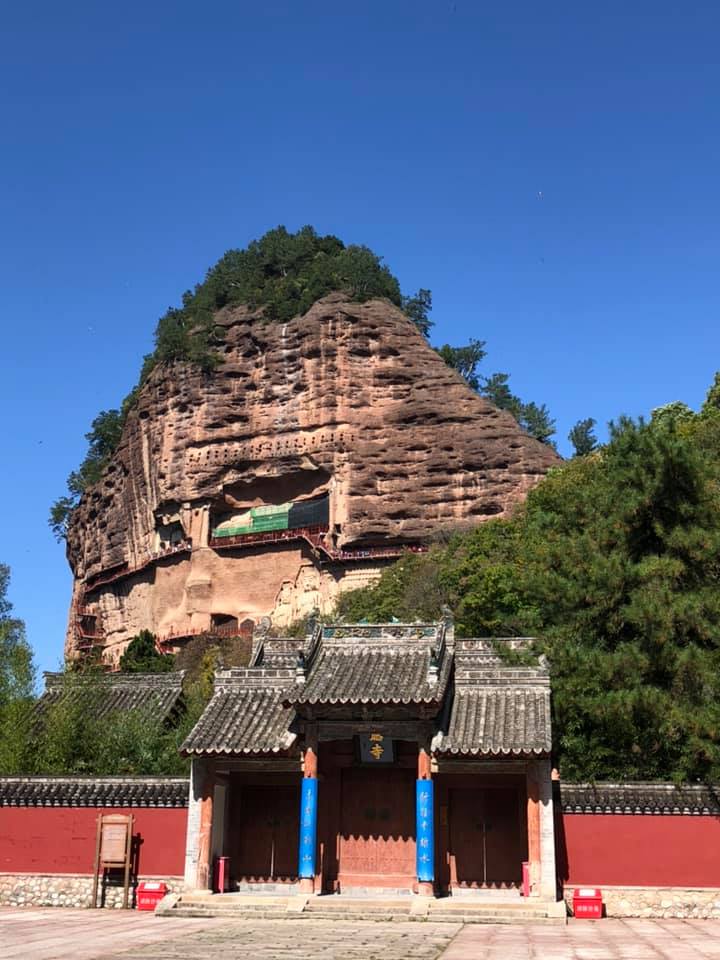 It was then time to venture towards Tianshui. This is another one of those drives that headed more south than east. Like Dunhuang, Tianshui also has its own set of caves with Buddhist carvings. The Maiji (so named because the mountain in which it is carved out  resembles a stack of wheat) Caves are a series of 194 Buddhist caves and niches that contain more than 7,200 clay statues, as well as murals spanning more than 1,300sqm. But the sheer beauty of these artefacts was not the only thing that took away the breath of our convoy members: they had to move from cave to cave via wooden planks hanging precariously off the cliff face! 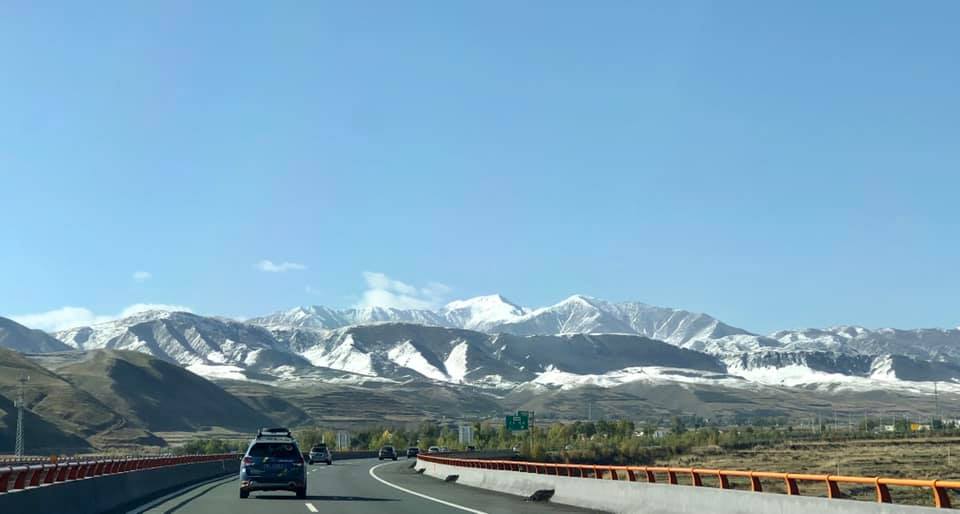 Tianshui to Xian (340km)
On Day 71 of their epic journey, the team set off for Xi’an, the starting point of the Silk Road, and home of the ruling houses of the Zhou, Qin, Han and Tang dynasties. It is also one of the Four Great Ancient Capitals of China, the others being Luoyang, Beijing and Nanjing. 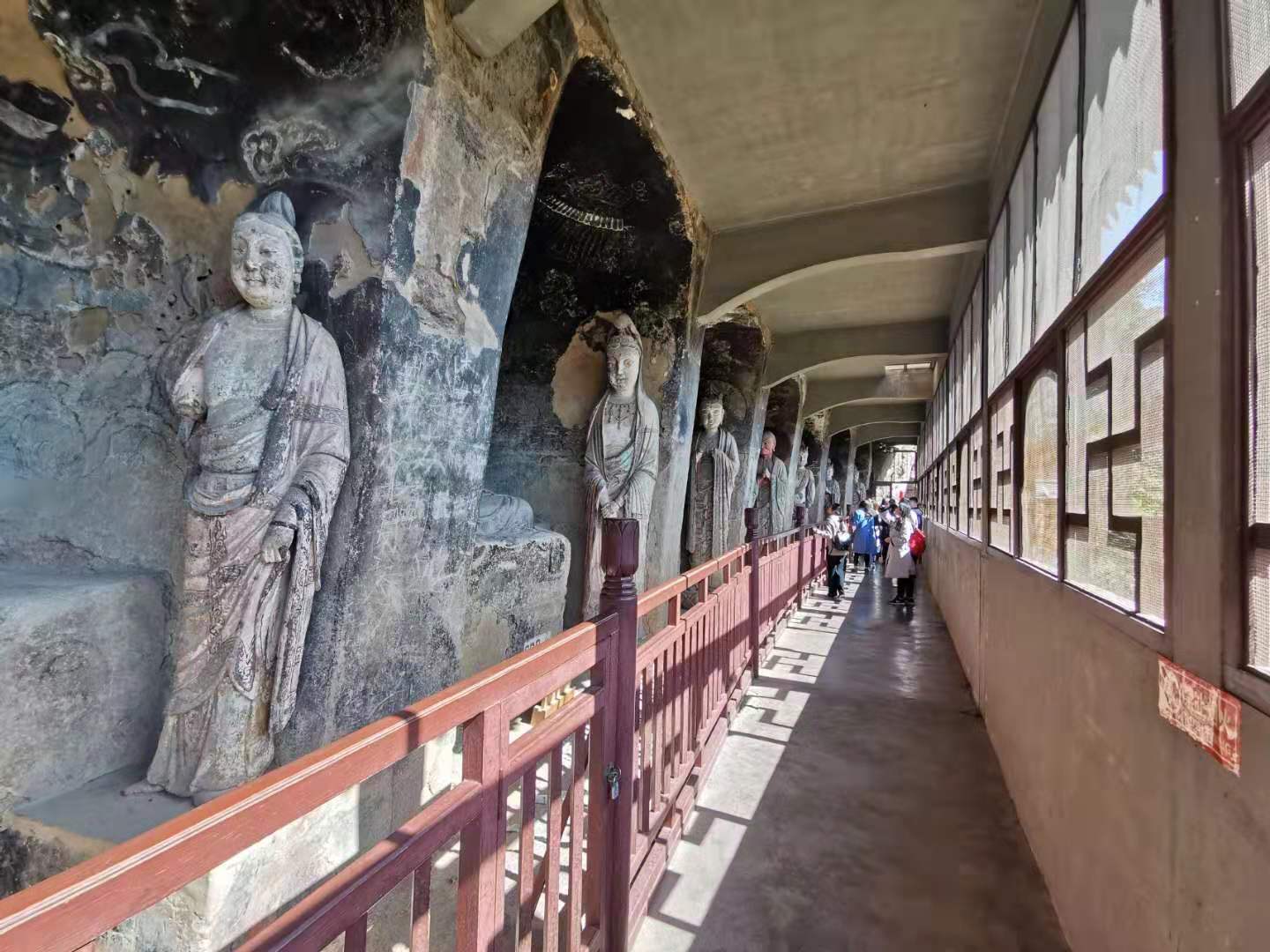 One of the unmissable places of interest in this metropolis is the Mausoleum complex of Emperor Qinshihuang, first emperor of a unified China. The complex, guarded by the world-famous terracotta army, is located some 40km east of the city centre. The team also visited the Small Wild Goose Pagoda. When it was built between 707 and 709 during the Tang Dynasty, it stood 45m tall; it lost 2m in an earthquake that took place in 1556. 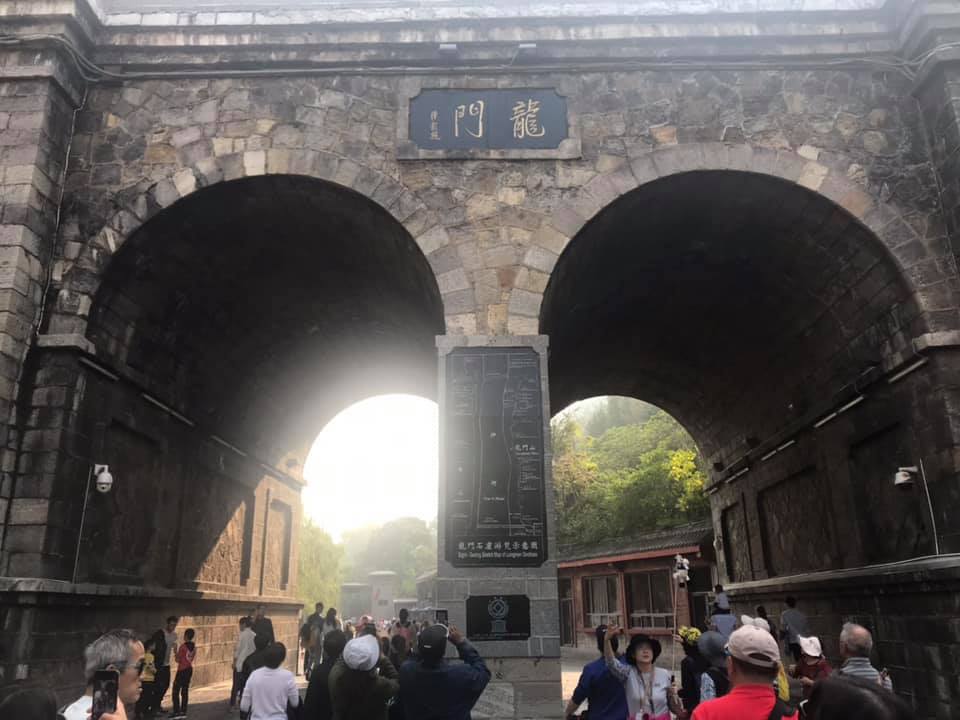 Xian to Luoyang (via train)
The next day, the expedition participants boarded a high-speed train to visit the city of Luoyang, one of the Four Great Ancient Capitals of China. It was the capital of nine dynasties and also a hub for Buddhism. Not surprisingly, the city also boasts an amazing series of caves — called Longmen Grottoes — filled with Buddhist carvings. There are as many as 100,000 statues within the 2,345 caves, ranging from 25mm to 17m in height. The Grottoes made it into the UNESCO World Heritage List in 2000.

With many other ancient sites to view, the team stayed in Luoyang for two nights, before taking the train back to Xian. 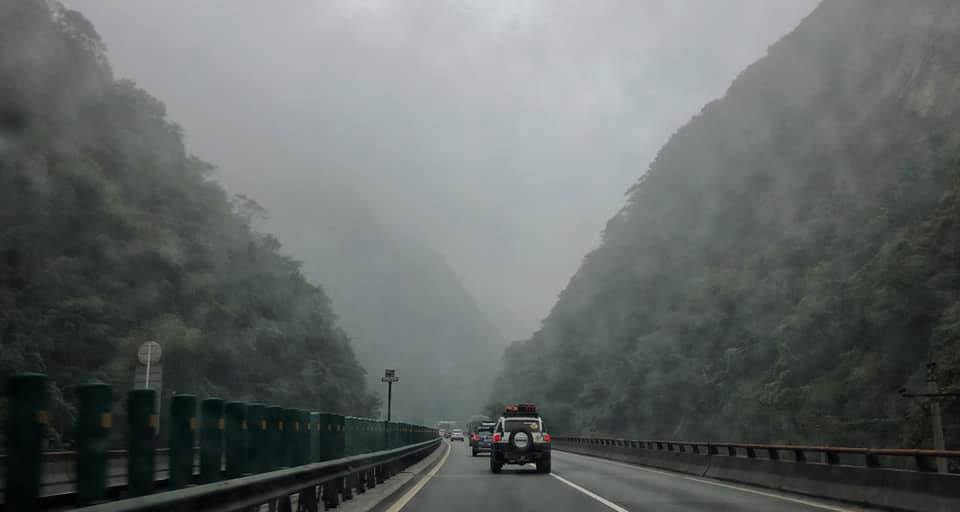 Xian to Chengdu (740km)
Back in Xian, the team had to count on their own driving skills again to continue the journey as they set off for Chengdu, the capital of Sichuan province. For once, instead of tracking east or south, they were headed southwest for this leg of the trip.

While it doesn’t boast many major tourist sites, Chengdu is UNESCO’s first-ever City of Gastronomy. Besides a strong teahouse culture, this is also the place to be if you wish to see China’s cutest creatures: the giant pandas! The city’s Giant Panda Breeding Research Base is home to about 120 giant and 76 red pandas. Before making their way to Jinghong, the convoy were honoured to join in a Dinner Reception hosted by Singapore Tourism Board. The dinner was a memorable one, especially so when it was graced by Consulate-General Mr Steven Pang. AA Singapore’s President, Mr. Bernard Tay, and CEO, Mr. Lee Wai Mun, also travelled down to Chengdu to join the convoy for the dinner. Chengdu to Jinghong (1,450km)
From Chengdu, the convoy headed towards Yibin, located at the confluence of the Min and Jinsha Rivers. These two bodies of water combine to form the Yangtze River as the water flows south out of Yibin. The team took a river cruise to view the 71m-tall Leshan Giant Buddha, located in the Mount Emei Scenic Area. Carved out of a cliff face during the Tang Dynasty, the statue was meant to calm the turbulent waters that vessels often faced when travelling down the river. Other tourist sites around Yibin include the Bamboo Sea, Xingwen Stone Forest, and Cuiping Mountain Park.

Next stop for the participants was Kunming, the capital and largest city of Yunnan province, an area that boasts 26 native ethnic minorities. Located about 640km away from Yibin, it is known as the City of Eternal Spring for its year-round pleasant climate.

The next day, the team drove another 550km southwards and ended up in Jinghong, located near the southern edge of Yunnan province, stopping to have lunch at Pu’er Town, named after the famous variety of Chinese tea.

Jinghong, China, to Chiang Rai, Thailand (440km)
On Day 84 of the expedition, which fell on 30 October 2019, the convoy made its way from Jinghong in China to Chiang Rai in Thailand, passing through Mongla, Myanmar, and across the nation of Laos.

In the next (and final) instalment of our series of expedition write-ups, we will track the convoy’s final few days as they make way down from Thailand, through peninsular Malaysia, and into the Lion City.