While driving around Singapore, you are likely to have zipped past local landmarks without a second’s thought about their surprisingly colourful past. Let us enlighten you about three such spots.

With its futuristic skyscrapers and modern attractions, it is sometimes easy to forget that Singapore has a history that goes back 201 years. There are many places harbouring little-known yet fascinating history — some of these places may even be located near where you live! 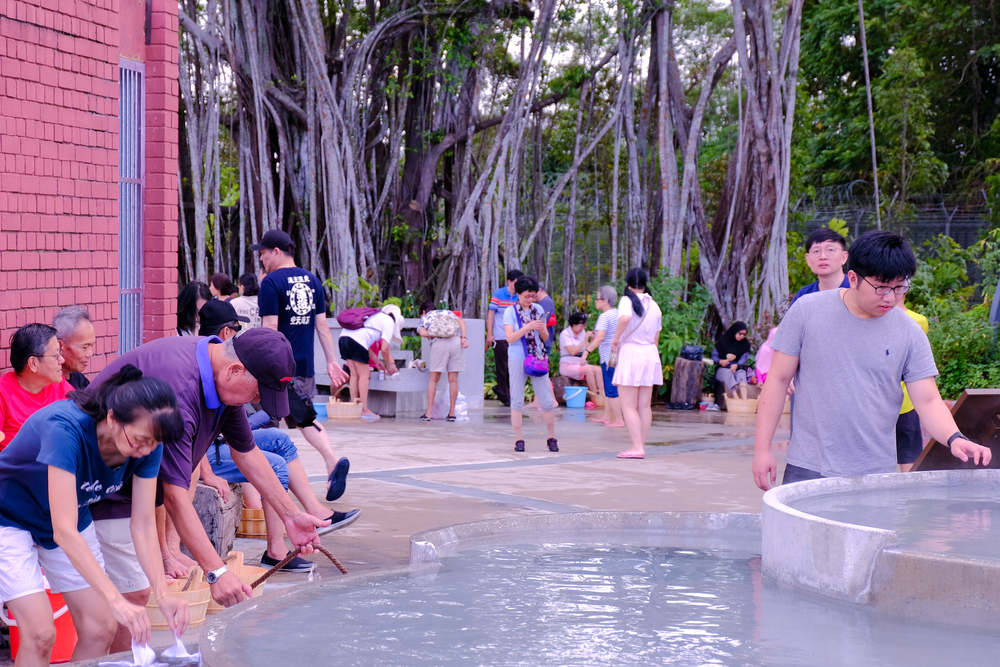 Singapore used to bottle water from a hot spring
The whole of Singapore came to know of a natural hot spring in Sembawang on 4 January 2020, when the area was reopened as a 1.1-hectare park after a multi-million dollar revamp. It now features a cascading pool for anyone to enjoy a footbath. Surprisingly, a number of people are unaware of this spring’s existence even though it has appeared in the news sporadically over the course of the century.

The spring was discovered in the early 1900s by municipal ranger W A B Goodall in a pineapple estate belonging to Seah Eng Kong, a merchant whose father was prominent community leader Seah Liang Seah. This spring was one of four discovered near each other, but the other three were covered up so that spring water is concentrated through this one.

When Seah sent a sample of the spring water to London for analysis, it was deemed comparable to water from mineral springs from around the world. According to 29 November 1909 edition of The Straits Times, it contained a large amount of silica, more sodium chloride and less lime salt, and its organic purity made it safe for drinking and bathing. Seah established the Singapore Natural Mineral Hot Springs Company to bottle, aerate and sell the spring water under the brand ‘Zombun’ before he sold the company to beverage company Fraser and Neave (F&N) in 1921.

If you ask former residents of the old Chong Pang village, many of whom still reside in the Yishun and Sembawang neighbourhoods, they would remember it as part of the landscape when they were growing up. Villagers used to flock to the spring with their own pails and tubs to collect the water for a foot or body soak. Salon 513 owner Joyce Ang, whose family used to run a gas supply store next to the old Sultan Cinema, remembers two hot springs, one of which was at the site of the former bottling plant of F&N. The factory has since been replaced by a condominium named Seletaris, which was also the name of the spring water bottled under F&N. When CHIJMES was a vegetable garden
It is a well-known attraction housing dining hotspots, watering holes, and lifestyle shops. It also boasts a deconsecrated chapel where the wedding scene of Crazy, Rich Asians was filmed. Which is why is hard to imagine CHIJMES as a place some used to call their school or home.

With a history dating back to the mid-19th century, CHIJMES has many stories to tell.  Its history as a school began with the purchase of a house at the corner of Victoria Street and Bras Basah Road by Rev Jean Marie Beurel of St Brieu in 1852 for 4,000 francs. The house still stands today, and is known as the Caldwell house.

CHIJMES used to house an orphanage and a boarding school on its grounds, together with nuns’ quarters and the Convent of the Holy Infant Jesus school for day pupils.  In 1931, it added a Chinese section, Victoria Girls’ School, later renamed St Nicholas Girls’ School. Though it took in mostly girls, some boys — notably David Marshall, Singapore’s first chief minister — were also educated there between the 1920s and 1930s.

The chapel, which was built in 1903, had its stained-glass windows produced in Lyon, France, and Bruges, Belgium. During World War II, the grounds of the convent were converted into vegetable gardens, and tended to by the nuns, boarders and day pupils to grow food for inmates.

A royal connection in Siglap
Located in the east of Singapore, Siglap a quaint neighbourhood that gives off a casual vibe; it’s where you can chill without having to dress to impress. Before land reclamation works took place in the mid-1960s, the area was known for its fishing villages and coconut plantations that lined the coast where the housing estate of Siglap stands today.

Siglap was originally inhabited by fishermen from Sumatra, Indonesia. There are varying accounts about the founding of Kampong Siglap, but the most popular one is that it was founded between 1819 and 1822 by Tok Lasam, a prince from Minangkabau in Sumatra. This explanation best accounts for why the graves of Penghulu (‘chieftain’ in Malay) Tok Lasam, his wife, and his Panglima (‘commander-in-chief’ in Malay) can still be found at the end of Jalan Sempadan.