Are you someone who enjoys travelling to places that have interesting architecture and history? Singapore is known for its pursuit of modernity, but there are certainly areas on our island that have retained their historical charm. Below are three such neighbourhoods worth exploring. KAMPONG GLAM
Kampong Glam was originally a fishing village allocated to the Malay, Arab and Bugis communities when the British took over Singapore in 1819. This district then became home to Malay royalty as well as diverse communities, such as the Javanese, Sumatrans, Banjarese, Baweanese and Arabs.

Sultan Husain built a mosque here in 1826, close to his palace. The iconic Sultan Mosque, or Masjid Sultan— a landmark in the district — is a newer mosque that was completed in 1928. It is known for its Indo-Saracenic architecture, with minarets and balustrades. The dome is embellished with glass-bottle ends contributed by the poor towards the building of the mosque. During Ramadan, a festive bazaar is held around the mosque, with numerous food stalls selling traditional Malay snacks and specialties.

Streets that were once lined with blacksmiths and traders are now filled with quaint shops — selling Persian carpets, handmade perfumes, and traditional clothes — jostling with hipster cafes, vibrant street art, and trendy boutiques. 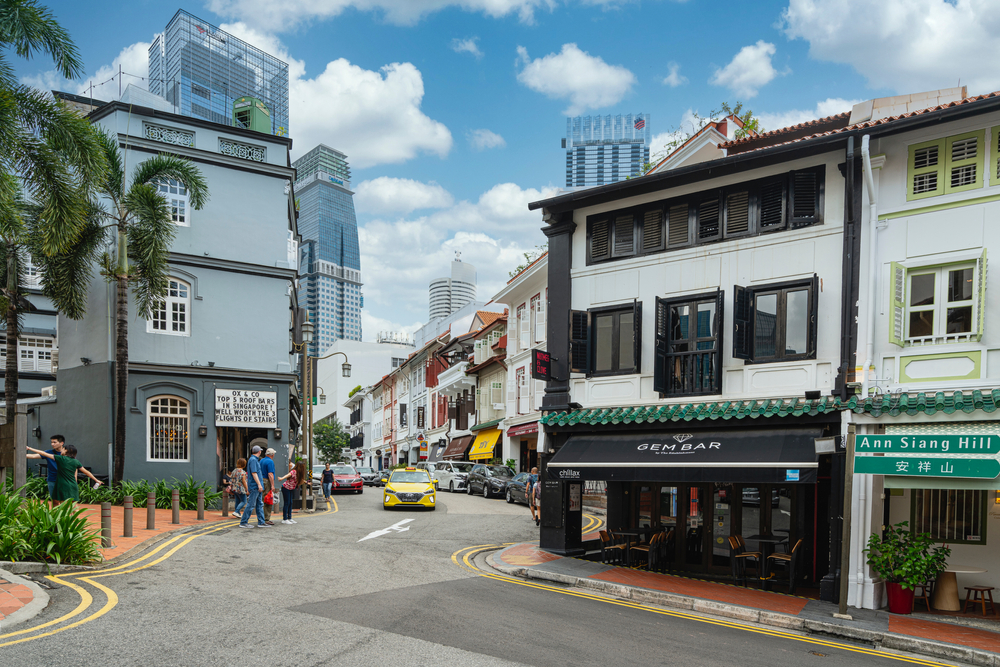 CHINATOWN
Chinatown was the living quarters for most Chinese immigrants in the late 19th century. The settlers built rows of shophouses resembling their homes back in China. The area was named niu che shui after the bullock carts that were used to fetch water from the wells located near Ann Siang Hill.

Today, the maze of narrow streets is lined with Chinese medical halls, traditional confectioneries, souvenir shops, and indie boutiques. Besides a variety of affordable eateries, the place is also known for places of worship, such as the Sri Mariamman Temple, the Buddha Tooth Relic Temple, and the Masjid Jamae mosque.

To find out more about the historical changes that Chinatown has gone through, stop by the Chinatown Heritage Centre, located within three restored shophouses on Pagoda Street. As Tanjong Pagar was located in the middle of the docks, it became an enclave for Chinese and Indian immigrant workers. Rickshaws transported travellers from the docks to other parts of the city. As the rickshaw business flourished, the Jinrikisha Station — situated at the junction of Tanjong Pagar Road and Neil Road — was set up in 1904 by the government as a central depot for rickshaws. The unusual-looking building features an octagonal cupola atop a square tower. In 2011, Hong Kong movie star Jackie Chan bought the building. Today, it is occupied by restaurants, pubs, music lounges, KTVs and offices.

Along the stretch is 9 Neil Road, a two-storey revitalised shophouse. The site of Singapore’s first urban restoration project, it houses Tea Chapter, a Chinese teahouse famed for hosting Her Majesty Queen Elizabeth II during her state visit to Singapore in 1989. Another restored building, 89 Neil Road, is the Eng Aun Tong factory — it was used by the Haw Par brothers, creators of the world-renowned Tiger Balm ointment.

While its history remains part of its charm, Tanjong Pagar today is popular as a modern hub and a foodie paradise, with many restaurants featuring a range of cuisines.

CHINA’S RICH HERITAGE AND CULTURE
With a history that extends back at least 5,000 years, China has plenty to offer to heritage and culture buffs. Sign up for AA Singapore’s webinar (27 November, 11am–12pm) to view some of these amazing spots. Along the way, you can also pick up driving tips applicable to the roads there. Limited slots are still available. Register your interest here today!